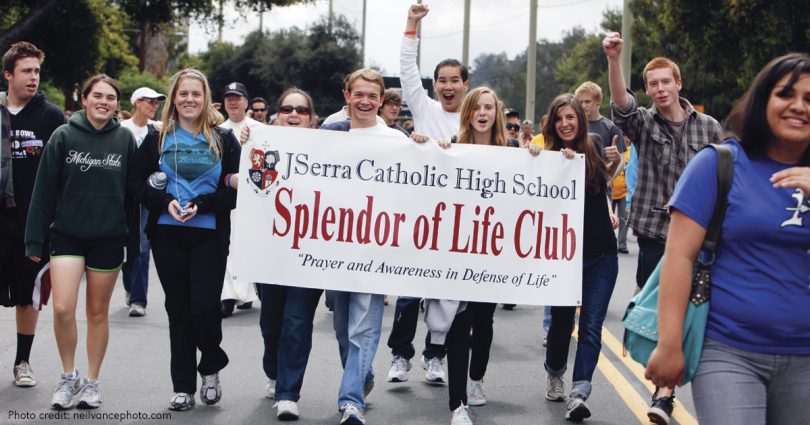 “Abortion is our fight!” pro-life youth of today are shouting by word and deed. In Colorado Springs, Colorado, and Southern California, youth are literally walking their talk—by organizing pro-life walks to end abortion. Here are their amazing stories of faith in action.

A child shall lead them

“Abortion is the civil rights issue of our era,” explained 13-year-old Zack Goodman, who, at age 10, organized the March4Life Rocky Mountain in Colorado Springs, held annually on Martin Luther King Day (the third Monday in January). “Dr. King fought for human dignity for the blacks, who weren’t being treated as full humans. Abortion is pretty much the same thing, only it’s a difference of whether the person has been born or not.”

How does such a young child hear and heed a call to pro-life work? The eldest of four children, he began attending daily Mass when he was 18 months old and, at age six, became a daily communicant. “I think once you start receiving daily Communion, God works in you in different ways if you’re open to listening,” says Christina Huschak, Zack’s mother, adding that his confirmation at age nine gave him an extra measure of grace. “Kids have no fear at that age. They believe in being soldiers of Christ.”

Because Zack was precocious and orthodox religious formation was a family priority, Christina and her husband, Phill Goodman, a U.S. Air Force captain, decided to homeschool their children. “We’re going to stand in judgment for what our children have learned and what we’ve taught them,” Christina declared.

In January 2008, while Zack and Christina watched the March for Life in Washington, D.C., on EWTN, he asked his mother if they could attend the Walk for Life West Coast in San Francisco the following year. “It’s a bit far,” she replied, “and it would cost some money.” Zack then announced, “We’ll just have to start one here!”

When he contacted the office of Bishop Michael Sheridan in Colorado Springs, he was instructed to submit a plan to the diocesan Respect Life office. He also designed a logo: A cross in the middle of seven mountains, with a red rose in the center of the cross memorializing aborted babies.

He wrote a pro-life play and launched Youth 4 Truth, an ecumenical youth group aimed at engaging young people in pro-life activities. “Once you tell [young people] the truth and they come to accept it as the truth, they’re, like, ‘Please take me along. Let me help you!’” Zack said, with contagious enthusiasm.

On the day of the first March, held in 2009, about 250 people attended Mass at St. Mary’s Cathedral, followed by an assembly at a nearby park. More than 500 marchers then processed 1.5 miles to a Planned Parenthood facility.

Zack and his comrades haven’t been timid about inviting big-name speakers. Though she had a previous commitment, Dr. Alveda King, niece of Dr. Martin Luther King Jr., sent a videotaped message for the 2009 March. In 2010, Rebecca Kiessling, who was conceived through rape, asked the crowd, “If you’re pro-life except in cases of rape, are you telling me I shouldn’t be alive?” In 2011, Pastor Walter Hoye II, founder and president of the Issues4Life Foundation and the California Civil Rights Foundation, told the throngs that abortions are committed on black women and their babies at three times the rate for white women.

“[Zack] is creative and courageous,” observed Bishop James Conley, auxiliary bishop of the Denver archdiocese, and “the face of the new generation of pro-life activists.”

While Zack is uncertain about God’s future calling for him in pro-life work, he plans to continue his Precious Feet Pin Challenge—a project he started as a member of the Columbian Squires, a Knights of Columbus program for young Catholic men. He’s the youngest of only 26 Squires worldwide who have earned the program’s highest rank: Squire of the Body of Christ.

After weekend Masses before the Marches, Zack and fellow Squires have passed out, to young children, thousands of Precious Feet pins that depict the feet of a 10-week-old preborn baby. With the Precious Feet pins, “Even four- and five-year-olds will know that it is a baby,” Zack said emphatically. “If they know it is a baby and later in life face an unplanned or crisis pregnancy, hopefully they will save the baby’s life.”

Zack doesn’t brag about his accomplishments. He knows he’s an instrument in God’s hand—as everyone can be. “If we all let our little lights shine, we can set the world on fire,” he declared.

A Rose Bowl for life

Fittingly, the first annual walk4LIFE So Cal (Southern California) was held at the Rose Bowl in Pasadena on Sunday, March 27, 2011, two days after the Feast of the Annunciation. According to the Church’s liturgical calendar, the Virgin Mary was already two days pregnant with Jesus! Under the title of Our Lady of Guadalupe, she’s the patroness of the pro-life movement.

“We wanted to hold the event in October—Respect Life Month—but no dates were available,” recalled Carol Golbranson, a mother of seven who helped teens get the walk underway.

Ten years ago, 22 Catholic homeschooling families founded St. Monica Academy in Pasadena, an accredited institution with the mission of educating children in grades 1–12 in “faith, reason and virtue through a classical education in the Roman Catholic tradition.” Students are trained to become “citizen leaders.” Not long ago, the Academy’s pro-life club, the Crusaders for Life, decided it wanted to do something really big for life, and get other teens and schools involved. “My generation will need to step up eventually,” said 15-year-old Rachel.1  “If we don’t begin now, then when—when we’re too old to make a difference?”

Inspired by San Francisco’s Walk for Life, the Crusaders came up with the bold idea to hold a family-friendly walk4LIFE around the Rose Bowl, the iconic college football stadium in the shadow of Hollywood’s decadent movie industry. They asked their parents for help, and LIFEsocal, a group of pro-life high school and college students, was formed.

Twelve mothers, with 71 kids between them, assumed the logistics. Kids can’t rent the Rose Bowl, or write checks or sign contracts, explained Susan Swift, another mother of seven. “We’re all little small voices, but together we can scream!” she added. Swift, who is also a www.BigJournalism.com contributor, was formerly a movie and TV actress, and later a lawyer.

While mothers worked behind the scenes, teens were unabashedly promoting the Walk. Monica, age 16, helped write and send out news releases geared to teens. “If you truly believe something is wrong, you have to try to fix it,” Monica said. “The pro-life cause is relevant to young Americans because the abortion industry is targeting young people.”

Other teens invited schools or sold tickets to the event. One teen designed the website. Still others distributed flyers, which featured LIFEsocal’s motto, “Life is for everyone! No exceptions, no compromises, no apologies,” and a baby’s tiny feet encircled by a red heart, accompanied by these words: “Listen for the beat … Can you hear it?”

And did they hear it! Over 6,500 pro-lifers of every age attended: tots on dads’ shoulders, elementary- and middle-school students, grandparents, college students, and teens from over 60 schools. The walk4Life was sponsored in part by the Right to Life League of Southern Californiaand the San Gabriel Valley Knights of Columbus chapter.
Archbishop Jose Gomez, the newly appointed head of the Los Angeles archdiocese, opened the event. Two days ago, “we celebrated the Solemnity of the Annunciation,” he said, and asked why God chose to enter the world through a mother’s womb. The answer? “To show us that human life is sacred, to show us that every life is precious to God, to show us that each of us is a child of God who is loved.”2

Spirits were high as the masses walked the 2.5 miles around the Rose Bowl stadium, some praying the Rosary and others singing. The event ended with a LIFEfest, which featured live music, food, kids’ activities, and booths sponsored by various pro-life ministries.

Molly, a UCLA student, interviewed 100 walkers, young and old, asking what they do for the pro-life movement. “Sometimes it seems that we’re fighting an uphill battle,” she reflected. “Seeing so many pro-life people is very energizing, very encouraging. Events like this bring people together to share information and rejuvenate each other in our effort to end abortion.”

“Every prayer, every good deed is helpful,” Monica said confidently. “God is on the pro-life side, and anything we do He’ll ultimately use for His glory, to end abortion. It’s just a matter of when.”

1Surnames have been omitted to protect the privacy of the youths who organize the walk4LIFE.