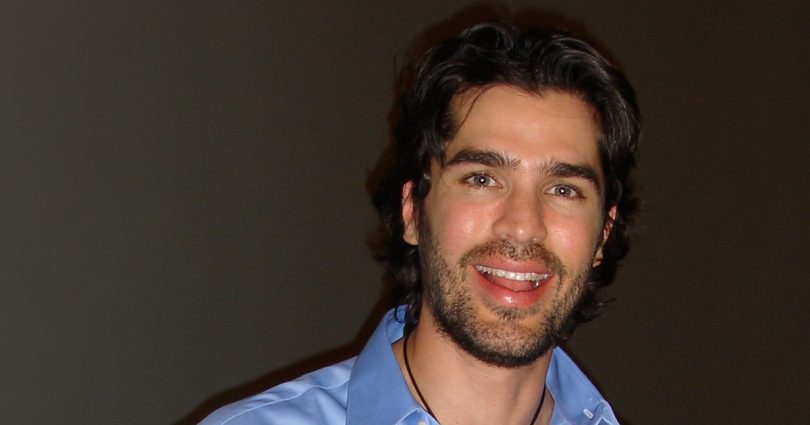 It’s not often that the Los Angeles Convention Center is filled with people proclaiming the sanctity of life. Yet, on Pentecost Sunday, May 23, over 10,000 people gathered at the Convention Center for the firstever Unidos por la Vida (Spanish for “United for Life”) conference, hosted by internationally famous actor, producer and pro-life activist Eduardo Verastegui.

The 12-hour conference included Mass and a procession with an image of Our Lady of Guadalupe, as well as music and entertainment by several popular Mexican celebrities, inspirational presentations by various speakers, testimonies and a birthday celebration for Eduardo that included his family.

The audience was electrified by Eduardo’s admonishment to go out and spread the pro-life message. He was joined by the Rev. Juan Rivas, LC, well-known in Southern California’s Latino community for his evangelization and pro-life stance. Father Rivas emphasized the importance of becoming involved in the pro-life movement.

At this year’s Colorado March for Life (held in Denver on January 22), Eduardo announced his support for Colorado’s human personhood initiative, which will be on Colorado’s November 2010 ballot as Amendment 62. “I am here to support the personhood movement and to ask everyone to sign the petition so we can pass this amendment,” he declared. “Coming from Mexico, I come from a different perspective where the personhood movement is a reality… In over half of the country—17 states already—life is protected from the moment of conception to natural death. I would love to see that reality here in America.”

The path to true purpose

Born and raised in the Mexican state of Tamaulipas, Eduardo moved to Mexico City in his late teens to pursue a modeling career. There he became a heartthrob as a member of Kairo, a popular Mexican band, and went on to star in Mexican telenovelas (soap operas). He admits that, during this time, he didn’t practice his Catholic faith.

In 2003, Eduardo got the lead in Chasing Papi, a Hollywood-produced romantic comedy. To prepare for his role, he received English instruction from a language coach who was a committed Catholic. Her challenging questions and his growing awareness of spiritual emptiness helped him see the futility of his hedonistic lifestyle and again embrace his Catholic faith.

He then decided to make movies that reflected his Catholic values, so he and two collaborators launched Metanoia Films, their own production company. Their first release was Bella (2006), a film with a clear pro-life message (see Celebrate Life, July-August 2007). It won the coveted People’s Choice Award at the Toronto International Film Festival in 2006 and the prestigious Legacy Award from the Smithsonian Institution’s Latino Center, in addition to numerous other awards and honors at film festivals worldwide. By the end of its 2007 U.S. theater run, Bella ranked among the year’s top 10 independent films.

Eduardo told Celebrate Life that when he was in New York City rehearsing for Bella, to research his character, he went into an abortion mill to grasp more profoundly the desperation and emotional distress unique to its clients. There he saw young women crying as they went behind closed doors for their procedures. He forgot about the film because he was in shock. And that experience changed his life forever

When Eduardo stepped outside, he saw a small group attempting to persuade clients entering the abortion mill not to go inside. Uponn offering to help them, they asked if he would talk to a non-Englishspeaking couple. When he said yes, he was suddenly facing a distraught pair from Puebla, Mexico, who recognized him from his telenovela roles and felt they had no other solution than abortion. Eduardo spoke with them for 45 minutes about everything on their minds. As a result, they chose life for their child. He also bought them some baby items.

Several months after returning to Los Angeles, Eduardo received a call from the man from Puebla. “Eduardo, this is Javier; I have great news! My boy was born yesterday, and I want to ask your permission because I would love to call him Eduardo.” Eduardo was speechless. Days later, he went to the hospital to meet the baby. He described holding Eduardito (Spanish for “little Edward”) for the first time as the most beautiful moment in his life.

The helplessness Eduardo saw in the women’s faces at the abortion mill made such an impression that he resolved to make it part of his life’s mission to offer help to other abortion-vulnerable women. Four years ago, he established a nonprofit international aid organization, Manto de Guadalupe (Our Lady of Guadalupe’s Mantle), which aims to provide material assistance “in various parts of the world in places of extreme poverty”; bring “a message of love, faith and hope”; and “help low-income pregnant women continue their pregnancies by offering them free medical assistance.”

An oasis of life in a desert of death

Eduardo also discovered extreme conditions much closer to home. The Pico Union area of Los Angeles is a Latino working-class neighborhood plagued by having the nation’s highest concentration of abortion mills within a single square mile: a whopping 10. Eduardo often prays and sidewalk counsels at the mills there on Saturdays. At the conference, he explained that soon after he started, he realized many of the women turned to abortion due to a lack of resources.

In a May 18 interview with EFE, a Spanish-language news agency, Eduardo described this zone as “a true desert of death. There we want to put an oasis of life with Centro Médico Guadalupe, to help pregnant women choose life with dignity and support.

One of his sidewalk counseling resources is his own pro-life video, Dura Realidad (A Hard Truth), which contains graphic abortion footage and explains the racist motives behind the abortion industry’s targeting of ethnic minorities—resulting in the abortion of almost 300,000 Latino babies in the U.S. each year. He told EFE his organization has saved at least 500 babies so far, “and that’s only counting the testimonies received at the foundation.”

Karyme Lozano, a famous Mexican actress, singer and fellow Los Angeles resident, has joined Eduardo in his sidewalk counseling for about a year. In early 2009, she underwent her own dramatic reversion to Catholicism and lifestyle change, influenced in part by Eduardo’s good example. Now a Manto de Guadalupe board member, Karyme both promoted and participated in Unidos por la Vida.

Eduardo said that Manto de Guadalupe plans to make the Los Angeles conference an annual event and hopes to break ground for the clinic in the Pico Union area soon. Given the tremendous need for pro-life medical services in the “the desert of death,” he might make as much of a mark on the pro-life movement in California— and beyond—as he has on the entertainment world.