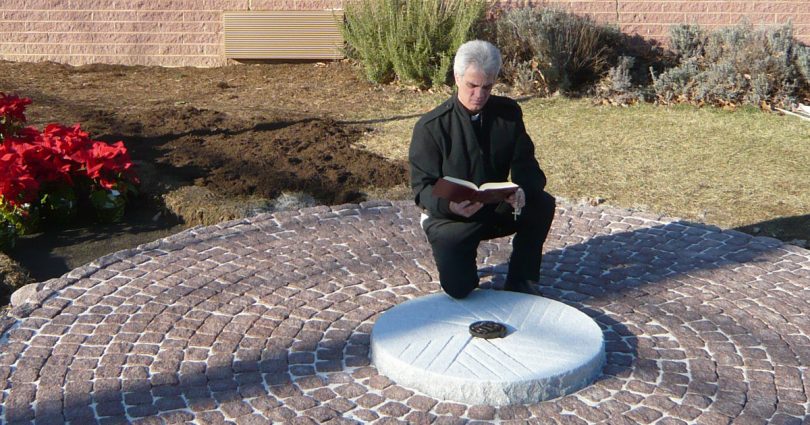 I am pastor of Our Lady of Grace Catholic Church in Romney, West Virginia and on our church grounds is a Memorial to the Unborn and the Canon 915 Millstone Memorial. The latter reminds us that Canon Law 915 says: “Those who have been excommunicated or interdicted after the imposition or the declaration of a penalty as well as others who obstinately persist in manifest grave sin are not to be admitted to Communion.”

On January 7, the Feast of Saint Raymond of Pennafort, patron of Canon lawyers, we placed a capsule under the bronze medallion inscribed with “Canon 915.” The sealed capsule contains Church documents, the Code of Canon Law, bishops’ statements, various news articles and other items connected to current events regarding Canon 915.

The Millstone Memorial brings attention to the present scandal by which some of the faithful may be caused to falter in their belief in the Real Presence of Jesus Christ in the Most Blessed Sacrament of the Altar. This stumbling block comes at a time when surveys suggest that many Catholics do not realize, “The most august sacrament is the Most Holy Eucharist in which Christ the Lord Himself is contained, offered and received and by which the Church continually lives and grows…” (Canon 897).

Disbelief can be reinforced and deepened when Catholic politicians who publicly support the grave sins of abortion, human embryonic stem cell research and euthanasia are allowed to receive Holy Communion, despite their formal cooperation in the slaughter of millions of innocents.

As then-Cardinal Joseph Ratzinger said in his 2004 memo to bishops in the United States, “formal cooperation becomes manifest— understood, in the case of a Catholic politician, as his consistently campaigning and voting for permissive abortion and euthanasia laws.”

Indeed, when the faithful witness manifest grave sinners receiving Holy Communion, some are tempted to question both the gravity of the abortion abomination and the Real Presence of Our Lord in the Eucharist. Consequently, they may even fall into thinking, “If these politicians don’t have to listen to Church teaching and can still receive Holy Communion, why can’t I?”

As the preeminent scholar of Canon Law, Archbishop Raymond Burke of Saint Louis, explained, “No matter how often a bishop or priest repeats the teaching of the Church regarding procured abortion, if he stands by and does nothing to discipline a Catholic who publicly supports legislation permitting the gravest of injustices and, at the same time, presents himself to receive Holy Communion, then his teaching rings hollow. To remain silent is to permit serious confusion regarding a fundamental truth of the moral law.”

This good shepherd also noted that in addition to maintaining respect for the holiness of the Blessed Sacrament and avoiding scandal, the discipline of denying Holy Communion is the exercise of a moral duty on the part of the minister “to safeguard the salvation of the soul of the party presenting himself to receive Holy Communion.”

In light of the present struggles which pit the Gospel against the anti-Gospel, life versus death, hope versus despair, this time may be a providential moment of singular opportunity to make clear tothe hearts and minds of believers the true meaning and awesome reality of the Holy Sacrifice of the Mass and the fruit we receive from it in Holy Communion.

Yet it is a disgrace that many entrusted with custody of the mysterium fidei would permit people so obviously tied up with the demonic and systematic destruction of the unborn to receive the Bread of Life. This scandalous situation is grievous and greatly offensive to Catholics who have any measure of piety. Yes, we pray for the lost souls who enable the heinous crime of abortion. But I also pray that one day those who are uncomfortable enforcing Church law will also understand the confusion they have caused by their egregious failure to act and rally the other ministers of Holy Communion to defend the Holy of Holies from sacrilege.

To those who are concerned about the possible ramifications of enforcing Canon 915, we can hope that the dark clouds over our beloved land may be lifted by doing the right thing at this moment. We can hope that all eyes will recognize the deception which has brought us as a nation to sacrifice our own children. Let us not discount the great things God may work when we stand united in faith, truth and Church law.

Indeed, those chosen by the Almighty as overseers can help to guide us out of the valley of death by insuring that the fog of confusion does not envelop the faithful and keep them from recognizing the path of life, which is clearly marked out in black and white. Canon 915 is Church law written in view of a true understanding of the awesome reality of the Holy Eucharist. After all, there is nothing more holy or sacred in this world.

The significance of the millstone surrounding the Canon 915 medallion is not lost to those visiting the memorial as it immediately invokes our Lord’s warning words, “But he that shall scandalize one of these little ones that believe in Me, it were better for him that a millstone should be hanged about his neck, and that he should be drowned in the depth of the sea” (Matthew 18:6).

Now is the time. Who among us accepts the Lord’s invitation to conversion?

The Reverend Father William J Kuchinsky is a Priest of the Diocese of Wheeling-Charleston, West Virginia. He was ordained in 1997.