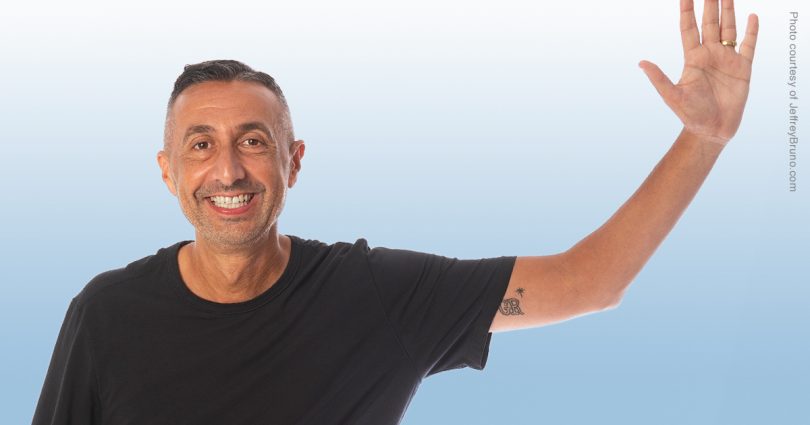 “Hellooo Catholics! And everyone else!” is the greeting that draws every listener in and brings a smile to their faces as The Catholic Guy Show on SiriusXM’s Catholic Channel begins.

These five words commence two hours of “pure Catholic pleasure,” as host Lino Rulli calls it. And often, they are the best and funniest two hours of the day.

When Lino Rulli first took the job with SiriusXM as The Catholic Guy, he had no idea the impact he would have, the amount of people who would return to Catholicism or strengthen their faith because of him, or the bonds of community he would create. But, since its inception in 2006, The Catholic Guy Show has done exactly that—and more.

Who is The Catholic Guy?

Lino Rulli, also known as The Catholic Guy, grew up in a small Catholic family in Minnesota. From a young age, he showed a passion for entertaining, even lettering in theatre in high school. After college, Lino earned his master’s in theology, then taught high school in the Bahamas before beginning his career in TV broadcasting. But in 2006, his life changed when he became The Catholic Guy.

Now, 15 years later, Lino and his team, which includes his producer Tyler Veghte and three-day-a-week cohost Mark Hart “The Bible Geek”—also chief information officer/executive vice president of Life Teen—entertain audiences with humor, faith, and a passion for all things Catholic.

Lino states: “My favorite part of the show has been realizing people count on the show to help get them through the day. . . . Getting to be there for listeners going through all kinds of hardships, but still giving them a laugh? That’s something that means an enormous amount to me.”

It means an enormous amount to the listeners as well. The Catholic Guy Show not only brightens their days and makes them laugh, but it leads people to a deeper relationship with Christ. It is a community of people who have come together in faith, who laugh together, who support each other, and who even share inside jokes (bears are fast).

This is something we desperately need in today’s world. As Catholics, we crave strong leaders who will guide us along the path to heaven, who will provide a greater understanding of the faith, and who will teach us to allow God’s word to shape the way we look at the world. If these fundamental aspects of building a culture of life are missing, we lack a solid foundation in our own faith.

With humor, love, and a fire for Catholicism, Lino and his team provide this foundation.

Throughout his two-hour show, Lino weaves lighthearted discussion with Catholic-themed games, education, and a healthy dose of humor. Lino’s skill with taking everyday occurrences and finding ways to integrate a discussion of Catholicism into them teaches the listener that faith is not something we should compartmentalize.

As Lino explains: “My vision was always to at least try to connect the dots. To tell a (hopefully entertaining) story and then find a way to connect it to the faith.”

For instance, in a discussion about animals eating his wife’s vegetable plants, Lino teaches about St. Francis of Assisi. A simple question about his favorite TV show theme song leads to a discussion of the pope and Church history. Poking fun at his lack of knowledge of American geography leads to a tie-in with geography in the Holy Land or in Rome. And a discussion of snacks leads to an explanation of the dangers of relativism.

Through his examples, listeners learn that faith should be a regular part of every moment. They learn to see God in everything. And they learn the beauty of Catholicism.

Over the years, the community of listeners has become so much more than just a group of passive listeners. Lino regularly involves them in activities both on and outside the show. He has held Catholic Guy Conventions, online conventions during the pandemic, a Lenten video program, and even hosted an online Vacation Bible School this summer.

In addition to that, he takes small groups of listeners on pilgrimages a few times a year. These trips—usually to Italy or the Holy Land—are transformative. I can personally attest to that, as I joined him on one such trip to Rome in March 2013.

And it’s obvious that Lino loves these pilgrimages as much as his listeners do. He states: “During that first trip, I realized it wasn’t about me. It was about the people on the pilgrimage. . . . So we did another trip, and another trip, and I realized that it meant something to people. To visit the churches through my eyes, to eat at my favorite restaurants, to make lifelong friends along the way. I’d never have guessed it would be part of my life. And it’s now become one of the most important parts of my life.”

The impact Lino has had on his listeners’ lives is evident in the show’s online Facebook community. Recently, someone posted a question asking if Lino’s show has brought anyone closer to God. Hundreds of people responded in the affirmative. Some of the comments included:

I wouldn’t be Catholic if it weren’t for Lino. I was going to leave the Church till I listened to the show. — Chuck

I’d been a fallen away Catholic, and when I found TCGS it helped me find my way back. Just by hearing Lino, Mark, and [Tyler] discussing the ins and outs of being Catholic brought me a sense of belonging. — John

Yes. We went on a pilgrimage with him, and it was the time of our lives. The trip with Lino stoked the fire in us for the Catholic faith. His passion for confession and our Mother Mary brought me back to the confessional. My faith is stronger and fuller than ever. — Barbara

I saw this fire for Catholicism firsthand on my pilgrimage trip. At the end of the week, one of the men stood up at dinner and told his wife—and the rest of us—that the trip, the other pilgrims, and all he had experienced over the course of the week had convinced him to convert. It was truly an amazing moment!

Not just for adults!

As parents, we regularly search for ways to keep our children engaged in religion, to teach them how to integrate faith into every aspect of their lives, to help stoke the fire for our faith, and to give them examples of real-life holy men and women.

The Catholic Guy Show is instrumental in helping build the faith of young people, as Lino makes learning about the faith exciting and fun. Young people are hungry for this in their lives!

This is evidenced by the fact that Lino has been a confirmation sponsor to young listeners nine times. The first was a young woman who wrote him out of the blue. Though Lino was a bit hesitant at first, he says the experience was rewarding and states: “When there are kids that are excited about confirmation, and want some radio host to be their sponsor and encourage them? I’m flattered to be a part of their lives.”

When a person loves his faith, that passion and that love permeate every aspect of his personality. This passion is evident throughout Lino’s show, in his understanding of Catholicism, and in his desire to help others grow in the faith.

As Lino explains: “The ability to reach so many people, lots of whom didn’t even know they’d want to listen to a Catholic radio show, that’s something I could never do in other forms of ministry or teaching.”

His is a special gift—one that has touched countless lives. Listeners feel blessed to be a part of his community, and they know that he feels the same way. Lino’s words reflect this fact: “I try to be grateful every day for every listener, every fan, and in some ways I dislike even describing them as ‘listeners’ or ‘fans,’ like they’re just there to serve my ego and my needs as a broadcaster. I want to be there for them in the very way they’ve been there for me. . . . So I do whatever is in my power to show that gratitude and prove I appreciate each person.”

Lino, who has written two books—Sinner and Saint—never hides his flaws or claims perfection. He understands that we are all sinners striving to become saints. And he teaches that we cannot accomplish this without a strong foundation in the faith, without the grace of God, and without God’s mercy in confession.

Every day, Lino is a brilliant example of how to live out Christ’s commission to the Apostles: “Go, therefore, and make disciples of all nations” (Matthew 28:19).

The Catholic Guy Show proves that it doesn’t take a perfect person to lead us to Christ. It just takes one who teaches the truths of the faith and who understands and shares the treasures he has found in Christ. The jokes help too.