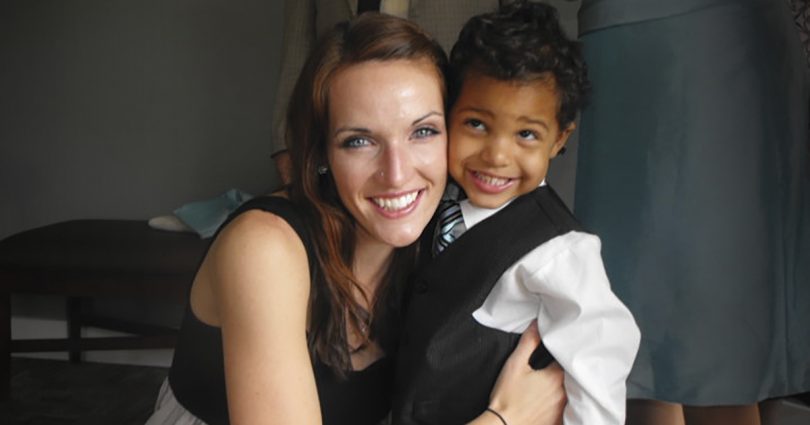 “Mom, I’m pregnant.” With this announcement, my 20-year-old daughter, a junior at a Christian college, rocked my world and changed it forever. My daughter continued, “I’ve made one mistake and I don’t want to make more. I’m not going to marry the baby’s father—at least not now, and I’m not going to abort my child.”

The phone rang a little before midnight, waking me from a sound sleep. Kristin’s voice was calm as she gave me her news. She had spent most of the day contemplating her situation before she called me. She had resolved some questions. She knew that carrying her child to term would mean confessing the situation to the authorities at her Christian college and facing whatever consequences that confession might bring.

Kristin also knew that this life growing inside of her would alter hers forever. She might become a topic for the gossip grapevine and would almost certainly have to give up her starting position on the college’s volleyball team. Even so, she had decided that abortion was out of the question. Although I supported my daughter’s pro-life position, I needed some emotional support. I told her I needed to share the news with her father and we would call her right back.

My husband was working late in his home office. I broke our daughter’s news to him; then we called her back—each of us on a different extension. My husband’s response was wonderful. He told her that he loved her and was proud of her for choosing life. But after he hung up, we both cried.

Kristin was sick right away—plagued with chronic nausea almost from the start. The school handled the news well. The dean of students told her that the school was not pro-premarital sex, but it was pro-life—and being pro-life necessitated helping single moms, since they are the women who most often seek abortions. The school offered her an option for staying in school that included counseling and a change in housing.

At the eighth week of pregnancy, my daughter had her first sonogram. She called and told me all about it, with great excitement in her voice. She didn’t know if her baby was a boy or a girl yet, but he or she had a head, body, arms, legs, fingers, and toes! My daughter overflowed with joy as she told me how her baby had wiggled around on the screen in front of her, moving tiny arms and legs.

Then she said, “And Mom, when I got back to my dorm room after the sonogram, I had an e-mail waiting for me … from a friend telling me it wasn’t too late to take the abortion pill. I still had one more week left before it would be too late!” Mifepristone (formerly known as RU-486) can be taken as late as nine weeks after the first day of a woman’s last menstrual period—in other words, until she is seven weeks pregnant.

Kristin continued, “Mom! My friend was telling me that I could take a pill and make my ‘problem’ go away. But it’s not a ‘problem’—it’s a baby! I’ve seen him! He has arms and legs, and even though I can’t feel him yet, he’s moving all around inside of me!”

Once again, I was awakened from a sound sleep by my daughter. This time, it was at four in the morning. She stood over me, shaking me gently by the shoulders and saying, “Mom! Mom! Wake up! I think my water just broke.”

Kristin had moved back home after the fall semester ended and was living with us while attending night classes at a local college. Her baby was not due for another six weeks. I was surprised, as well as concerned, at the news that her water had broken so early. Just as the sun began to peek over the horizon, the two of us quickly made our way to the hospital.
Unfortunately, her labor and delivery weren’t without incident. There were late decelerations in my grandbaby’s heart rate—a potentially dangerous and even life-threatening condition. The doctor told the nurse, “If this baby’s heart doesn’t come back up in 30 seconds, we’re getting him out in three minutes.” Then he yelled, “THREE MINUTES!!” and the hospital staff flew into action. The baby’s heart rate soon returned to the normal range, but the doctor recommended proceeding with the C-section

I was allowed to stay in the operating room with Kristin and sat on a stool near her head. A drape separated her head and abdomen so that neither of us could see the surgery. After a while, the doctor told me I could peer over the drape and see my grandson.

As a nurse, I had seen a handful of normal deliveries and C-sections, but I had never seen this before. The doctor held my grandson in a sitting position on my daughter’s tummy—all five pounds and nine ounces of him—and he still had the amniotic sac around him! He looked like he had a stocking over his head, only this stocking looked more like a clear plastic bag. And behind that bag were his two big brown eyes. They were wide open and looking right at me! He was one of the most beautiful little creatures I’ve ever seen!

Though six weeks premature, little Grason seemed healthy. But unfortunately, within hours, it became apparent that he wasn’t. He was septic. Three days later, my daughter became septic too. She was receiving triple antibiotics intravenously, and he was receiving double antibiotics in his IV. By God’s grace, both lived and made full recoveries.

At her six-week postpartum checkup, Kristin’s doctor greeted her by exclaiming, “Well, I’m glad to see you up and about! I thought I was going to lose you there for a minute.” When she asked him if he was joking, his answer was carefully worded: “Well, we don’t lose moms very often these days, but when we do, it’s from what you had.”

Sometime around Christmas of the following year, Kristin told me about a discussion she had with a friend of hers about late-term abortion. My daughter told her friend that her baby had been born at 34 weeks—a gestational stage at which some babies are still aborted (since abortion is permitted until birth). Grason had nearly died at birth, and both he and she had nearly died after his birth. He had spent the first two weeks of his life in the neonatal intensive care unit, which had cost her a fortune. She added, “Don’t talk to me about late-term abortions! When others are killing their babies, I did everything I could to save mine! My baby was treasured. His life was valued—and I went to great personal sacrifice, pain, and expense to keep him alive!”

I agree with my daughter. Don’t talk to me about abortions either! I know the value of life, even when a baby’s arrival isn’t planned. I’ve experienced this firsthand. My little unplanned, out-of-wedlock grandson is one of the greatest blessings God has ever given to me. This child has my heart wrapped around his little finger, and I can’t imagine my life without him!

Neither can my husband; he adores his grandson! He carries the little guy around on his shoulders. They’re buddies. As I see Grason’s dimpled smile lighting up the world around him, I remember the tears my husband and I shed when we first learned that our daughter was pregnant.

My daughter gave up dormitory life, volleyball, and her independence. She moved back home, took a part-time job, and continued in school—while also learning how to be a mother. I couldn’t be prouder of her courageous fight to give her child life!

Surely, God’s word is true: Those who sow in tears do reap with cries of joy!

Harriet Michael writes from Louisville, Kentucky. Married for 32 years, she and her husband, John, have four children and one grandchild. Her work has also appeared in ParentLife, The Lookout and Mature Living magazines; in the anthology titled Love Is a Flame; and in several devotional magazines, including The Upper Room and The Secret Place. She blogs at WhatHeHasDoneforMySoul.blogspot.com.