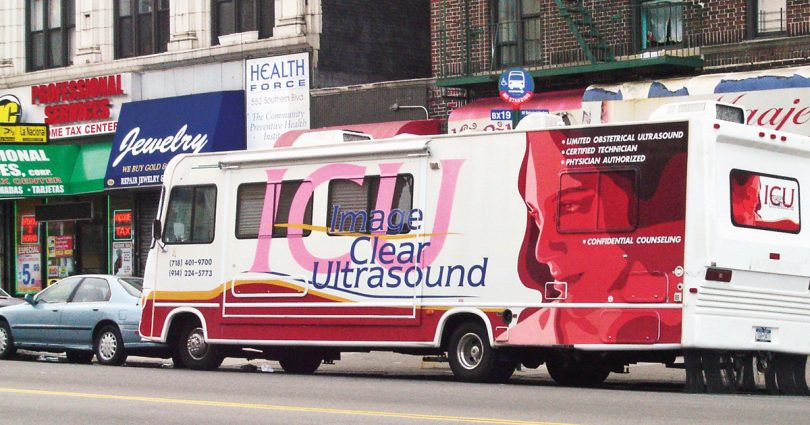 New York’s City’s huge and powerful abortion industry is now taking direct aim at some of the nation’s most effective and courageous sidewalk counseling efforts. Chris Slattery, founder and president of Expectant Mother Care-EMC FrontLine Pregnancy Centers in New York City, and his faithful counseling team are sure to feel the effects of New York City’s so-called clinic access law. The legislation, sponsored by pro-abortion City Council Speaker Christine Quinn, predictably drew overwhelming support from abortion proponents and was signed by Mayor Michael Bloomberg on April 20. The new law is highly restrictive and creates a tremendous burden for sidewalk counselors by directly targeting their ability to reach out to women during the critical moments before they enter an abortion business. It is a form of intimidation designed to suppress the pro-life work that saves the lives of countless preborn babies and spares their mothers from victimization.

Quinn announced the bill at a news conference last September 24. She was joined by representatives of such groups as the New York Civil Liberties Union, Planned Parenthood and NARAL Pro-Choice New York, who proudly supported it.

According to the media release, “The Clinic Access Bill will make it illegal to follow and harass any individual or place that individual in fear of physical harm within a fifteen-foot area around a reproductive health care facility.” The law further targets pro-life volunteers outside abortion businesses by removing the need to prove that any such harassment has taken place. Thus, abortion business customers and staff members have been given carte blanche to file bogus complaints against pro-lifers.

“This law is a direct assault on the freedoms of speech and assembly,” Slattery explained. “With a pro-abortion mayor and an overwhelmingly pro-abortion city council in New York, we are not surprised, but are still alarmed by this attempt to railroad the lawful and peaceful sidewalk counseling offered at abortion centers.”

Slattery believes it was no coincidence that the announcement came on the opening day of the fall 40 Days for Life campaign, which included pro-life vigils at multiple abortion facilities in the Bronx and Queens boroughs. “I am very thankful for the explosion of the 40 Days for Life campaigns nationwide because of their emphasis on sidewalk counseling,” said Slattery. “That is why this bill [was] being pushed.”

This “clinic access” law, which will take effect 90 days after the mayor signed the bill, differs from other laws because it relies upon police officers’ individual judgment. Current law in New York City requires prosecutors to prove that a defendant intended to prevent someone from obtaining or assisting in obtaining services from an abortion business. Under the new law, proof of such intent is not necessary for a complaint to be filed.

Furthermore, when the new law takes effect, abortion businesses will be allowed to file harassment complaints. Current law only allows an individual’s complaints about supposed harassment against themselves to be prosecuted. Slattery explained, “This [new] law is extremely dangerous because of its vagueness. It is truly a spider’s web that leaves us at the mercy of the police and their interpretation the law. So much is reliant upon individual judgment.”

“This [new] law provides vivid evidence that the pro-abortion lobby and its paid political allies in New York’s city government are the true ‘anti-choice zealots,’” observed Tom Brejcha, president and chief counsel of the Chicago-based Thomas More Society, a public-interest pro-life law center. “It is fraught with ambiguities and remarkably overreaching. Any jurist with a fair understanding of the First Amendment should strike it down as unconstitutional on its face.”

According to Slattery, not one article was written about the signing of this controversial bill on April 20. “Sadly, New York does not put the rights of pro-life advo cates at the top of the list to protect,” said Slattery. “Abortion clinics and their staffs are being empowered to impede the work of sidewalk counselors.”

While other states, such as Massachusetts and Colorado, have specific “buffer-zone” laws that can create a fixed “no-passing” area around clinics, the New York City law presents a new twist in the abortion industry’s attack on pro-lifers’ free speech rights. Almost as if to taunt sidewalk counselors into violating the law, the bill preserves their right to approach the clinic, but comes down hard if any perceived following or harassment takes place.

EMC FrontLine opened its first pregnancy resource center in 1985 and now operates 10 centers in the greater New York City area. It is known for its innovative lifesaving techniques, particularly its mobile ultrasound clinic, which it can park right outside an abortion facility.

“We know that when women and men hear the truth about abortion, it hurts the clinic’s business,” said Slattery. “Sidewalk counselors outside of these abortion facilities regularly dissuade abortion patients from going through with their decision to end the precious life they are carrying by peacefully offering help and prayers. Most importantly, the counselors offer the truth about abortion. The proabortion lobby will do all they can to prevent our efforts, and in turn, further exploit distraught women.”

Slattery said that, on average, EMC FrontLine counselors see approximately 12 turnarounds of abortion-minded women every week. With abortions costing up to $2,300 each, the clinics are losing quite a bit of money. “The bottom line is that we are cutting in on the abortion business,” said Slattery. “The abortion industry is about making lots of money. So now they are pressuring city government to pass far-reaching, vicious laws like this, to ensure that their pockets are continually padded.”

Slattery said that his organization is already exploring the legality of the new law with the help of attorney Christopher Ferrara, founder, president and chief counsel of the American Catholic Lawyers Association. They hope to meet with the police department to determine how it plans to enforce the law

“The abortion advocates are going to put pressure on the police to strictly enforce this bogus law,” said Slattery. “Our team has beenconsistently reaching out to men and women at two abortion clinics in Brooklyn and the South Bronx for a total of five days a week since February 2007. Not one arrest has been made on our people during that time. We would all be best served if the police were free to focus on the real harassment and crime that takes place in this city every day, not our peaceful efforts.”

While they are disappointed by the passage of the clinic access bill, Slattery and his team have not lost hope. EMC FrontLine intends to adopt the behaviors necessary for continuing to work within the law. “We will do what we always do. We will be there to talk with women, provide sonograms with our mobile clinic, offer information and provide help,” Slattery declared. “If we come to a point where we cannot continue the sidewalk counseling efforts because of the constraints of this law, we will move forward with legal action. Regardless of what happens, we must always be prudent in our opposition and work inside the law to save mothers and babies.”

Brejcha added that his organization is eager to help, if needed. “This new law is a great challenge, but the pro-life movement is capable of mounting a counterattack to meet this challenge,” said Brejcha. “The Thomas More Society stands ready, willing and able to do whatever it takes to support the peaceful sidewalk counselors and prayer warriors of New York City.”

As for now, EMC FrontLine will continue its lifesaving work on the streets of New York City. “We realize that this is big, but we also realize that God is bigger,” said Slattery. “If He can work around the laws, so can we.”

For more information on Expectant Mother Care-EMCFrontLine Pregnancy Centers, (an ALL Associate group), see “Lifesavers in the nation’s abortion capital” in our November-December 2007 issue, visit emcfrontline.org, or call 718-884-9210 or 914-224-5773.