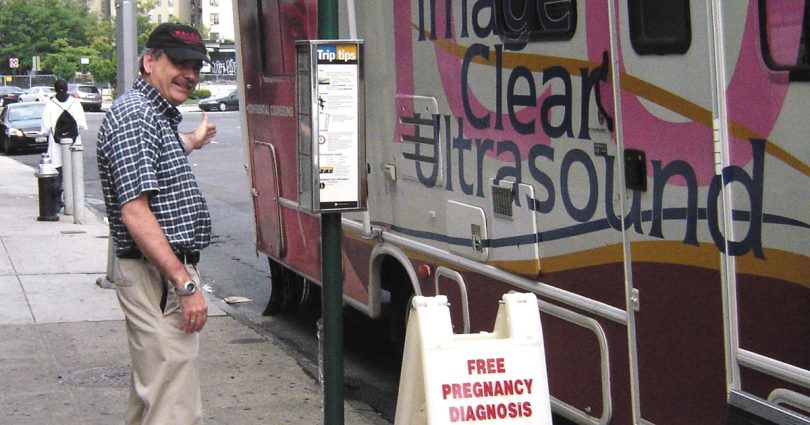 New York City deserves the title “Abortion Capital of America.” Ten percent of all abortions performed in the United States take place in its metro area, abortion training is mandatory for its OB/GYN medical students and it has a whopping 100 abortion facilities. Add to that its long history of pro-abortion politicians and New York City’s abortion legacy is second to none.

Despite New York’s culture of death and its oppressive network, Chris Slattery and Expectant Mother Care-EMC FrontLine Pregnancy Centers have been saving lives with innovations for more than two decades. EMC FrontLine’s new mobile ultrasound clinic is the flagship of the new techniques.

Chris and his team arrive outside an abortion facility at about 7:15 in the morning, 15 minutes before it opens. Their first hurdle is to secure a legal parking space for the gargantuan pink recreational vehicle—a space close enough to be effective. As if parking in New York City isn’t difficult in itself, the abortion facility’s manager will often arrange for extra cars to park in front of her business to block Chris. Then if she spots his pro-life RV while double-parked, she calls the police to report it.

“We play little games here each day,” said Chris, while waiting for one or more of the parked cars to pull away. Chris refers to these lastsecond departures as “miracles.”

The mobile clinic is aptly referred to as a “sidewalk safe haven.” Inside, the RV provides a quiet, comfortable place for sidewalk counselors and pregnant women to discuss their fears and positive solutions. Though cars are passing just a few feet from where they sit, the sound is muted enough to ignore the noise. Climate control also provides a sanctuary from the extremes of the weather. Inside, EMC’s counseling staff also uses a crystal display TV and a DVD player to show American Life League’s Baby Steps DVD, with 4-D ultrasound images of the baby’s development in the womb. The mobile clinic also is furnished with comfortable chairs, a couch, a kitchen table and, of course, the ultrasound equipment and facilities.

Ultrasounds are performed by certified technician Wadiya Penzellna, under the supervision of an off-site physician. Monitors are available for the mother to view her baby and the entire ultrasound suite can be closed off from the rest of the RV for privacy. In its first six months of operation, EMC FrontLine’s staff has given 145 complimentary ultrasounds in Mobile Clinic 1.

“It certainly has improved our lifesaving rate,” said Chris. He and his staff are more likely to get contact information from the women who are counseled in the RV than those on the sidewalk. That translates into better follow-up, such as visiting the women in the hospital when they give birth and continuing support after they have chosen life.

Most of the time, that contact information is critical in the days following an initial counseling. “For women on the fence, pressure is still intense,” explained Chris. “So we obtain multiple phone numbers and e-mail addresses. We communicate with the women as they prefer. Counselors often send text messages as follow-ups and sometimes we have texted women out of an abortion mill from the mobile clinic while praying on our knees for a conversion!”

In addition to providing a private counseling office right outside an abortion business, the mobile clinic serves as a temporary headquarters for the lifesaving staff. The sidewalk counseling team is able to get cold water or, in emergencies, use the RV’s restroom.

“The three mobile units will be used for headquarters, training, overnight respite, ultrasounds, bath rooms and counseling,” said Chris, explaining that EMC FrontLine is making the most of its resources.

“We’ve tested about half a dozen abortion providers in the Bronx,” he said. “We chose Dr. Emily’s because the wide sidewalks, long approach from the corner and heavy traffic made the best opportunity for good human interaction.”

Chris concentrates on Dr. Emily’s because it is owned by Dr. William Knorr, a lead plaintiff, abortionist and partial-birth abortion expert who testified against the ban at the U.S. Supreme Court. EMC FrontLine has an office clinic positioned near Dr. Emily’s other location in Brooklyn—right in the same building that Dr. Emily’s shares with Planned Parenthood.

Other targeted areas for the mobile clinic include an “abortion row” of six killing centers along Roosevelt Avenue in the Corona/ Jackson Heights section of Queens. Another six killing centers make up an abortion area of Flushing, Queens. Both of these abortionist-infested areas are primarily for non-English speaking women.

EMC FrontLine’s effectiveness is enhanced by another innovation: a program for interns to assist in the sidewalk counseling and other activities.

“They add a tremendous prolife workforce, a ‘life force’ if you will,” Chris said. “They’re my ATeam,” he chuckled, “the ‘A’ stands for ‘abortion.’” Over the past summer, EMC FrontLine had 15 full-time interns and Chris is looking for volunteers to help out year-round.

Julie Beyel, one of EMC FrontLine’s full-time staff counselors, interned with Chris for two years prior to becoming a full-time employee. Instead of counseling solo, the intern program allows her to lead by example—training college students and recent graduates how to approach pregnant mothers and save lives.

“We are always hoping for that perfect moment of sidewalk counseling: God’s grace giving one the right thing to say at the right time,” said Chris.

As we watched, a couple approached the abortion facility and was greeted by Julie. She spoke very briefly to them. Suddenly the man turned, his face became wrought with grief and he began sobbing. “I can’t do it!” he exclaimed. After some discussion between them, the couple walked away.

For decades, a strong political movement has supported abortion businesses in New York City. While Planned Parenthood is the country’s largest abortion provider, it has only three business locations there and all of them have to face an EMC FrontLine Pregnancy Center nearby. In the South Bronx, EMC FrontLine is across the street. In Brooklyn, EMC FrontLine is in the same building.

However, not all abortion providers in New York City can be reached so easily. The largest abortion provider, ParkMed in Manhattan, is actually located in a building owned by the Israeli Consulate. That makes sidewalk counseling almost impossible, due to round-the-clock police protection and strict no-parking and noloitering zones.

Record numbers of abortions are not New York City’s only claim to abortion fame. In 2002, Mayor Mike Bloomberg required that abortion training be mandatory for OB/GYN residents in the city’s hospitals. Those residency programs train one in seven U.S. doctors. Though they can opt out for personal or religious reasons, only about 25 percent of the 150 residents do so annually.

“We’re training the largest abortion force in America here in New York and then we export them to the rest of the country,” said Chris.

Since its first pregnancy center opened in 1985, EMC FrontLine has been entirely focused on saving babies. There are only 10 fulltime staff members and no administrative or managerial employees. “I make sure everyone is engaged 100 percent in effective lifesaving,” said Chris. “Everyone does each other’s jobs and we all do everything that we have to do.”

In particular, everyone is involved in counseling women considering abortion. “We counsel approximately 50 women a day,” said Chris. “That is, meaningful conversations with 50 women who are considering abortion, in our clinics and in front of the mills. We see roughly 15-20 turnarounds of abortion-minded women each day.”

EMC FrontLine now operates over a dozen pregnancy centers and has locations in four of the five New York City boroughs and two suburban locations, in White Plains and Jersey City. To date, they have counseled close to 80,000 women and saved approximately 18,000 children from abortion.

Come what may, Chris Slattery is resolved to save lives in the nation’s abortion capital, using whatever resources he can—RVs, ultrasounds, DVDs and cell phones. “And,” Chris stressed, “of course, prayer!”

Shortly after Chris Slattery founded Expectant Mother Care-EMC FrontLine Pregnancy Centers, pro-abortion organizations and abortion providers had charges brought against him for advertising in the “Clinics” section of the yellow pages—and it was a lesson well learned.

In 2006, Chris and EMC FrontLine filed a lawsuit against Dr. Emily’s abortion centers, located in Brooklyn and the Bronx. The abortion business had fraudulently advertised in the “Abortion Alternatives” section of Ambassador Yellow Pages.

Surprisingly, the case rapidly went to New York’s Supreme Court, where the abortion practitioners surrendered. Justice Bruce Tolbert signed the court order stating that “[Dr. Emily’s] and its subsidiaries, corporate affiliates, or successors in interest engaged in the performance of or referral for abortions, shall immediately and permanently refrain from advertising in the ‘abortion alternatives’ section of Ambassador Yellow Pages, Yellow Book, and any other publisher or telephone advertising directories commonly known and understood as or similar to ‘Yellow Pages,’ as well as in any ‘Abortion Alternatives’ section of any online advertising.”

Galen Sherwin, a staff attorney with the New York Civil Liberties Union, didn’t take the pro-life victory well. She told the Journal News, “We felt it was a nuisance lawsuit, it was a baseless lawsuit. We could have fought it in court.” Nice try.

In any case, Chris Slattery will continue being a righteous nuisance to abortionists.