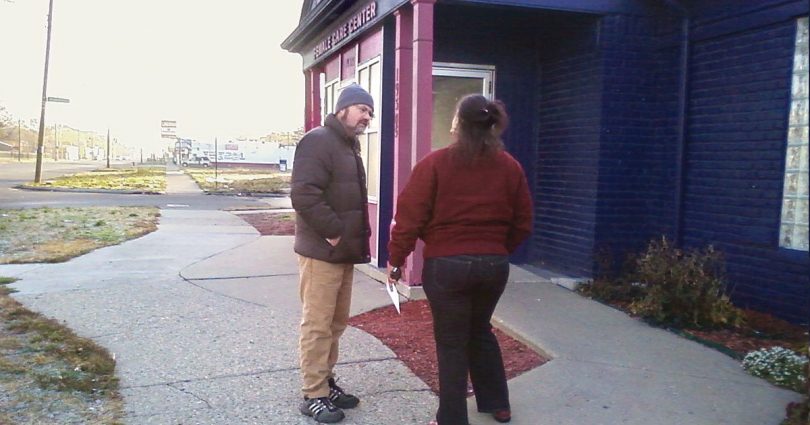 Almost from the very beginning, the problem facing history and humanity has been fragmentation. Immediately after disobeying God’s command, Adam and Eve’s relationship fragmented under the blow of blame and guilt. That fragmentation then spread to their offspring, as brother murdered brother. Ultimately, we find the whole human community suffering from the inability to connect, to relate, to understand each other. Man’s efforts to communicate with others became mere babel. The ultimate answer to this babel is, of course, in Pentecost—that is, in the communion of the Church, our relatedness in the Body of Christ. For those who step out of this community, however, there can be only isolation.

I don’t think sinful man’s isolation can be seen any more clearly than at the abortion mill. One of the clearest reflections of the community of the Triune Godhead, we know, is the Trinitarian community of the family. That community, however, is badly wounded, perhaps destroyed, at the abortuary. When the man puts the woman in the car to take her there, he tells her he didn’t really intend the message of self-gift he spoke at the moment of physical intimacy. He says he wants the incarnation of their union—the child—to be torn apart. The woman says she doesn’t trust the man. She says there’s no such thing as sacrifice, no such thing as love, no such thing as communion. For the woman, elective abortion is total despair.

However, even at that moment of despair, even at the very door of the abortuary, miraculous moments have occurred—moments in which a mother recognizes the reality of another soul and her connection to that soul, moments in which a man recognizes his responsibility to the woman he has brought to that dark place. These moments are often witnessed and, in some ways, facilitated by the pro-life movement’s frontline activists: sidewalk counselors. The methods used by sidewalk counselors to help bring about these moments vary from region to region, and even from facility to facility. Nevertheless, there are a few universals that, I believe, all sidewalk counselors can and should observe. Following are the general guidelines* employed by the Guadalupe Partners (see sidebar) who sidewalk counsel in the Detroit metropolitan area.

When I present sidewalk counseling workshops (see sidebar), usually I’m asked, “What do you say to a woman who’s going in for an abortion?” Unfortunately, there’s no script for sidewalk counseling. The sidewalk counselor, like Saint Paul, has to be “all things to all people.” He must be able to adapt himself to where he is and to whom he is speaking.

With that theme in mind, one must first realize this person isn’t always a woman. The woman, certainly, is the one who will suffer the abortion, but sometimes it’s her boyfriend or dad who is really going for the abortion. When the sidewalk counselor sees the potential customers getting out of their cars, he has to make an immediate assessment: Who really wants the abortion, and what kind of person is he?

A Spanish-speaking couple or woman will probably be more open to appeals of faith. A father taking in a daughter needs to be reminded that the trouble she’s experiencing can’t be erased by a five-minute procedure and that the abortion itself will inflict her with years of guilt. A boyfriend or husband must be told that if he loves his woman, he won’t want to destroy what she—what they —have created. One will remind him, too, that abortion is usually the death sentence of a love relationship. An older woman who already has several children can be asked why this one is any less valuable: Doesn’t she love them all equally? Finally, one might ask a teenage girl if she had always dreamed of beginning her womanhood in an abortion mill.

Years ago, one of my high school students and I pulled up to a Chicago abortuary where pro-life rescuers had blocked the doors. The police had created a corridor to one of the doors, and that corridor was lined with pro-lifers, many of them holding signs. As my student and I approached the scene, an abortuary “escort,” mistaking us for a couple, approached to ask if we wanted to be escorted into the facility. We both looked at each other and then said, “Yes.” Once inside, we argued loudly about Ashlea’s feigned decision to abort. After 10 minutes of brilliant improvisation, I was kicked out.

What’s most important to recount, though, is what we experienced while walking through that corridor of pro-lifers. It was like walking through a factory, a barrage of noise, none of which made sense. When someone entering an abortuary feels—rightly or wrongly—that she’s being attacked, she creates a mental wall that blocks any message others try to convey. Any kind of shouting, then, no matter how worthy the message, is self-defeating. Large signs or even bulky packets of material can have the same effect.

Bodily positioning on the sidewalk is also very important for sidewalk counselors. They shouldn’t group together; instead, as an expression of their own weakness, they should approach the woman or couple singly. To a certain extent, sidewalk counselors must abandon fears for their own safety. They shouldn’t speak to anyone from a “safe distance,” but calmly walk right up to the man or woman. This guarantees that the counselor’s voice will be as non-threatening as possible. Not long ago, a woman inside of a Dearborn, Michigan, abortion facility came out to smoke a cigarette. As she stood just outside the front door, a ring of pro-lifers stood about eight feet from her, talking at her, but not really talking to her. Sidewalk counselor Alicia Wong (a Guadalupe Partners member) approached, stepped right through the ring to the woman’s side, and began a quiet conversation.

Perhaps the most important “don’t do” rule is that you should never talk over another sidewalk counselor. I know how tempting it is. You’re convinced that what you have to say is directly from the Holy Spirit, sent by Angelic Express. You’re full of fire, so you call it out, right over another sidewalk counselor’s active conversation. At that moment, the woman or boyfriend takes advantage of the slight interruption and says, “I have to go back in now.”

A person being spoken at has an easier time of breaking away than a person who has been engaged in a true conversation. So, in order to engage a woman or couple entering a facility, a sidewalk counselor needs to ask questions: Is this your first child? How many children do you have? Are you married? What brought you here? What do you think abortion will do for you? Do you know anything about the long-term effects of abortion? How can we help you? The answers to these questions will point the way for you to follow in the conversation. The advantage is that what you say won’t be a generic script; instead, your words will speak directly to an abortion-minded person.

A foretaste of heaven

Finally, a sidewalk counselor should understand that when real, human contact is made with a mother or couple, and she or they have rejected the temptation to kill the child, often that moment is the beginning—not the end—of the story. Invite the mother out to breakfast. Take her grocery shopping. Ask if you can visit her home and meet her other children. In other words, try to keep the relationship going.

After all, this is what the work is about: It’s about the life of the child, yes; about the health of the mother, yes; but mostly, it’s about relationship, the truth that no one lives in isolation. The community we share and experience on earth is a foretaste and preparation for the final, perfect community of heaven.

When I and other Guadalupe Partners began making trips into Detroit to visit mothers or families, we felt intimidated by the city’s harsh reputation. We entered, it seemed, a strange and threatening land. Now, though, that city holds many friends for us. Often, when rescuing a baby from the suction machine, we find that we have, in a way, rescued the whole family.

This seemed poignantly clear not long ago, when we buried a baby miscarried by a mother originally turned away from an abortion center. Despite his mother’s change of heart, he had died. But now she had gathered a few friends to say goodbye and to bury her child. Even the woman who had fronted the money for the baby to be killed was there by his casket, acknowledging that he was, after all, a member of the human family. This child died loved, not rejected. And a broken family is a little less broken.

The Guadalupe Partners began its sidewalk counseling ministry in the Ann Arbor, Michigan, area over 10 years ago (see Celebrate Life, November-December 2008 and “At the heart of the sidewalk,” January-February 2009). Its cofounders selected an abortion facility where they could have direct contact with the mothers entering for appointments. When that facility closed after a year and a half, they moved their outreach to an abortion business frequented by women from Detroit’s Mexicantown. There, cofounder Alicia Wong, born and raised in Mexico City, used her native Spanish with great success.Now that this facility, American Family Planning, is also closed, Guadalupe Partners has focused its efforts on two abortuaries located on Detroit’s west side.

This sidewalk counseling organization is unique in that its members personally provide all follow-up with the mothers who turn away from the abortion mills—including rent and utility bill assistance, along with frequent grocery, clothing, and diaper deliveries. An online audio seminar on the Guadalupe Partners’ sidewalk counseling techniques is available, free of charge, at GuadalupePartners.org.

* These guidelines apply only where direct contact with the mothers is possible. Injunctions, property lines, aggressive abortion facility escorts, and so forth, may make these methods impossible.

Edmund Miller teaches at Spiritus Sanctus Academy in Ann Arbor, Michigan, and has been sidewalk counseling since 1987. For more information about the Guadalupe Partners, please visit GuadalupePartners.org.