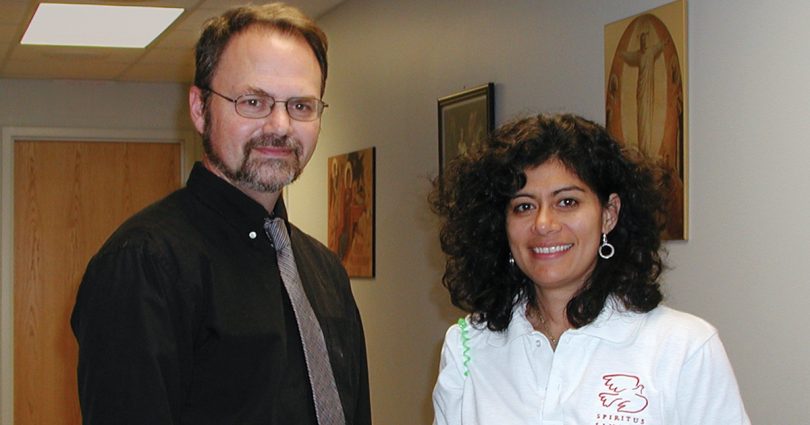 It began with a handshake.

In 2004, Alicia Wong, a mother of two students at Spiritus Sanctus Academy (an Ann Arbor, Michigan Catholic school operated by the Dominican Sisters of Mary, Mother of the Eucharist), had twice accompanied my eighth-grade class and me on the four or five prayer visits we made that year to the local abortion facility.

She originally did not mean to get involved in any way other than prayer. However, during one vigil outside the facility, I found myself in a counseling situation with a Spanish-speaking couple, but I could speak not a word of Spanish.

At that moment, Alicia—born and raised in Mexico City—stepped in. Continuing the conversation in Spanish, she convinced the couple to leave. A few weeks later, when the school year ended, Alicia and I shook hands in front of the school chapel, agreeing to continue providing, over the summer, a weekly pro-life presence at the Woman’s Choice abortion business in Ann Arbor. We ended up sidewalk counseling there once or twice a week for almost two years. The abortionist, meanwhile, lost so many clients that he was unable to pay his rent, and the happy day came when he was evicted.1 He later tried to reopen in downtown Ypsilanti, but pro-life pressure finally closed him down in Ypsilanti for good.

The line of resistance

Alicia and I immediately looked around the Detroit metropolitan area to find another abortion facility where, as at Woman’s Choice, personal contact with the mother would be possible. In nearby Dearborn, we found such a situation at American Family Planning, a freestanding facility. We began sidewalk counseling there weekly in January 2006.

Our first morning there was, for both of us, a shock. Appointments at Woman’s Choice had been scattered over several hours, but at American Family Planning, all appointments were taken at 8 AM. When we approached the mill that first time, we found a line already formed at the front door, whereas our previous experience had been in quiet one-on-one situations. We could have stood back and just “preached” to the whole assembly; instinctively, though, we stuck with the approach we had always used: I focused on one of the boyfriends, while Alicia spoke to a mother. Then it was 8 AM; the door was unlocked and they all filed in.

For several weeks, no one responded to us, the Guadalupe Partners, as we were now calling ourselves, in honor of Our Lady of Guadalupe, patroness of the pro-life movement. Then—as if a dam had burst—women began listening; women began responding. In part, the change occurred in response to how Alicia and I had changed our approach.

At Woman’s Choice, informing women of the abortionist’s checkered legal history, including 23 months spent in federal prison, had proved very effective in changing minds. At American Family Planning, though, the abortionist’s lawsuits had little impact on the mothers. Most of these Detroitarea moms were in desperate financial situations: They could not pay rent or utilities; often they could not even afford diapers or groceries.

The Guadalupe Partners, accordingly, began offering help. And mothers accepted. At first, of course, we weren’t exactly sure where we would get the help we were offering. But God was quick to let us know that ours was not the only effort involved.

One morning, for example, about 20 minutes before the clinic opened, we found a woman standing on the sidewalk near the front door. We learned that she already had five children; her husband was unemployed, and their only family vehicle had recently been stolen. Two days earlier, a friend had given us a car. Though small for their needs, the car was offered and gratefully accepted.

Later that same summer, we met an older Hispanic woman at the abortuary’s door. Trusting our promises, she left the abortuary and put herself into the hands of the Guadalupe Partners. Her doctor later told her that she would not be able to continue her job at the meatpacking plant during the pregnancy. The Guadalupe Partners, then, would have to support her completely for at least the next six months.

It occurred to us that it would be easier to move Maria closer to us, in Detroit’s far western suburbs. In our area, mobile homes were sold very cheaply. When I mentioned this during lunch period in the Academy’s faculty lounge, another teacher later offered to cover the entire purchase. Soon Maria moved to South Lyon.

For the past two years, that’s the way it has always worked: The Partners always have just enough to cover immediate costs, even though those costs have been rising steadily. To date, we have brought immediate, tangible assistance into the homes of almost 130 mothers. Monthly, we give out more than $3,000 in rental assistance, including the operation of Guadalupe House, a home for single mothers and their children.

Meanwhile, we remain full-time teachers (Alicia was, this year, hired as a math and gym teacher at Spiritus Sanctus Academy). Five of us are consistently on the sidewalk, while an equal number assist with fundraising and development. While the most consistent support has come from the school, our web site, talks and sidewalk counseling workshops bring in additional support.

In our sidewalk counseling seminars, we are frequently asked about what we say to the women entering the abortion facility. We answer that there is no “all-purpose” statement. Every woman and every situation is different. The sidewalk counselor has to be alert, focused and able to read each mother as he encounters her. Is she defensive, scared, indifferent, abusive or abused?

Far more important than what the sidewalk counselor says is the atmosphere in which he says it. Abortion-minded mothers quickly build psychological barriers against any sights or sounds that might undermine their decision. In a situation in which direct personal contact with a mother must be made, signs or posters are potentially counterproductive: Once the woman sees them, her protective wall goes up. Preaching or calling out to her can have the same effect. Insofar as possible, the approach to the mother must be calm, quiet and personal.

Once a woman turns away from the abortuary, we meet with her as soon as possible. We listen to her story and determine her most pressing needs. A local pregnancy help center, Pregnancy Aid, cooperates with us in providing free ultrasounds for the mothers. Sometimes we are told that we should refer the woman to social service agencies, which are far better equipped and endowed than we are. We freely admit our comparative poverty; however, we know that the fundamental privation of each mother’s life is not material, but spiritual. In most cases, then, meeting the mother at the abortuary is just the beginning. The mothers find that the Guadalupe Partners are their most consistent friends, and as we become part of their lives, they come to us with critical life decisions. Recently one mother, scheduled for a Caesarean section, said she had been advised to “have her tubes tied” during the surgery. We explained the meaning of her fertility. Another mother had a hospitalized father in a semi-comatose state. We thought it was too early for removal of the ventilator, and the father is now recovering. A third mother, encouraged by the Partners, refused amniocentesis for her baby. Later this year, I will become the godfather of that baby’s older sister. Finally, much to my joy, the older daughters of one of our mothers were able to enroll in Spiritus Sanctus Academy this year. (Two more Dominicans on the way?)

For more information about the Guadalupe Partners, call 734-709-4096 or visit GuadalupePartners.org.

Edmund Miller teaches at Spiritus Sanctus Academy in Ann Arbor, Michigan, and has been sidewalk counseling since 1987. For more information about the Guadalupe Partners, please visit GuadalupePartners.org.