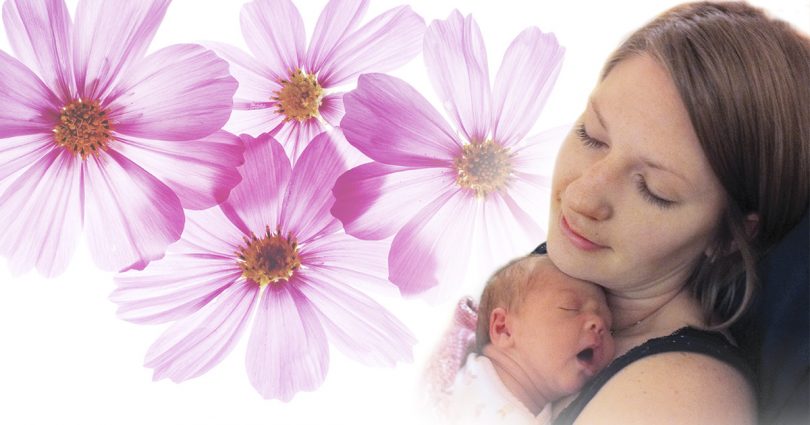 In July 2010, my grandniece Lindsay Jones and her husband, Justin, of Round Rock, Texas, were thrilled to learn they were expecting their first child, who was due on Jan. 30, 2011. But in mid-September, Lindsay, then 28 years old, was diagnosed as suffering from melanoma, a dangerous form of skin cancer that can spread rapidly. By the end of September, she had undergone two surgeries to remove cancerous lymph nodes.

Lindsay’s doctors were planning to deliver the baby by Caesarean section around January 9 and start Lindsay’s cancer treatment two weeks later. However, on December 24, Justin took her to the local hospital’s emergency room. She had been experiencing sharp pains in her back for several hours, and an ultrasound revealed a mass at the top of her uterus and another near her right kidney.

It was decided that Justin and Lindsay’s baby girl should be delivered then so that the two masses could be biopsied as soon as possible. Little Reese was born on Christmas Day, described by Lindsay as “the happiest day of my life” in her December 31 entry in her online journal (written to keep relatives and friends updated on her case). Reese was healthy but needed monitoring in the neonatal intensive care unit, due to her preterm birth.

After her C-section, Lindsay’s left ovary was removed and found to be cancerous. Despite the sad news that the melanoma was spreading, she was overjoyed by Reese’s arrival: “Children are such a blessing—people can tell you how awesome it is to be a parent, but you just can’t understand it until you’re holding your own baby in your arms” (January 3 journal entry). Subsequent scans revealed tumors in Lindsay’s adrenal gland, ribs, chest, abdomen and brain—and the need for even more aggressive treatment.

In late January, Lindsay underwent Gamma Knife surgery to treat the cancer in her brain and then started chemotherapy, and she and Justin welcomed baby Reese home from the hospital. But by early February, Lindsay was experiencing excruciating pain and severe vomiting, which landed her in an emergency room again.

Later that month, Lindsay, Justin and Lindsay’s mother, Nancy Broussard, flew to Los Angeles so that Lindsay could begin participating in a clinical trial conducted through the Angeles Clinic. While in Los Angeles, she was once again hospitalized for extreme pain but began taking a new medication as part of the trial, and doctors at Saint John’s Health Center in Santa Monica formulated an effective pain management strategy for her.

By March 7, Justin and Lindsay were back home with little Reese, and Lindsay’s hope was renewed when she discovered that a large tumor on her abdomen was shrinking. Reflecting on the previous several weeks, she wrote in her journal, “When I went into the emergency room at the beginning of February, my doctor told Justin and Mom that she didn’t know if I’d make it through the weekend. Thank God I did.”

Lindsay’s concern for her baby during pregnancy was evident in her first journal entry: “Tomorrow [Sept. 14, 2010], I’ll go see a perinatologist (high-risk baby doctor), so we can make sure that we’re doing everything we can to keep Reese safe.”

What Lindsay didn’t make explicit in her journal was that, during her pregnancy, when the cancer worsened, she was presented with two options: Start more aggressive treatment immediately (which might have harmed the baby), or delay treatment until after the baby’s birth. She instantly, calmly and resolutely responded, “Save the baby.”

But Lindsay was hesitant to give her approval for us, her relatives and friends, to describe her choice as we saw it: heroic. “I did what moms do,” she insisted. “Nothing more, nothing less.” One of her cousins made the following observation: “Heroes are like that; they always say their sacrifices are no big deal. The rest of us know otherwise, of course.”

Lindsay’s concern for others, even in the midst of great suffering, is evident throughout her journal. She has employed humor and lightheartedness to tell the story of her journey through a life-threatening illness, and her positive attitude gives her readers the feeling that the suffering hasn’t been all that bad, but it has been.

Storming heaven for a miracle

When Lindsay first learned of her illness, a small group of relatives and friends decided to organize and publicize a prayer campaign on her behalf. In a few short weeks, our prayer effort grew from individuals to prayer groups to entire congregations.

And it went nationwide when, in his February 28 online commentary (e-mailed to about 70,000 subscribers), Priests for Life national director Father Frank Pavone described Lindsay as a heroic mother, requested prayers for her and referred readers to a YouTube video about her situation. The video features my son Tim, who, after briefly telling Lindsay’s story and describing her courageous choice, makes this plea: “Reese needs her mama, Justin needs his wife, Lindsay needs a miracle and they need your prayers. Please pray to the Virgin Mother, Pope John Paul II and Saint Gianna Molla” (see sidebar).

Now, our entire “extended prayer family” has been touched profoundly by her serenity, cheerfulness and courage. Nancy, her mom, commented, “We always knew she was someone special, but now everyone knows.”

On March 15, Nancy reported, “Lindsay is currently doing very well after beginning a new drug therapy.” And on March 21, Lindsay wrote, “I’m feeling so good! Little by little, I’m getting some energy back, and most days, I only have to take one or two extra pills for breakthrough pain.” Her observable tumors are now definitely shrinking.
Lindsay’s battle against cancer is far from over, however, and so we implore you to pray for a miracle for her and her family. And with the deepest, heartfelt gratitude, we thank everyone who has already been praying for them. Thanks to those prayers and her dedicated doctors, we now have reasons for hope. Hosanna in the highest!

Myron Jude Tassin and his wife, Shirley, live in Crested Butte, Colorado, and Destin, Florida.  Happily married for 57 years, they have four children, 15 grandchildren and one great granddaughter. Myron grew up in Louisiana’s French Catholic community, earned a journalism degree from Louisiana State University, is the former executive director of the Louisiana Architects Association, and has authored or co-authored 20 books on historical topics.

In June 2005, after Pope John Paul II’s death, the Diocese of Rome (which is handling his cause for sainthood), issued this prayer to implore favors through his intercession:

O Blessed Trinity, we thank you for having graced the Church with Pope John Paul II and for allowing the tenderness of your fatherly care, the glory of the cross of Christ and the splendor of the Holy Spirit to shine through him. Trusting fully in Your infinite mercy and in the maternal intercession of Mary, he has given us a living image of Jesus the Good Shepherd, and has shown us that holiness is the necessary measure of ordinary Christian life and is the way of achieving eternal communion with You. Grant us, by his intercession and according to Your will, the graces we implore, hoping that he will soon be numbered among Your saints. Amen.

In 1994, the late pontiff beatified a heroic Italian doctor, Gianna Molla, and canonized her in 2004. Saint Gianna was diagnosed with a large fibroid tumor during pregnancy and opted for removal of only the tumor, to spare her baby’s life. In 1962, just a few days before she gave birth to her daughter Gianna Emanuela, she told her husband, “If you must decide between me and the child, do not hesitate: Choose the child—I insist on it. Save the baby.” She died one week later, and is now a patron saint for mothers, doctors and preborn babies. Lindsay’s response was identical to Saint Gianna’s; thus we seek her intercession and that of soon-to-be Blessed John Paul II, for Lindsay’s healing. Prayers asking for Saint Gianna’s intercession are available at SaintGianna.org.

Myron Jude Tassin and his wife, Shirley, live in Crested Butte, Colorado, and Destin, Florida. Happily married for 57 years, they have four children, 15 grandchildren and one great granddaughter. Myron grew up in Louisiana’s French Catholic community, earned a journalism degree from Louisiana State University, is the former executive director of the Louisiana Architects Association, and has authored or co-authored 20 books on historical topics.