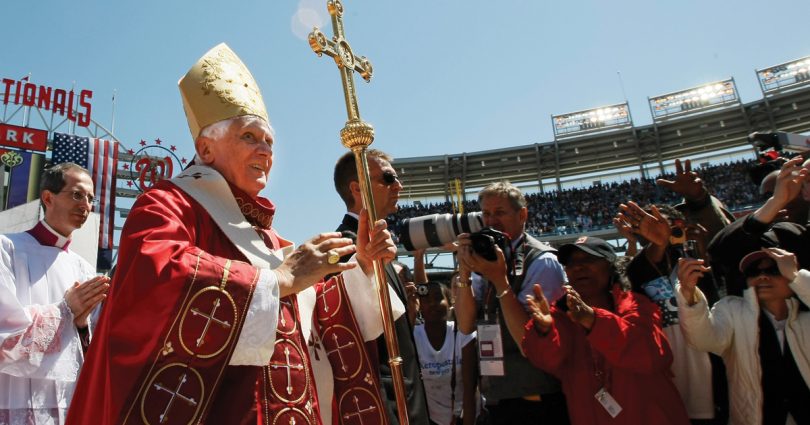 “Try as we might, no one can think better than God. This simple idea, one might say, lies in the heart of Ratzinger’s so called conservatism,” declares Brennan Pursell in Benedict of Bavaria: An Intimate Portrait of the Pope and His Homeland. Pursell has written the first English-language biography of Benedict based on German sources and I met this prescient historian in Washington, D.C. to discuss his new book while the Holy Father was there. One fact that most surprised Pursell was Pope Benedict’s intellectual genius. Pursell discovered numerous eyewitness accounts of this pope composing entire lectures, homilies and chapters of books off the top of his head in a state fit for print, either by dictating or handwriting them. Even his in-depth interviews became bestsellers for the authors.

“In Germany, it’s normal for Ratzinger to be called ‘the Mozart of theology,’” Pursell said. “The great Wolfgang Amadeus Mozart would compose entire operas in his mind and sit down and write them out. So that’s the parallel.”

Throughout Brennan Pursell’s Benedict, I found myself at home with the pope every step of the way. Best of all, I came to know precisely why he is the Vicar of Christ—and it isn’t his intellectual genius. Rather, God made him our “papa” because he lives the genius of love. In chapter after chapter, his family, friends, colleagues, students and challengers seem to agree that, like God, this modest priest has true fatherly love for us.

Many Americans confuse the license of irreverent individualism or what Pope Benedict calls “the dictatorship of relativism” with true liberty. To the contrary, President George W. Bush honored Pope Benedict as the first head of state that he ever welcomed on the tarmac of Andrews Air Force Base. The president told EWTN’s Raymond Arroyo, “…the Holy Father represents and stands for some values that I think are important for the health of the country and, when he comes to America, millions of my fellow citizens will be hanging on his every word.”

George Morton, editor of the Parish Visitor, told me, “It was amazing to witness the respect that the media, the military and the Secret Service have for the pope— the office even more than the man. A young Hassidic Jewish woman who wanted to see my photos exclaimed, “It’s the pope!”

Brennan Pursell and I witnessed the same awe from CNN’s Wolf Blitzer, who beamed after meeting the Servant of the Servants of God. Blitzer showed everyone a medallion the pope had given him, said that he hoped he had properly represented his journalistic colleagues and then was rendered speechless. Thus, Pursell observed, “This shows you the divinity of the office.”

Pursell emphasized, “Pope Benedict’s hallmark is clarity and he knows how to speak to people. Here, I think he decided that it’s more important to refer to the right—the ‘right to life’ as it is present in the fundamental documents of the American Constitution—and to explain where that idea comes from and undergird it. He’s co-opting it, to a certain extent, rather than saying it’s a religious or political movement.

“For Pope Benedict,” said Pursell, “the fact that abortion is an evil is a no-brainer and it’s a sign of his total continuity in Catholic teaching. He knows exactly what the culture of death is. It is called Nazi Germany and he grew into the age of reason and into manhood while that disease was taking over his country and spreading its murderousness across Europe. When he was 14 years old, a cousin of his who had Down syndrome was removed from the family when a therapist showed up to take him away. Later the family heard that the cousin had ‘died.’

“Pope Benedict knows what happens when a root is invested in a person that isn’t God. The lesson is that whenever we try, in history, to turn ourselves into gods, we make a farce of ourselves and we make mincemeat of those around us,” Pursell concluded.

The sexual abuse by some American Catholic priests was a terrible scandal, but if HBO’s Bill Maher thought he could defile the Holy Father with verbal vomit, Maher had another thing coming, since this pope has vanquished much greater enemies. As he recalled in his 1998 memoirs, “We were told very loudly in the new [Nazi] Germany ‘there will not be any more priests…’ I understood that in confronting the brutality of this system, this inhuman face, that there is a need for priests as a contrast to this anti-human culture.”

Preaching “Christ, Our Hope” at the people’s Mass in Washington, D.C., Pope Benedict said, “It is in the context of this hope, born of God’s love and fidelity, that I acknowledge the pain which the Church in America has experienced as the result of sexual abuse of minors. No words of mine could describe the pain and harm inflicted by such abuse. It is important that those who have suffered be given loving pastoral attention.”

After the Holy Father privately met with some of the abused, victim Bernie McDaid told CNN’s Campbell Brown, “I don’t go to Mass, but today I went with my mother, and his sermon there and his apology about the sexual abuse blew me away and I had tears in my eyes that I wasn’t ready to have. It was an incredible moment for me.”

The following are excerpts from Pope Benedict’s April 16 address to all Catholic bishops of the United States in Washington, D.C. “While it is true that this country is marked by a genuinely religious spirit, the subtle influence of secularism can nevertheless color the way people allow their faith to influence their behavior. Is it consistent to profess our beliefs in church on Sunday, and then during the week to promote business practices or medical procedures contrary to those beliefs? Is it consistent for practicing Catholics to ignore or exploit the poor and the marginalized, to promote sexual behavior contrary to Catholic moral teaching or to adopt positions that contradict the right to life of every human being from conception to death?

“People today need to be reminded of the ultimate purpose of their lives. “In the United States, as elsewhere, there is much current and proposed legislation that gives cause for concern… and the Catholic community, under your guidance, needs to offer a clear and united witness on such matters. Even more important, though, is the gradual opening of the minds and hearts of the wider community to moral truth… Crucial in this regard is the role of the lay faithful to act as a ‘leaven’ in society. Yet it cannot be assumed that all Catholic citizens think in harmony with the Church’s teaching on today’s key ethical questions. Once again, it falls to you to ensure that the moral formation provided at every level of ecclesial life reflects the authentic teaching of the Gospel of life.”