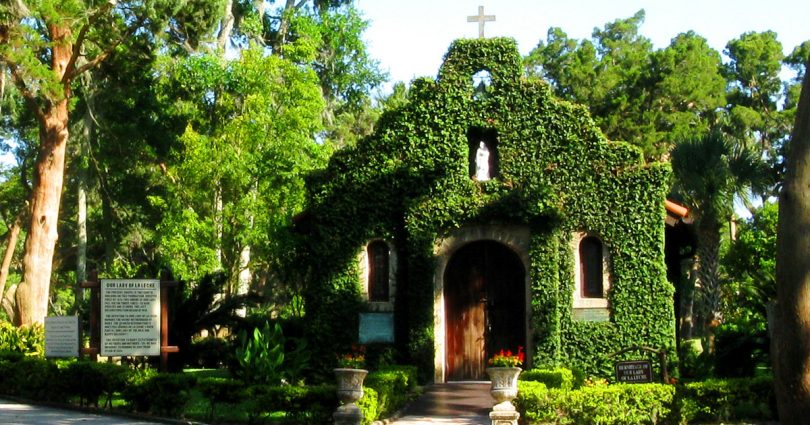 While many couples unable to have a baby are choosing fertility treatments that are contrary to Catholic teaching, others are finding miraculous answers at the Shrine of Our Lady of La Leche in St. Augustine, Florida.

“My mother wanted a baby but couldn’t have one, so she came here to the chapel to pray, and here I am!” quip many pilgrims to shrine staff. They believe that, without the intercession of Our Lady of La Leche y Buen Parto (Spanish for “Our Lady of the Milk and Happy Delivery”), they might not have come into the world.

“It’s no spiritual coincidence that the shrine is a wellspring of life,” says Eric Johnson, its director. “The shrine is part of Mission Nombre de Dios (“Name of God”), where the first parish Mass in what is now the United States was celebrated on September 8, 1565—the feast of the Nativity of Mary.” He also explained that the shrine has no association with La Leche League.

Honoring Mary as a nursing mother

Located on what is known as “America’s most sacred acre,” the ivy-draped, Spanish mission-style chapel of coquina stone has an aura of peace and grace. Over the entrance, there is a statue of St. Peter holding the keys to heaven, while inside, small wooden benches seat about 30. Behind the altar, a halo of light encircles a wooden statue of Our Lady of La Leche nursing the infant Jesus.

There’s more to the handcarved icon, however, than a beautiful maternal image. Painted in the style of Old World iconography, the statue’s colors each have a special meaning. The cream color of Jesus’ blanket and nightshirt symbolizes that He is the Lamb of God. Mary’s red dress signifies a sacrifice—the death of her Son on the cross—and the blue mantle her humanity. She is, after all, a mother.

And that’s why Our Lady of La Leche is so endearing, say Anthony and Lisa Smrek of Jeffersonville, Pennsylvania, the parents of two “special deliveries.” “We don’t always think of the Blessed Mother as a nursing mother. We see beautiful pictures of her gazing at Jesus, but here she is nursing and nurturing her Son.”

The Smreks first visited the Shrine in 1996, following a harrowing ordeal in which doctors diagnosed Lisa with a tubal pregnancy and advised her to get an injection to terminate the pregnancy. But heaven intervened when a nurse named Maria persuaded the couple to get a second opinion. This time, the conclusion was that she did not have a tubal pregnancy. Shaken by the experience, the couple knelt before the statue and asked our Lady’s intercession for a happy delivery. Daughter Dana healthy in every way arrived six months later.

Nurse Maria’s advice saved their preborn baby, but it would take another “Maria” to give them a second child. “I had medical procedures and surgery, but I couldn’t get pregnant,” Lisa explained. “I remember thinking, ‘I’m a good Catholic girl. My husband and I love each other. Why can’t I have another baby?’”

In October 2000, the couple made a second pilgrimage to the shrine and again asked our Lady’s intercession. Their prayers were answered much faster than expected. The beginning of life for their son David now seven years old can be traced to the time of their stay in St. Augustine!

“There’s a presence in the chapel,” said the Smreks, who promote devotion to Our Lady of La Leche to couples experiencing infertility problems. “Medical procedures aren’t always the answer. There’s prayer and trusting the plan of God.”

While devotion to Our Lady of La Leche is many centuries old, the practice is not widely known in the U.S. According to one tradition, it began around A.D. 4 in a Bethlehem cave, where the Holy Family reportedly took refuge during Herod’s slaughter of the innocents before fleeing to Egypt. It’s said that as Mary was nursing the Christ child, drops of her milk spilled to the ground and turned the dark stones to milky white.

Known today as the Milk Grotto and tended by Franciscan friars, women of the Christian and Muslim faiths like generations of maternal ancestors before them flock to this cave, seeking our Lady’s intercession for infertility issues, problem pregnancies, and babies born with medical conditions or disabilities.

Nobody knows exactly how the piety spread from the Holy Land to Europe. But it had obviously reached Spain before the early 1600s. Spanish settlers brought a statue of Our Lady of La Leche to St. Augustine and established the country’s first Marian shrine on the very site where the first parish Mass was celebrated on Mary’s birthday in 1565. The statue was highly venerated, as a symbol of Mary’s maternal solicitude, by the Spaniards as well as Indian converts.

Miracles of the heart

Since the shrine’s establishment some 400 years ago, the number of prayers answered there is staggering. When Bill’s wife Marie (many testimonies left at the shrine include first names only) suffered seven miscarriages after giving birth to their only child eight years earlier, he took “Mama to Our Lady of La Leche to get her pregnant.” Mama got pregnant and this time carried the baby to term.

“Prayers aren’t always answered the way people want or expect,” cautioned Johnson, however. “Some hopeful couples do get pregnant, but others experience another kind of miracle—a miracle of the heart.”

That was true for a Louisiana couple who returned to the shrine to retrace the steps of a pilgrimage they made 35 years earlier. Then, they had come to pray for a family. “Here we found the peace and courage to accept God’s will,” they told Johnson. “If we couldn’t have a child of our own, we would adopt.” And adopt they did—they became parents to nine and grandparents to 20!

Not all pilgrims, however, are seeking our Lady’s intercession for fertility matters. Some women and teenage girls are pregnant and contemplating an abortion. They may be rape or incest victims, or are unmarried, or they don’t see how God can provide for another child. Kneeling in the chapel, they lift up their hearts to Mary as the Mother of Life and pour out their agony. Only heaven knows the number of abortions our Lady’s intercession has prevented.

Yet other pilgrims seek consolation and forgiveness. “For my unborn child whom I aborted when I was young,” one woman wrote, with deep remorse. “I didn’t know—I am so very sorry.” Outside the chapel, a statue of an angel overlooking a memorial honoring the preborn offers a reassuring presence and seems to be saying, “Your babies are in God’s everlasting care.”

“The shrine affirms and supports life,” said Johnson, adding that pro-life vigils and Masses are held there. “Wounded hearts find healing of the spirit, and many, the blessing of parenthood.” To learn more, visit www.missionandshrine.org or call 800-342-6529. Prayer petitions can be mailed to Our Lady of La Leche Shrine, 27 Ocean Ave., St. Augustine, FL 32084.

An award-winning journalist, Marion Amberg (www.marionamberg.com) has written for more than 100 publications and frequently covers topics of faith. She is the author of Penny Prayers: True Stories of Change (Liguori Publications) and of the forthcoming 2021 release Monuments, Marvels, and Miracles: A Traveler’s Guide to Catholic America (Our Sunday Visitor).