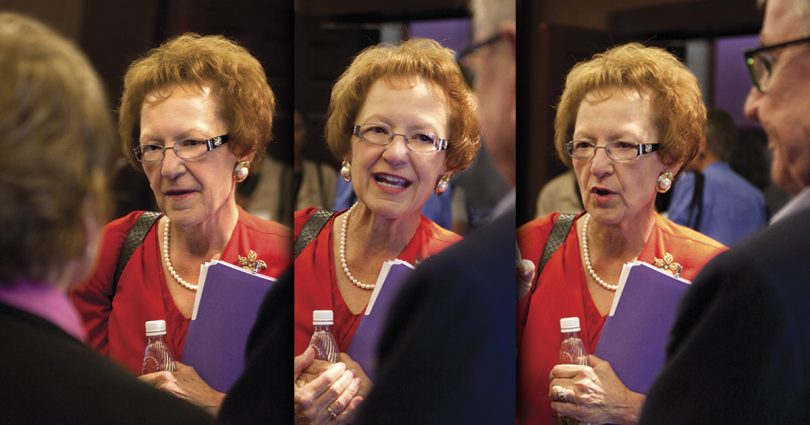 (Editor’s note: Judie Brown is cofounder and president of American Life League, and a three-term member of the Pontifical Academy for Life. The Broken Path is her 12th book.)

Please explain the subtitle of your new book, The Broken Path: How Catholic Bishops Got Lost in the Weeds of American Politics.

A bishop’s mission and calling is to be a shepherd of souls and a leader of the faithful as he imitates Christ. But what has happened in modern-day America is that far too many bishops have decided that being a political figure is more important than being a shepherd, and thus many Catholics no longer regard their bishop as a spiritual leader. This is perhaps most evident in the struggles we’ve had with the enforcement of Canon 915 [with regard to Catholic public figures who support abortion yet receive the Holy Eucharist]. My whole perspective for this book was that there’s a problem when an ordained minister—whether a deacon, priest, or bishop—gets involved in politics. I’m hoping this book provides some medicinal support for the idea that Catholics need spiritual guidance from bishops more than anything else.

But don’t bishops have an obligation to guide their flocks on principles for voting and involvement in the legislative process?

Oh, absolutely. What I’m referring to, in this context, is bishops inserting themselves directly into the political process. Once, as I was waiting in a bishop’s office to see him, he apologized for being late because he was on the phone with a congressman. Another example is all the bishops who had telephone conversations with Nancy Pelosi about the Stupak Amendment in Obamacare. That’s not what the Church calls bishops to do; rather, bishops are called to equip the laity to directly address political matters in accordance with Catholic teaching.

Why did you write this book?

When over 90 percent of Catholics find no problem with birth control in marriage, there’s a serious crisis of authority in the Church. Based on my 30 years of giving talks to Catholic pro-life audiences, I would say most Catholics don’t even know what the Church teaches about topics such as contraception and in vitro fertilization. Therefore, they have no problem with using them. I can’t tell you how many questions on these topics I’ve answered during talks. I’ve had to pull out the Catechism of the Catholic Church and other Church documents, and actually read what the Church teaches, because it’s foreign information to most Catholics—even pro-life Catholics.

In the 2008 elections, 54 percent of Catholics voted for Obama. Then we had Obamacare, and the U.S. Conference of Catholic Bishops was cheerleading for the passage of this horrible piece of legislation. That just agonized me. This is all part of the whole problem of bishops being political and not pastoral. But I can’t complain about this problem if I don’t have a solution, and my solution was to write this book and diagnose the problem. If the book does nothing else than help Catholics see and understand the beauty of their own faith, and appreciate the heroic priests and bishops who do teach it, then this book was worth writing.

What’s the difference between The Broken Path (TBP) and your 2007 book, Saving Those Damned Catholics (STDC)?

The two books take a completely different approach to presenting facts. In addition, TBP presents new topics and many new anecdotes; it departs from the anonymity used in STDC. In STDC, I didn’t address certain subjects, such as the historical perspective on Americanism and homosexuality in the priesthood. In TBP, I wanted to contrast courageous clergy who go against the tide with those who aren’t defending the truth (thus making it harder for Catholics to know what it really means to be Catholic).

You devoted two entire chapters to the history of the Catholic Church in the U.S. Why?

Few understand that Americanism is a cancer that has overwhelmed the Church in America. It views American Catholics as not answerable to the Vatican; in other words, the pope is a figurehead and the U.S. bishops’ conference can function on its own as an entirely separate entity. Americanism is a philosophy quite similar to secularism or moral relativism, which puts the country’s politics and the pride of being an American way ahead of the pride of being a Catholic. This leads to Catholic public figures regarding Catholicism as having nothing to do with how they behave publicly. Unfortunately, there are bishops in the same category: men who believe it’s better to go along to get along than to be courageously Catholic, that it’s not necessary to be willing to stand up and be excoriated by the media, to defend the faith. In my conversations with bishops, I’ve found that some have great fear of the media.

When a bishop goes out on a limb to do the right thing, does ALL publicly support them?

Oh, absolutely. We’ve run full-page ads and online petitions, and done all kinds of things. We’ve never neglected to defend a courageous bishop. There are bishops who are doing the right thing. We call the bishop’s office and ask how we can help them. If you’re going to point out an error a bishop has made, you have a moral obligation to point out all the good things bishops do, too—or you shouldn’t say anything. In the book, I praised a number of bishops and priests.

Have the Catholic laity, in some cases, failed to adequately support courageous bishops who do speak out and publicly defend crucial Church teachings when they’re challenged? And if so, might that lack of support discourage a more timid bishop who, in his heart, also wants to be courageous for the faith?

That’s not a possibility; that’s a reality. When U.S. bishops do the right thing and say things that need to be said, they’re savaged in the media, they’re savaged by other Catholics, and they’re savaged by politicians. And bishops who do the right thing are often not lifted up and praised; they’re scandalized by the kind of reaction they receive, and therefore, some crawl into their office and don’t talk to the press because they don’t want anybody angry. That’s not what they’re about. They’re not politicians. People have to stop treating bishops like politicians because they’re not. They’re men of God, the successors of the Apostles.

Since The Broken Path criticizes certain bishops’ actions (or lack thereof), how would you respond if you’re accused of being disrespectful towards bishops?

Archbishop Fulton J. Sheen once said, “Who is going to save our Church? Not our bishops, not our priests and religious. It is up to you, the people. … Your mission is to see that your priests act like priests, your bishops, like bishops, and your religious act like religious.” Never have I or this organization criticized an individual because of their attitude. And when I’ve found myself in error, I’ve always apologized publicly and privately. None of us are perfect. Because some might criticize me for saying things perceived as critical of a person, rather than just his actions, all the facts in this book are documented with footnotes.

Is this crisis unprecedented in the Church?

Oh, no. When Saint Athanasius was working against the Arian heresy, he was about the only bishop doing so, and today we have many bishops doing everything they possibly can to bring people back into the reality of being proud to be Catholic first and proud to be an American second.

Are you encouraged by any trends in the contemporary Church?

Absolutely. I’ve met more orthodox priests everywhere I go. There are many good priests. What I’m encouraged about more than anything else is that the seminarians now being ordained are much more orthodox. These are priests who are so proud to be Catholic, who take the time to explain the Church’s teachings and traditions to their people. That’s what we hope will happen in the end: Catholics will understand what it means to be a Catholic, and that every rule and regulation the Church has is for a positive good and the joy of the heart. We’ve now got many, many priests and bishops preaching that. I’m hoping that this book helps clergymen who are struggling to be the shepherds they’re called to be, to realize it’s possible to go against the tide and be inspired by others’ example. Get out of the weeds, and start being a spiritual father and teacher to your people.

While writing this book, did you get insights or learn things you didn’t expect?

Yes! More than one bishop’s assistant explained to me the minefield a bishop steps into the minute he says anything publicly. One told me that a truly heroic bishop doesn’t like to set foot in front of a microphone because it’s the antithesis of his vocation. He’s not a media figure, but there are times when it’s necessary to speak out. He explained that if you’re truly inspired by the Holy Spirit and speak out of love for the Church, you have nothing to be afraid of, even though the media is going to chew you up and spit you out. They’re not judging your actions for all eternity, so they’re just a minor roadblock you have to confront. Hearing that explanation inspired me.

Every chapter ends with positive, practical steps readers can take to help remedy this crisis. Many revolve around affirming priests and bishops, because it’s usually the “good guys” who never get a pat on the back. To learn what the solutions are, you’ll need to read the book!

Click here to learn more and order The Broken Path.

SIDEBAR: ‘One of my favorite sections’

(Editor’s note: Celebrate Life copy editor Susan Ciancio wrote the following to Judie Brown about Chapter 11 of The Broken Path.Titled “Contraceptive Cowardice,” this chapter discusses the failure of many bishops and priests to properly educate Catholics on the Church’s teaching on birth control.)

This was one of my favorite sections of the book because it’s so true and so simple, yet not enough people understand this:

One of the reasons why there are an infinitesimally small number of divorces among couples who understand their relationship with God and His gift of children is that they have chosen never to leave God out of any aspect of their married lives. I am not here describing a “perfect” marriage, but am defining one that is grounded in God rather than worldly whim and fancy.

I would love to share this section with my daughter when she’s a bit older, because it speaks the truth in a loving, yet matter-of-fact manner. When God is invited into a marriage and when the spouses lives by His laws, they’re both happier and healthier—as are their children. Honest talks and solid Catholic materials, such as this book, will go a long way toward helping adolescents really understand sexuality and properly prepare them for marriage.