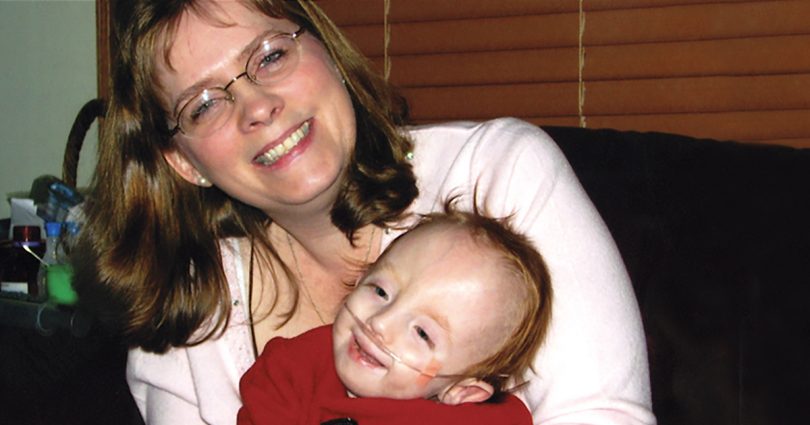 When I was 19 weeks pregnant, an ultrasound of my baby revealed markers for a condition called trisomy 18. My husband, Don, and I were offered amniocentesis, which we refused because we didn’t want to risk hurting our baby. We were told we would have more choices if we knew for sure. We said we would never abort our baby, but would love him no matter what. We named him Peter. We were told no babies with trisomy 18 survived beyond two weeks and that most people aborted these babies.

At 34 weeks, I had an emergency Caesarean section. Peter was born on January 5, 2005, weighing three pounds and two ounces. He was given excellent care until the second day of his life, when a test for chromosomal abnormalities revealed he did have trisomy 18. It was recommended that we stop all treatment, wrap him up in a blanket, and let him die. We were told he would lead a life of terrible pain and suffering, and would never know or respond to us.

Through her research on the Internet, one of my daughters discovered that many children live with this condition, and some live until their twenties and thirties. When I asked the doctor why he had lied, he said, “Well, how these children do largely depends on the choices their parents make for them.” I responded, “How can parents make decisions when they don’t receive accurate information?” He then said, “Well, we have to think about resources, and you know, Peter will never be able to contribute to society and will be a horrible burden to your family.” I started to cry, because I knew resources meant money. It hurt so badly to have a doctor tell me my son wasn’t worthy of the treatment he needed to help him live.

A woman doctor, whom I hadn’t met until after Peter was born, entered my hospital room and said she wanted to talk to me as a mother, not as a doctor. She said that if I wanted to be a good mother to my other children, I had to let Peter go because he would be a burden to our whole family and it wouldn’t be fair to them. I could do nothing but cry.

We were told our son’s heart defect was fatal. Something told me the doctor wasn’t telling the truth, so we made our own appointment with a pediatric cardiologist. He shook his head, saying Peter’s heart was stable and functional, but he did need a minor surgery called a PDA ligation.

The doctor at the hospital told us that Peter wasn’t a candidate for this surgery, which was described to us as open-heart surgery. We were asked why we would want to put our son through that. It wasn’t open-heart surgery, but rather a minor procedure to close a blood vessel. This is just a small example of the medical professionals’ incomplete and inaccurate information, and outright lies.

We were pressured over and over to sign a do-not-resuscitate order. We were even told we couldn’t receive home-care visits from a nurse unless we signed it. I called the director of the home-care nursing program and asked her if this was true. Flabbergasted, she told us this wasn’t their policy, nor had it ever been. When I confronted the doctor about that, she said, “Well, they must have changed their policy.” I responded, “No, it has never been their policy.”

We were very concerned about our son’s welfare. It was very hard leaving him at the hospital, knowing the staff felt as they did. We called the head doctor of the neonatal intensive care unit at the University of Minnesota Medical Center for a second opinion and shared our concerns. When the doctor at the hospital where Peter was found out, she was very angry. The next day, she said we had two choices: We could take Peter home, or we could transfer him to a children’s hospital. She said we had to leave her hospital.

We decided to take Peter home. He then weighed only three pounds and 11 ounces. He thrived on all the love and attention we gave him, and grew and did many things we were told he would never do, like drink from a bottle and eat by mouth. He knew us and loved us, and we loved him. He was the happiest, sweetest little boy, and he was everyone’s favorite. He was never, ever a burden—only a joy and a blessing. He made us all better, and taught us so much about love and compassion for others. He was the best of us. He brought our family tremendous joy.

Dictatorship over life and death

Peter died at Children’s Hospital in Minneapolis at age six and a half, under very questionable circumstances. He died the day after having his appendix removed. At that time, we were told he died because of infection from appendicitis and that his heart just couldn’t take it. We had watched his stomach getting bigger and had asked if he could be bleeding.

The doctor had ordered an ultrasound, which we watched him do himself. He told us all he saw was air. A short time later, Peter was dead. We knew something was terribly wrong, so we requested an independent autopsy. The doctor who performed it said Peter had bled to death. He had almost a liter of blood in his abdomen. There was no infection and his heart wasn’t the cause of death.

When we received all of Peter’s medical records, we looked for the ultrasound scan. There was no scan, only a report from the doctor who did the test, saying there was air in Peter’s abdomen. We discovered later that the hospital where Peter died has an internal futility-of-care policy that the public doesn’t know about.

On July 8, 2012, the Telegraph (“Hospitals ‘letting patients die to save money’”) reported that in the United Kingdom,

Tens of thousands of patients with terminal illnesses are placed on a “death pathway” to help end their lives every year. However, in a letter to the Daily Telegraph, six doctors warn that hospitals may be using the controversial scheme to reduce strain on hospital resources. . . . Last year the Daily Telegraph reported that the numbers being put on the pathway had doubled in just two years, with tens of thousands of patients now involved. But up to half of families are not being informed of clinicians’ decision to put a relative on the pathway, the report by the Royal College of Physicians found.

Hospitals around the United States—nobody knows how many—have been quietly promulgating internal futility-of-care policies. Wesley J. Smith, a bioethicist, wrote the following about these policies:

If the principle is ever established that doctors, hospitals, and faceless ethics committees can dictate who can live and who must die, the already weakening faith of the American people in their health-care system will be seriously undermined and the door will be thrown wide-open to medical decision-making based ondiscriminatory hierarchies of human worth [emphasis added]. As German physician Christoph Wilhelm Hufeland wrote presciently in 1806, “It is not up to [the doctor] whether . . . life is happy or unhappy, worthwhile or not, and should he incorporate these perspectives into his trade . . . the doctor could well become the most dangerous person in the state.” (“Death by Ethics Committee: Refusing to treat lives deemed unworthy of living,” National Review Online, April 27, 2006)

Was my beloved son Peter a victim of the hospital’s internal futility-of-care policy? Did someone make a decision to let him bleed to death, based on a “discriminatory hierarchy of human worth”? Was his life deemed not worthy of the most basic treatment because he was a little boy with a disability who, in some minds, would never be able to contribute to society?

On the one-year anniversary of his death, his 10 siblings; 13 nieces, nephews, and other family members; and five Catholic priests got together to celebrate Peter’s life and remember all he did for all of us. Every person there and many more could tell you how this sweet little boy contributed. He made his family and all of those who knew him better people. That’s what these precious kids with disabilities like Down syndrome or trisomy18 do for us. Over 90 percent of these kids are aborted, and will never have the chance to experience the love of their families and help us be more compassionate, loving people. Peter was pure love.

These kids are teachers of our souls, and the world needs all the blessings they bring us. No one should have the right to make treatment decisions about anyone based on policies that the patient and family aren’t even aware of. Our family has to live with the pain of how Peter died, knowing it very likely didn’t have to be like it was. We’ll always consider him our greatest gift, besides our faith.

Fighting back against ‘futile-care’ policies

In March 2012, after her son Peter’s mysterious and tragic death, Mary Kellett testified on behalf of a bill in the Minnesota state legislature requiring children’s hospitals to disclose futility-of-care policies to parents. The bill didn’t pass, but backers hope to introduce it again. At the hearing, she declared,

I have talked to many other families who also have children with disabilities that have similar concerns and stories to share. By having this policy, doctors and hospitals are making a value judgment about children that only parents have the right to make. The hospital spokesman has testified that this policy is rarely used and families know about it. We were never told about this policy. . . .

This bill simply gives parents the right to know if a hospital has a futility policy and what it is. It provides a level of consumer protection in health care choice. . . . And [parents] have a right . . . to be the decision makers for their child’s health care. . . . Doctors who often see children only when they are sick and hospitalized are in no position to make life-and-death decisions about futility of care without parental knowledge.

In 2012, Idaho enacted a law banning the denial of end-of-life care (including nutrition and hydration) without the consent of a patient or his agent, unless death is imminent. In 2013, Oklahoma enacted a law preventing health care providers from refusing life-preserving treatment, nutrition, or hydration, based on “a view that treats extending the life of an elderly, disabled, or terminally ill individual as of lower value than extending the life of an individual who is younger, nondisabled, or not terminally ill.” Also in 2013, Michigan enacted a law requiring health care facilities or agencies that have a “medical futility” policy to provide a copy of it to patients or residents upon request.

According to the Patients Rights Council, a federal law on advance directives mandates that, upon admission, a health care facility must provide the patient or his agent with written policies on any limitations on carrying out the patient’s or agent’s wishes.

* Patent ductus arteriosus (PDA) is a condition in which a small blood vessel in the heart fails to close soon after birth, as it should. In some cases, surgery (ligation) is required to close it.

Mary Kellett is executive director of Prenatal Partners for Life, a group of concerned parents, medical professionals, legal professionals, and clergy, whose aim is to support, inform, and encourage expectant or new parents facing an adverse diagnosis of their child. Peter inspired Mary to start PPFL in 2006 (see Celebrate Life, Sept.-Oct. 2008. PPFL has supported families in every state and 37 countries. This article first appeared in the March 2013 PHA Monthly, a newsletter published by the Pro-life Healthcare Alliance, and is reprinted with permission.