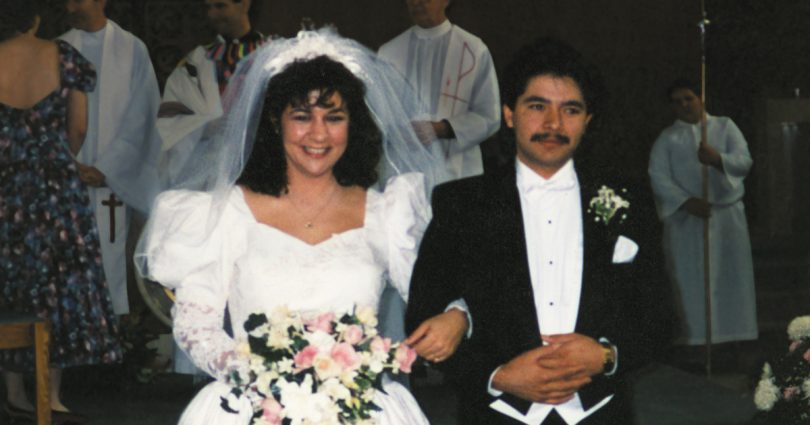 Our culture tells us to believe “this is my body,” meaning that God has no right to the very bodies He gave us. Yet when Christ said “This is My body,” He consecrated the Eucharist and was hung on the Cross. Because Jesus fully gave of Himself, I always wanted to be close to God, but it took me years to trust God with both my body and soul.

In public school, we were browbeaten with the overpopulation myth and false liberties. My parents knew of Planned Parenthood’s influence on sex education and, in the mid 1970s, successfully campaigned to have discussions of abortion and so-called alternate lifestyles removed from one version of the public school program. However, when I tried to sign up for the better program before 11th grade, I was ridiculed. It was the final blow that wearied me of defending my Catholic faith in public school, so I sought a true Catholic education and entered a Catholic girls’ academy.

At first I was thrilled by the Catholic environment. Then, in 12th grade, the nun teaching theology said that Pope Paul VI hadn’t listened to his advisors, so Humanae Vitae was not to be heeded. In psychology class, another sister worked in birth control lessons and told us to hide the notes from our mothers. When my mom saw those notes after graduation, she was horrified by the betrayal and damage.

After college, the worldly attitude sometimes prevailed in my dating life. Consequently, my heart was broken numerous times and I feared that I would never find someone to marry and raise a family. After each fall I went to confession and made a new start, but still didn’t realize that using artificial birth control was a sin.

Eventually, I offered all my fears about marriage to Christ and asked Him for direction. A short time later, I ran into my friend Fernando, whom I knew through volunteer work in the Hispanic Catholic community. We started dating and love soon blossomed between us.

Once I knew that Fernando would be my husband, he wanted me to meet his “best friend.” He was secretive about who this might be—then he took me to a perpetual adoration chapel where I cried thankful tears because, despite my sins, Christ had mercy and sent me a godly Catholic man.

Regardless of my love for God and Fernando, the contraception mentality still had a grip on me. So before Fernando and I were married, he insisted that we attend natural family planning classes. There, my hardened heart softened. Each morning after we were married, I took my temperature and Fernando charted it. We found ourselves discussing the possibility of children on a daily basis, but I had no job and Fernando’s employment was seasonal. To make things worse, we had no medical insurance. Considering cultural pressures, we thought that having children would be irresponsible and ignored our natural desire.

One day, while at the beach with some girlfriends, I casually mentioned that I might be pregnant. The ladies were so thrilled that I had to remind myself, “It’s okay, I’m married!” It was deeply disappointing to find that I wasn’t pregnant, but my husband realized how his heart had been yearning for children. This was a most beautiful moment in our marriage—I cannot tell you how exciting our relationship was once we were truly open to life!

A month later, I thought I had bronchitis. Therefore, I went to the medical clinic where my cousin Donna was an X-ray technician. She had heard through the family that Fernando and I wanted children, so she made me take a pregnancy test before the X-ray. “You’re in the pink!” she said, smiling.

Delighted but terrified, I ran to the nearest chapel and said, “Jesus, thank you! Now help!” And our Lord wasted no time helping. The next day, a school district which had interviewed me a month earlier, called to announce that I was hired as a teacher.

That wasn’t all, God provided for all our financial needs, one by one. As I walked to daily Mass at lunchtime the first week of school, I wondered whether I would be covered by the school district’s health insurance since I was already pregnant. At Mass I saw a woman from the human resources department and she helped me get the plan that would cover my pregnancy expenses.

However, Fernando was without a job that winter, so we had little money for baby items. As usual, Fernando told me to trust God. Then, before my daughter Gabriela was born, I was given four baby showers where I was literally showered with all the baby items we needed.

During my fourth month of pregnancy I went to a mothers’ spiritual retreat. There, I was depressed because we couldn’t afford for me to be a stay-at-home mom as I had always dreamed. Nevertheless, I realized that again God asked me to trust Him.

Fernando had just moved us to a nicer apartment and was having cable TV hooked up. The cable guy noticed he wasn’t working and asked him if he wanted a job. Today, 14 years later, Fernando still works for that cable company and he has advanced to a supervisor in the internet division.

Likewise, since the school district didn’t renew my contract, when I delivered my first child, I began motherhood with unemployment benefits to help cover the bills.

When Gaby was two, we worried that we’d never be able to buy a home if I didn’t work full time, so I worked at another school. By the time we found a house that we liked, I was without work and unable to qualify for the mortgage. We were devastated because it seemed that our best plans had failed. But, as always, God had better plans.

That summer, we found a house that was in foreclosure and we put in a closed bid. I asked Blessed Mother Mary for a sign that the little house was to be ours. If the house was to be ours, I asked her, please have a rosebush in front of it. Sure enough, there was a rosebush in front of the home, so I took that as a “yes” and kept praying the Rosary for that house. On Holy Thursday our bid was rejected, but I told my husband that I believed the house would be ours. Meanwhile, we looked at other houses as I persisted in faith and prayer, thus supporting my Fernando as he always had supported me.

Two months later the other bid fell through, so the little starter home became ours. Once again, I was free to stay home and mother Gaby full time. As my friend Maria reminds me, “God sees and provides.”

Now we live in a lovely home near the beach. Fernando and I have three beautiful daughters and I can home school them. I have a part-time job teaching at a local college, my writing career looks promising and Fernando and I have learned to trust in God’s providence for our family.

God reveals the truth to everyone who seeks it. Indeed, despite the damaging errors taught to me in high school, little by little God helped me and Fernando to grow in surrendering our fertility to Him—and He continues to reward our faith. As the Psalmist said, “Trust in the Lord and do good, Dwell in the land and cultivate your faithfulness, Delight yourself in the Lord, And He will give you the desires of your heart.”

Leticia Velasquez is a wife and mother, an award-winning pro-life speaker and writer, cofounder of Keep Infants with Down Syndrome (KIDS), and author of A Special Mother Is Born (a collection of 34 stories from Catholic parents of special-needs children).