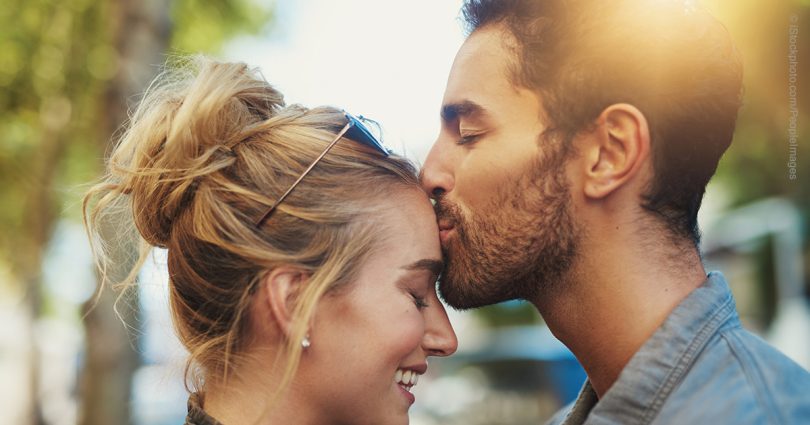 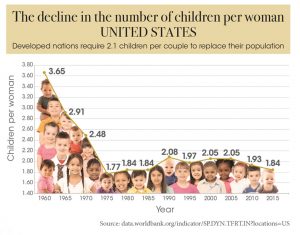 People may find this hard to believe, but the United States of America is suffering from a lack of children. How did this happen? According to the statistics referenced in the graph on the right, this phenomenon is the result of the effects of contraception, abortion, and sterilization.

Notice how the population began its decline in the 1960s with the introduction of artificial birth control in the US and much of the world. It was and continues to be the silent killer of babies, the corruption of the young, and the destruction of marriages. Never before has the traditional human family been in such danger of extinction.

We cannot say that we weren’t warned. On July 25, 1968, Pope Paul VI clearly wrote in his encyclical Humanae Vitae that if artificial birth control became accepted, divorce would increase dramatically; premarital sexual activity would rise to incredible heights; women would no longer be loved, respected, and revered; and promiscuity would increase, with its accompanying sexually transmitted diseases rising to epidemic proportions.1 (Today, one-third of all Americans have one.) Over the years, many governments have mindlessly promoted and even imposed these artificial methods of birth control on their people. As a result, populations have dramatically declined.

Though the Catholic Church foresaw this catastrophe and condemned the birth control pill, its leadership now appears perplexed as to what to do to reverse this catastrophic trend.

The most salient tragedy in these turbulent times has been the lack of honor and respect accorded to the heroic role of motherhood. Society has degraded the traditional vocation of the mother, resulting in the destruction of her maternal instinct. Instead of feeling cherished and treasured, many women today feel used. They were duped into believing they would be “liberated” from the traditional role of motherhood, which many claimed was holding them back from achieving their potential. The traditional mother, whose wisdom once formed the conscience of her children and became the guiding hand of knowledge between right and wrong, has been demeaned and mocked. Today, no substitute exists for her moral and spiritual knowledge and understanding. Instead, women are expected to leave the home and become breadwinners, competing in the marketplace alongside men.

The role of motherhood is unique and extraordinary. When God created woman, He gifted her with the precious role and responsibility of receiving a newly conceived life into her womb. Yet, today, modern woman often finds that society expects something completely different of her. She must either remain childless and a slave to artificial birth control—and possibly abortion—or carry her baby to term but return to work after a few months and leave her baby in the care of someone else. Additionally, to ensure that pregnancy will not happen repeatedly, and to keep her work outside the home from suffering, she may be convinced to continue with artificial contraception or to get sterilized. Sterilization destroys any possibility of her ever again becoming a cocreator with God. And, when we intentionally leave God out of our lives, the devil, who wants life to neither begin nor continue, enjoys a victory.

In addition to affecting a woman’s role as a mother, contraception and a desire to take control of reproduction affects a couple’s spousal life as well. The natural guilt, so often hidden by the couple but very much felt in their hearts, takes a toll on their vows. The lack of marital embrace, due to the exhaustion felt primarily by the wife, who now has more responsibilities than before, adds stress to an already stressful situation. Furthermore, the numerous side effects of artificial birth control, sterilization, and/or abortion may destroy her natural desire for intimacy and can lead to serious physical side effects. Not many women understand that the use of contraceptive hormones prior to a full-term pregnancy could lead to an increased chance of developing breast cancer 10 or 12 years later.2

Additionally, most parents are unaware that artificial methods of birth control can destroy the life of their newly created child, as most methods have an abortifacient effect. Such events turn parents into killers of their own children. The Physicians’ Desk Reference confirms that hormonal contraceptives have three mechanisms of action. They: 1) prevent ovulation; 2) thicken the cervical mucus to prevent sperm from entering the uterus and fallopian tube; and 3) alter the lining of the uterus so implantation cannot take place. The third action is considered abortifacient, as a new human being dies because he cannot implant into his mother’s uterine wall. The package insert of LO/OVRAL-28—a standard birth control pill manufactured by Wyeth Laboratories—also confirms this effect of the drug.

Pharmaceutical companies and Planned Parenthood attempt to deceive the public by implying that life begins at implantation rather than conception [conception is properly understood as the first moment of a baby’s existence]. According to a Pro-Life Wisconsin newsletter: “The truth in embryological science has clearly determined that human life begins at conception—the fusion of an egg and sperm immediately resulting in a new, genetically distinct human being. This is not a subjective opinion, but an irrefutable, objective scientific fact. Accordingly, any artificial action that works to destroy a human embryo between conception and implantation (five to six days later) is abortifacient in nature.”3

As soon as the word “create” is used, God is involved, as it is impossible for human creatures to create anything. The greatness and mystery of the marital embrace, elevated to the dignity of a sacrament, reveals clearly that there is a close collaboration between God and the spouses. They can contribute to the union of the male sperm with the female egg, but they cannot create the soul. . . . The special dignity of the female body consists in the fact that God creates the soul within her body, and that, therefore, there is a direct contact between Him and her. This dignity is denied her husband. When the spouses decide to
artificially prevent a conception, THEY CHOOSE TO EXCLUDE GOD—in so doing, they can no longer PROCREATE—because the Creator is ousted. The awesome dignity of their union in the sight of God is purposely eliminated. They then choose to COPULATE like animals. FOR ANIMALS CANNOT PROCREATE. In Natural Family Planning, God is in no way excluded: He Himself chooses to close the door to a new life.4

A contraceptive and anti-life mentality entices many young people, especially those who have witnessed their own parents’ failed marriages or who have suffered the consequences of growing up in a single-parent family. Primarily due to the introduction of artificial birth control, sterilization, and abortion,5 very few young people feel encouraged to enter into a lifelong commitment. Others feel incapable of embracing the gift of a child or of having the capacity to preserve their vows, often because they have become accustomed to a libertine lifestyle.

The solution to this culture-of-death mentality is prayer and reconciliation with God and a change of heart for those who have been misled for decades. Studies have confirmed that couples who welcome Christ into their marriages and follow Natural Family Planning with the Ovulation Method have happier marriages, seldom divorce, communicate better with their spouses, and attend church more often.6

The widespread use of artificial birth control, sterilization, and abortion among the people of the former Christian West, who have completely disregarded the teachings of Humanae Vitae, has now caused the same people to suffer the consequences of their defiance against the teachings of the natural, moral, and spiritual laws. As we think about and assess the history of the pill, sterilization, abortion, and the manipulation of the baby, we must resolve to teach our children that many problems within families today stem from disassociating love from procreation. Indeed, artificial birth control methods are chemical warfare against women and babies. As Prof. Jerome Lejeune said at the 4th International Congress for the Family in Paris in 1986:

These methods are all contrary to human nature and have killed more human beings than Hitler, Stalin, and Mao Tse-Tung put together.

Prayers for a changing world

The population graph on the right contains statistics about the countries of Mexico, China, and Russia. Below is a graph listing the most powerful countries in the world (the G-8). Notice that NONE of these countries is replacing its population. The only country that seems to recognize the threat to its future is Russia, which has actually increased the number of children per woman and even offered financial incentives to women to have more children. Furthermore, those in the West should find it interesting that the Russian government forbids pornographic sex education in schools. It has long been said that sex education in schools leads to promiscuous behavior in the Western countries and often results in teen pregnancies, which then frequently lead to abortions. The abolition of sex education programs may save many lives.

In addition, a society that reveres God and His laws will grow closer to becoming a culture in which every person—born and preborn—is respected and protected. An interview of the well-known German historian Dr. Michael Hesemann7 by American journalist Deborah Castellano Lubov confirmed that, as

the number of monasteries in Russia grew from 15 to 788, the number of faithful grew, from below 50 million in 1990 to over 113 million today. And today, 82% of all Russians follow Orthodox Christianity. The Russian state spends more than $100 million every year for the restoration of churches, which were destroyed or misused by the Communists. The 500 theological seminaries are full of young men who follow their vocation.

Is Our Lady of Fatima intervening in the conversion of Russia as she predicted in 1917? Of course she is!

Now more than ever, the world needs prayers and support for the conversion of the former Christian West. It is urgent that we follow the message of Our Lady of Fatima to save the family, to make people aware of the demise of the family, and to restore Christianity. After all, men, women, and children are the world’s greatest resource and we cannot continue to deplete it.

Mercedes Arzú Wilson is president of Family of the Americas Foundation and the author of Love & Fertility, which teaches the Ovulation Method of Natural Family Planning for achieving or postponing pregnancy naturally and is already in 23 languages.