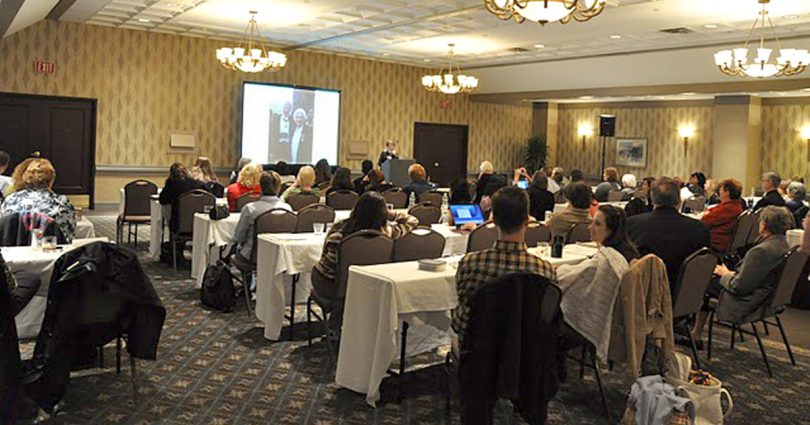 During its November 2009 meeting, the U.S. Conference of Catholic Bishops released Life-Giving Love in an Age of Technology, which examines the procreative and unitive aspects of marital love. In this 16-page statement, the bishops recommend that couples struggling with infertility should look to modern, scientific methods of naturally spacing children for hope, rather than in-vitro fertilization, or other disruptive and unnatural means for achieving pregnancy.

Hope was on hand at the International Billings Method Conference held recently in Oklahoma City, Oklahoma. The conference, organized by Sue Ek, executive director of the Billings Ovulation Method Association-USA, offered the opportunity for experts, physicians, medical personnel and teachers from around the world to share valuable information, personal experiences and the latest medical developments in the field of naturally spacing children. Attendees included those trained in the BOM, Creighton, Couple to Couple League and Marquette methods.

The conference brought together nearly 100 notables from around the world, including Dr. Lek-Lim Chan, a Buddhist convert to Catholicism and BOM instructor from Malaysia; Marian Corkill, senior BOM teacher from Australia; Fathers Daniel McCaffrey and Matthew Habiger of Natural Family Planning Outreach; Dr. Jan Hemstad, vice-president of the Catholic Medical Association; and Lloyd Duplantis, a registered pharmacist who has done extensive research on the action and side effects of hormonal contraceptives.

Conference attendees lamented the lack of a truly Catholic medical school that supports training in Church-approved methods of natural fertility regulation. One Canadian medical student, who asked not to be identified due to fear of reprisals, attended the conference but had to do so “under the radar” because of the lack of support for non-contraceptive methods.

One development discussed at length was the discovery of the important role that Vitamin D plays in fertility. Inadequate exposure to sunlight, the use of sunscreen, aging, low-fat diets and malabsorption can all contribute to Vitamin D insufficiency and also infertility. Duplantis said that, in North America, this insufficiency is common in all age groups and even more so among African-Americans. He noted that individuals seeking to achieve pregnancy may want to supplement beyond the current recommended daily allowance in order to reach and sustain an optimal level.

Teaching couple Tony and Marianne Abadie of Carrollton, Texas, shared their success story, which is one of thousands that witness to natural child spacing’s beneficial impact on marriage. Tony said that as they prepared for marriage in the Catholic Church, they were never informed that the Church prohibits contraception, so once they were married, they started using the pill. When they learned the truth, they were shocked.

When a friend told Marianne that contraception was against Church teaching, she reconsidered. And when she shared the news with her husband, she didn’t get an enthusiastic response. “I was not thrilled at first,” recalled Tony. “Yet, I knew that if she had her mind made up, I wasn’t going to be able to convince her otherwise.”

Even after learning the truth, it took some time for them to embrace the Church’s teaching completely. “We went to an initial class, got the rules and went home,” said Tony. “I got excited by the science of it and we decided to try it.”

The Abadies began using natural spacing methods in late 2005. Tony said that he could see positive relationship changes soon after. “Our communication improved and we stopped fighting about sex,” said Tony. “I didn’t have any respect for her fertility. Now, if she’s fertile and we’re not trying to conceive, I’m able to discipline myself during days of abstinence.” The couple also began talking about having more children. Currently, they have two boys.

In May 2007, Tony and Marianne began teaching the BOM through their parish. The deacon has now made instruction on the natural spacing of children mandatory for couples desiring to marry, and the Abadies have taught approximately 100 couples so far.

A panel of eight doctors answered questions and spoke about the importance of reaching out to the broader medical community with the positive message of naturally spacing children.

Dr. Clint Leonard of Phoenix, Arizona, noted that it is perhaps easier to reach medical students and residents while they are in training. “They’re there looking over your shoulder. They can’t help but notice how you practice. The major hurdle,” he said, “from my politically correct generation is the fear of not giving someone something they want.”

Dr. Mary Davenport, an obstetrician-gynecologist from El Sobrante, California, who formerly prescribed contraception and committed abortions before converting to a 100-percent pro-life practice, spoke about the lack of support in the medical field. “There are only a handful of obgyn’s in the country who won’t provide contraception,” she said.

Dr. Mary Martin, an ob-gyn in Oklahoma City, Oklahoma, spoke of leading by example: “The emergency room called about another physician’s patient who was having a problem with her IUD [intrauterine device],” she said. “They thought that it was coming out. I told them to remove it. Here’s a case where we now have a teachable moment.”

“When I was on call and patients who were delivering via [Caesarean] section wanted tubal ligations, I wouldn’t perform them,” said Dr. Martin. “During that time when the mother is overcome with emotion for the baby, I would explain that I was a faithful Catholic. Half a dozen times this came up, and my partners supported me. One of them eventually converted to Catholicism.”

The message doesn’t need to come only from those in the medical field. “The Church is in need of priests who will preach about the family and NFP,” said Dr. Michael Moloney, a family physician who is currently studying for the seminary in Fort Worth, Texas.

With regard to the health care “reform” debate, Dr. Hemstad commented, “If there’s anything we need to fight for, it’s the conscience-protection component. That’s the only way we can come back and practice health care from our Catholic beliefs.”

Perhaps the most exciting event during the conference was the dedication, blessing and tour of the new Billings Ovulation Center at St. Anthony Hospital in Oklahoma City. The center was dedicated and blessed by Father McCaffrey. Dr. Martin, who spearheaded this project, was obviously thrilled. “We’re providing obstetrics, gynecology and fertility consistent with the Church’s teaching, all under the umbrella of a faithful Catholic teaching hospital,” she said. The center includes six examination rooms, a waiting room and four physician offices.

“After a conference in May 2008, I realized it would be great if physicians had a place where they could go to learn this,” Dr. Martin explained. “We can accommodate residents and nursing students. We have one of the few ovarian fertility monitors in the country. As an accredited teaching facility, I’m hoping that we can create a curriculum that could be introduced into medical and nursing schools.”

She has already seen an encouraging response: “This has really taken off with the family practice residents. Virtually all of them are already NFP. They’re becoming enculturated in this. We’re attracting physicians who want to practice without using contraceptives.”

“We’ve embarked on ‘mission impossible,’” said Father Habiger, who spoke about the importance of teaching the truth about human sexuality. “Our success isn’t measured by the world but by how God sees it. There will be tremendous opposition to what we are doing, because our work supports marriage, the family and life.”

“Dr. Martin’s new center will have a tremendous impact on how doctors practice reproductive medicine,” said Ek. “She’s completely removing the birth control pill from the picture. Because of her new center, medical students will see female fertility as a natural function of the human body.”

For more information on the Billings ovulation method of naturally spacing children and the BillingsOvulation Method Association-USA, go to boma-usa.org.