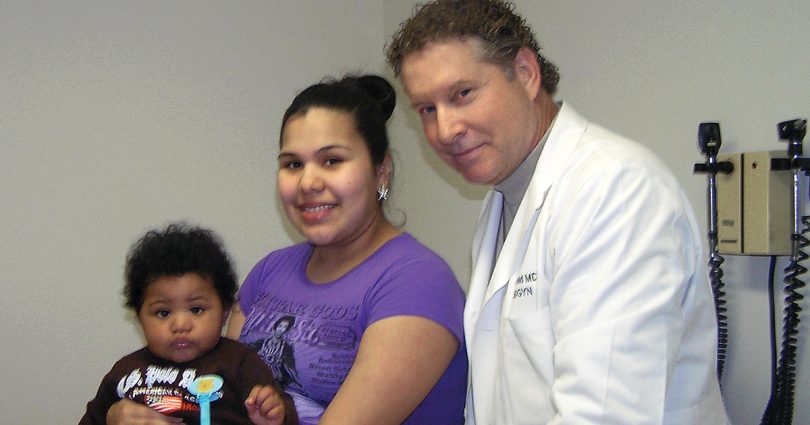 Standing among his fellow classmates of Texas A&M University’s medical school in 1981, Dr. Tim Field never imagined where his life would lead some 25 years later. He entered the world of medicine with a desire to help others. After running a successful obstetrics and gynecology practice for over two decades, Dr. Field made a decision that would forever change the way he practiced medicine: He quit prescribing contraceptives.

Following his graduation from medical school, Dr. Field spent four years training in ob-gyn at Scott & White Hospital in Temple, Texas. He then worked in various hospitals before opening a solo practice in Jacksonville, Texas, in 1988. Twenty years went by, and he felt a nudge. “While I loved my job and the path I had chosen, I was realizing more and more that I needed to make a change in the way I practiced medicine,” he said. “It seemed that abortion was the easy question: It’s always wrong. As a physician, the issue of artificial contraception was much more challenging for me.”

A devout Catholic, Dr. Field lists both his faith and family as factors in his decision, giving much of the credit to his wife of 33 years, who has successfully managed both their home and his medical office. “Lisa is an incredibly faithful and spiritual woman,” he observed. “She never pushed, but always led through her loving example … her prayer was for my professional life to work in coordination with my personal faith. How powerful the influence of the Holy Spirit can be through our own spouse! Her gentle influence helped me to better understand and appreciate the beauty behind the Church’s teachings on artificial contraception.”

“My children [Marilisa, Tanner, Layton and Barrett] and their families were very influential in my decision,” Dr. Field reflected, no doubt thinking of his six beautiful grandchildren, all conceived through natural methods of spacing children. “They understand and practice that which I knew, but never allowed myself to be open to. Watching each of them live out their faith really made me stop and think.”

An experience that helped to solidify Dr. Field’s move away from the contraceptive mentality occurred during a 2007 trip to the Shrine of the Most Blessed Sacrament in Hanceville, Alabama, with his wife and mother-in-law. After visiting the holy site established by Mother Angelica, whom he refers to as a “modern-day saint,” he experienced peace and certainty about his decision. “The priest gave a beautiful homily about how God wants us to be open with our lives to what He wants us to do,” he recalled. “I felt as if that message was sent directly to me. I shared my thoughts with Lisa, who was immediately filled with excitement. She said she knew it would happen sooner or later.”

On October 31, 2008, the Fields closed the solo practice and moved from the place they had called home for so long. In God’s perfect timing, the Fields soon learned that St. Joseph Health System in Bryan, Texas, was looking for an ob-gyn trained in natural family planning. They also learned that Rev. David Konderla, pastor of the vibrant St. Mary’s Catholic Center at nearby Texas A&M University, was interested in opening an NFP training center at the university parish. “It could not have been a more perfect combination of events,” said Dr. Field. “This time in our lives is a great example of how God opens the doors for us, but we have to make the choice to walk through them.”

Dr. Field began to study the Creighton Model FertilityCare System, which relies upon “standardized observation and charting of biological markers that are essential to a woman’s health and fertility.” Under the direction of Dr. Thomas Hilgers at Creighton University in Omaha, Nebraska, he became certified as a Creighton Model medical technician and consultant, and now uses the method to help couples. “NFP methods are natural, healthy and wholesome,” he explained. “They are based on the idea that procreation is a joint decision by the couple. Artificial contra ception has a way of distancing couples and ultimately objectifying women by stripping away responsibility from the man. NFP unites us by enhancing our natural Godgiven gifts as men and women.”

Going against the establishment

Helping those in the medical community to view contraception as a pro-life concern can be quite a challenge. “That which physicians have been taught as the standard, where contraception is concerned, really goes against our Christian principles,” said Dr. Field. “Also, there is a mounting pile of evidence showing that artificial hormones [such as in contraceptives] result in a higher rate of breast cancer, liver problems and heart problems. But it is still a challenge to go up against the contraceptive norm in modern medicine. We in the medical profession need to wake up, and see that we can’t keep promoting these products and pretending that there are no downsides.”

While Dr. Field describes the process for physicians wanting to practice contraceptive-free as an “uphill battle,” he does see hope in younger doctors learning NFP. He has come into contact with many young physicians, through the Creighton University program, who recognize that the artificial techniques are not as healthy as we are led to believe. “Even if it is not a choice of faith, one can use NFP methods because they are a healthy alternative to introducing artificial and risky medications into the body,” he continued.

Looking to the future

Despite the whirlwind of changes that have occurred in Dr. Field’s life over the past few years, a plan to take a break is nowhere in sight. Along with his work in the rural health care clinics in the Bryan/College Station area, he is now focused on the newly established FertilityCare Center at St. Mary’s. The center is certified by the FertilityCare Centers of America, an extension of Dr. Hilgers’ work in Omaha, and currently serves the community by promoting and teaching the Creighton Model method. Dr. Field serves as the center’s medical consultant, and works with couples and individuals who want to practice the method. “The FertilityCare Center at St. Mary’s is in its infancy, but we are certain that there will be a boom of activity here very soon,” he said. “It is our hope that, with the continued support of the St. Joseph Health Center, St. Mary’s and this great community, the facility here will be duplicated across the country, especially near college campuses.”

Dr. Field reported that, within the next year, the group aims to establish a dedicated space on the grounds of St. Mary’s to house the program. Such a facility would accommodate the training sessions, classes and, eventually, a clinic for fertility care patients. “I am so excited to be a part of such a special project!” he exclaimed. “God has blessed me tremendously with faith, family and a wonderful profession. I am happy to help spread His love through my work and to give back for all the gifts He has given to me.”

A married couple seeking the will of God make a genuine commitment to always include His will in their marital relations. Natural family planning is God’s plan for naturally spacing children that respects a female’s natural rhythmic cycle. Pope John Paul II wrote in Familiaris Consortio (section 32),

The choice of the natural rhythms involves accepting the cycle of the … woman, and thereby accepting dialogue, reciprocal respect, shared responsibility and self-control. … In this way sexuality is respected and promoted in its truly and fully human dimension and is never “used” as an “object.”

Please note there are distinct differences between artificial methods of contraception and the occasions when, for just reasons, a couple may ask God to postpone conception. American Life League does not ever endorse any method of family planning designed to intentionally avoid the meaning of the conjugal act: openness to the possibility of children and the unitive love between spouses.