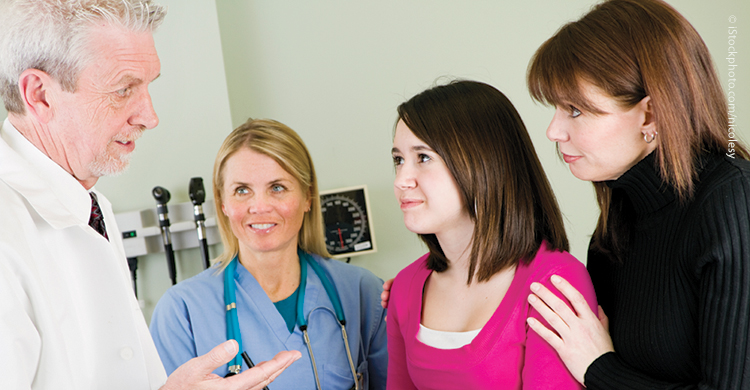 In this context, it should come as little surprise that many parents and their young daughters will encounter a physician who recommends the use of hormonal contraception. A doctor typically makes this recommendation for one of two reasons. The first is that the doctor believes most adolescent girls will become sexually active in middle school or, at the latest, in high school, and that teen pregnancy should be prevented. (Of course, any parents who think their daughter will save sex for marriage are in complete denial!) The second reason a doctor prescribes hormonal contraception for an adolescent girl is to treat a gynecologic problem such as heavy, irregular, or painful periods.

In the first instance, the young girl and her parent are presented with a fantastic opportunity to witness to the virtue of chastity—which most physicians have forgotten their adolescent patients are capable of. In the second instance, parents should know that hormonal contraceptives do nothing to actually treat their daughter’s condition. Rather, they only suppress the natural hormonal changes of the cycle, and at best, mask the underlying problem by merely treating the symptoms. Thus, hormonal contraceptives cannot provide a lasting cure for a disease.

The good news is that there are excellent treatment options available for the gynecologic problems that may arise in adolescent girls. The treatments of NaProTECHNOLOGY (Natural Procreative Technology) respect a young woman’s dignity, as they do not rely on synthetic hormonal suppression, but rather work cooperatively with the menstrual and fertility cycles. Physicians trained in NaProTECHNOLOGY3 work to accurately diagnose the condition’s underlying cause, so that the abnormality—whether anatomical, biological, or hormonal—can be treated effectively in order to promote lasting wellness. By addressing the cause of such issues directly, NaProTECHNOLOGY provides sustained improvements in gynecologic health and procreative potential. Moreover, NaProTECHNOLOGY respects the physical, spiritual, and psychological integrity of each young woman as it treats the whole person, not just the symptoms of a disease.

Dr. Gavin Puthoff is an ob-gyn who is completing a fellowship in Medical and Surgical NaProTECHNOLOGY at the Pope Paul VI Institute for the Study of Human Reproduction in Omaha, Nebraska. After the completion of his fellowship, he plans to start a Center for NaProTECHNOLOGY in St. Louis, Missouri. Dr. Puthoff and his wife have four daughters.