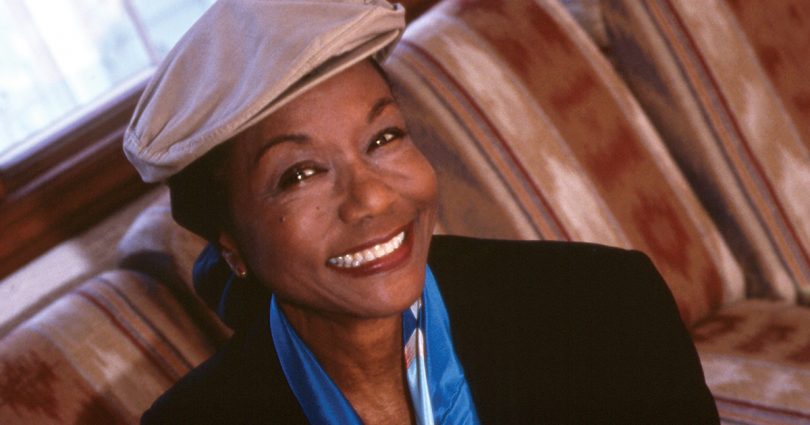 Dr. Jefferson was born on April 4, 1926 to Rev. Millard and Guthrie Jefferson, in the East Texas town of Pittsburg. She grew up during the era of racial segregation, but was undeterred by obstacles such as prejudice and discrimination, and her imprint on history as a trailblazer is undeniable. In 1993, she told an audience, “One can be ashamed if they are going to use history as the excuse for never doing anything in the present or future. I really don’t care that my ancestors came here on slave ships. They got here, and because they got here, this is my home, my native land.”
The family moved to nearby Carthage when Dr. Jefferson was a baby. She graduated in 1943 from what was then known as Carthage Colored High School. In 1951, she became Harvard Medical School’s first black female graduate, having already earned a master’s degree from Tufts University. As if that were not enough, she became the first female surgical intern at the prestigious Boston City Hospital, the first female doctor at the former Boston University Medical Center and the first female admitted into the Boston Surgical Society. She was also an assistant clinical professor of surgery at Boston University’s medical school.
But that was just the beginning of Dr. Jefferson’s pioneering feats. She was one of the American pro-life movement’s architects and helped to found the National Right to Life Committee in the early 1970s, and I was fortunate enough to work directly for her for three years, when she served as its president from 1975 to 1978. Had I not, it’s doubtful that I would have persisted with the sharpened focus on truth that has today become the hallmark of American Life League.
When Dr. Jefferson left the presidency of National Right to Life, I departed as well. I knew instinctively that her inspired leadership had been a great blessing to me that could not be repeated. She went on to found the Right to Life Crusade and, through that organization, spoke on campuses and in public gatherings for years. I went on to found American Life League in 1979, and our friendship continued without missing a beat.

For her achievements in medicine and dedication to genuine social justice, Dr. Jefferson was awarded 28 honorary degrees from colleges and universities. She once told me, “I am proud of my accomplishments, Judie, but I have achieved these things as an American, and that is that.”

In 2000, Dr. Jefferson agreed to serve on American Life League’s Board of Directors. Last year, she visited our office and presented an illuminating history of the pro-life movement to our staff, a rare treat when one considers that her usual audience numbered in the hundreds, if not thousands.

Hailed as a powerful and poised orator, she learned the art of public speaking as a child at the feet of her father, listening very carefully as he gave sermons at Saint Beulah Christian Methodist Episcopal Church every Sunday morning. She was petite in size and diminutive in stature, but overpowered a room when she entered it. And her smile could captivate even the grouchiest of people.

Her most indelible impression was made on the young people to whom she spoke and with whom she debated on countless occasions during the 45 years I knew her. Even those who disagreed with her position were spellbound by her articulate arguments.

I particularly recall her address to a National Right to Life convention in the late 1970s, held at Faneuil Hall in Boston. The hall was packed and the standing ovations too numerous to count. She rallied the troops, as she always did, with intelligent and compelling words made all the more impressive and inspiring by her delivery. She was, to my mind, the greatest public speaker the prolife movement has ever known.

In yet another first, Dr. Jefferson became the first woman to receive the Lantern Award for Patriotism from the Massachusetts State Council of the Knights of Columbus. Her love for her country was evident in everything she did.

In his online tribute to Dr. Jefferson, Mark Pickup, a wellknown pro-life activist, writer and public speaker, quoted from one of her thousands of articles:

We come together from all parts of our land … We come rich and poor, proud and plain, religious and agnostic, politically committed and independent. … The right-to life cause is not the concern of only a special few, but it should be the cause of all those who care about fairness and justice, love and compassion and liberty with law.

Dr. Jefferson testified before Congress on several occasions, calling for legal protection for the preborn child. In its October 18 obituary, the New York Times quoted from her 1981 testimony in support of a bill that would have allowed states to prosecute abortion as murder: “With the obstetrician and mother becoming the worst enemy of the child and the pediatrician becoming the assassin for the family, the state must be enabled to protect the life of the child, born and unborn.”

In an interview published in 2003 by the American Feminist, she declared, “I became a physician in order to help save lives… and I am not willing to stand aside and allow this concept of expendable human lives to turn this great land of ours into just another exclusive reservation where only the perfect, the privileged, and the planned have the right to live.”

Not a day went by without her sounding the call to stop abortion addressing the most egregious human rights violation in the history of mankind and doing all that was humanly possible to expose it as a crime against humanity. She often told me that she prayed daily for God to give her the strength to move forward and ignite the spark of zealous indignation among the people of this nation so that they would carry the banner for the babies until victory was achieved.

Dr. Jefferson was driven by her faith in the goodness of the American people, her confidence that, one day, the majority would see the truth and her undying faith in God. She never wavered from the course she knew the Lord had set for her.

We’ll miss Mildred Fay Jefferson, M.D.–that’s the way she always referred to herself when she left messages on my cell phone–in so many ways that one can’t even enumerate them without tears.

Dr. Jefferson inspired me, educated me, and literally changed my life and the lives of my husband and children with her warmth, her unquenchable zest for life and her very presence in our home. She became a member of our family in more ways than one. Imagine, if you will, Dr. Jefferson standing in my daughter’s living room, plastic cap gun in hand, playing “cowboys and Indians” with my grandsons. She did, and they loved it!

She made history and inspired an entire generation of pro-life leaders. As tributes to her life and legacy continue to pour in, it’s clear that she made a lasting impression on so many people that only God knows how many hearts she touched and, most importantly, how many babies are alive today because of her incredible dedication and boundless energy.

All of Dr. Jefferson’s 84 years of life were a testimony to the vital need to educate our fellow human beings, to show them the child’s humanity prior to birth and focus on the indisputable fact that each preborn baby without exception is a member of the human family.

Someone once said that Dr. Jefferson carried the flame unwaveringly, with a heart of courage, stamina and love, so we must make sure her memory never dies. At American Life League, we plan to continue carrying the torch she lit by completing our Culture of Life Curriculum for Catholic high schools and dedicating it to her.