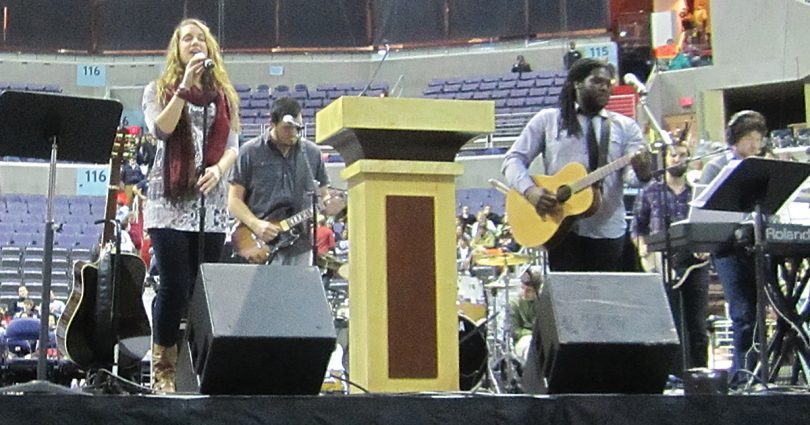 As a contestant on American Idol in 2010, Maddy Curtis, then 16 years old, advanced as far as the show’s second round of eliminations in Hollywood. Yet, it was her pro-life message that really struck a chord. “Maddy and I clearly believe that the whole American Idol experience was God-directed. You couldn’t plan to capture five minutes of TV time for a pro-life message. Only God can do that,” said Barbara Curtis, her mother.

That message centers on life in the midst of 12 siblings, four of whom have Down syndrome. Jonathan, a biological brother, is a year older than Maddy, and her three younger brothers—Jesse, Daniel, and Justin—were adopted.

In an interview that aired along with her American Idol audition, Maddy stated, “I think some people are a little skeptical of Down syndrome. [But] those boys bring out the best in each and every person they meet. They see the world in colors, and we need to see the world that way.”

“She was born 54 weeks after Jonathan, our first son with Down syndrome—who spent the first 18 months of his life in and out of the hospital, and almost died from pneumonia shortly after Maddy was born,” Barbara recalled. “Then followed the three adopted brothers with Down syndrome. So she lived a very unspoiled life.” Her mom also described her as very serious about her future and always working hard to do her best. She added, “Her dad says that what is most memorable is that, no matter what, when you looked her way, she flashed the biggest, most radiant smile.”

Throughout her school years, Maddy has performed in school, community, and professional theater productions, including over 20 musicals. She has had leading roles in The Wizard of Oz, Annie, Fiddler on the Roof, Sweeney Todd, Anything Goes, and Les Miserables.

Maddy’s brother Jonathan has also been heavily involved in theater. “Jonny was always in the ensemble,” said Barbara. “He earned his own way—and appeared in some shows she wasn’t in. Directors considered him an asset, as his enthusiasm and lack of typical teenage self-consciousness set the tone for everyone to be more relaxed and more adventuresome.” In fact, Jonathan has appeared in over 20 musicals presented by public schools and community theater organizations.

In 2008, after 20 years in the Evangelical Christian community, Barbara and her husband, Tripp, along with Maddy (then 15) and their four sons with Down syndrome—entered the Catholic Church.

“As a convert to the Catholic faith, I adore the love and respect for human life in most of my fellow Christians,” Maddy said emphatically. “My career aspirations, oddly enough, are to become an opera singer. Even then, I will be exclaiming the love for life I have and the love I have for Christ through the Immaculate Heart of Mary.”

Maddy said her family has affected her life in wonderful ways:

Look at us, a family of 12, with four children with Down syndrome. My family inspires me. They inspire me to be pro-life; they inspire me to be a better person. … They have made me more patient and understanding, and have helped me see the world in a much brighter and fuller way. Sure, there have been difficulties at times; it’s not always hunky-dory, but that’s what makes it real and mean more.

The response to Maddy’s pro-life message on American Idol has been mostly positive. “Of course, there will always be those who are disgusted with the pro-life message, but all in all, people are moved, and see the beauty and joy of my brothers with Down syndrome,” she commented.

Because her TV appearance generated many requests for appearances at pro-life events, Maddy has been able to continue delivering the pro-life message. She has spoken and sung at pro-life fundraising events in Richmond, Pittsburgh, Boston, and Las Vegas. And in 2011, she participated in the huge youth event held at Washington, DC’s Verizon Center just before the annual March for Life. “Singing and speaking at the Mass before the March for Life at the Verizon Center was an extraordinary event,” she said. “I felt God’s presence with me, and He gave me the words to say and the peace to sing for His glory. It meant so much to me that I could tell all of the importance of life.”

Maddy is now studying for a bachelor of music in vocal performance, with a focus on opera, at Catholic University in Washington, DC. She is also a member of the university’s Students for Life group and marched with fellow members at this year’s March for Life.

Due to the demands of her academic regimen, Maddy’s schedule of outside pro-life activities has not been as intense as it was in the first 15 months following her American Idol appearance. In fact, although she passed several rounds of American Idol auditions earlier this year, she opted not to participate in “Hollywood Week” (one of the show’s last rounds of competition), deciding it would be a distraction from her studies.

Commenting on her appearances at pro-life events, she said, “I speak a lot about children with Down syndrome and, of course, the terrible tragedy of abortion. I also speak a lot about purity. Lord knows it’s a lost jewel in our society now. But it is a part of the beauty of life.”

When Maddy is not occupied with homework or pro-life speaking engagements, she uses her voice to praise God in church. “I am a cantor, so I sing the hymns and psalms every Sunday. I am a sucker for traditional music in the Church, so that’s what I stick to. Contemporary church music is not my forte, to be honest. I find so much joy in singing for the Church. It is such a delight.” Maddy also plays the ukulele and guitar, and composes her own songs.

Mindful that most babies prenatally diagnosed with Down syndrome are aborted, Maddy wants to instill hope and courage in their parents. She stated, “Clearly, a woman who is going to have a child with Down syndrome has been given this blessing by God.” Her advice:

Be excited. Want the child. That is the most important advice, in my opinion. If a child with Down syndrome is born into a family that isn’t as loving or as wanting of the child as if they had had a ‘normal’ baby, there’s a problem. Be content, and love what the Lord has given you. [The baby] should never [seen as] a punishment. … Pray, meditate, and love. All will be well.

Elizabeth Elliott is a freelance writer in Omaha, Nebraska, who majored in music and journalism at Omaha’s Creighton University. For over 20 years, she has played flute for church-related events. She can be heard on the recordings Days of Yesteryear by Patrick J. Cullen and Spirit and Life by Tony Ward.