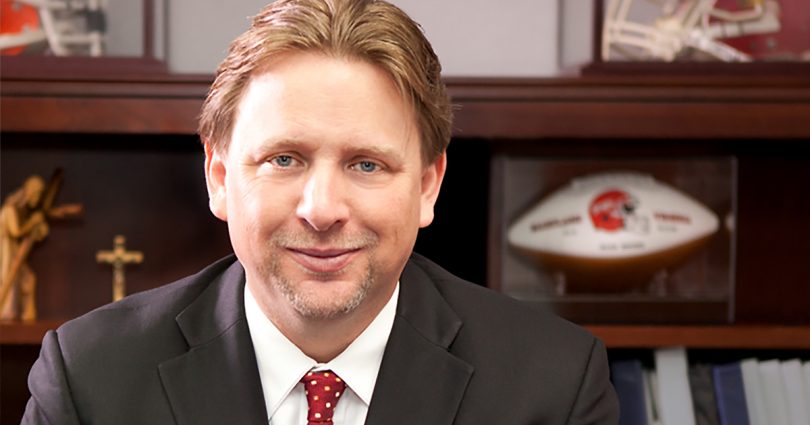 That divine directive has certainly been taken to heart by Hugh Richard Brown III, the eldest son of Paul Brown and Judie Brown, cofounder and president of American Life League. Hugh was born in Seattle, Washington, in 1968, the eldest of Paul and Judie Brown’s three children. When he was still very young, Judie became involved in the pro-life movement. By the time Hugh was seven, she told Paul the family needed to be closer to Washington, DC, in order to be effective.

Paul said it would never happen, but God had different plans: Six months later, Paul, Judie, Hugh, and his two sisters, Catherine and Christina, found themselves living in Woodbridge, Virginia—a suburb of the nation’s capital. Hugh jokes, “Be careful what you tell Judie she can’t do; she has friends in high places!” And in 1979, Judie cofounded American Life League —an endeavor that would dramatically and forever change the life of the Brown family.

At age 14, Hugh faced the challenge of transitioning from a small Catholic grade school to a large public high school in Stafford, Virginia, where the ALL office is located. On the first day of school, when Hugh walked into the cafeteria, a friendly young woman thought he looked a little lost and asked if he needed help. “I remember that moment vividly. Her beauty, inside and out, overwhelmed me.”

Little did he know he had just met his future wife, Ann! “A full year went by before I saw her again,” Hugh continued. “We sat at the same lunch table, and the great part of the story is, she eventually asked me if I wanted to go see a movie. I was a shy kid and I told her, ‘I’m gonna have to ask my mom.’” As the big first-date night approached, Ann came over to meet his family. Imagine Hugh’s shock when his mother exclaimed, “Oh, its Ann!” Mrs. Brown had recently hired the 16-year-old, through a program sponsored by the high school, as an assistant to American Life League’s director of research. God had a plan.

One of the things that make Hugh a great role model for young people is the fact that he acknowledges his faults. He admits that it took being temporarily suspended, for academic reasons, from the University of Maryland’s football team to teach him humility. And he openly confesses that, “being a former linebacker [the position he played on his football team], I have to not be overly aggressive.”

Establishing a family and career

Hugh and Ann married in 1992 and now have five children. Their youngest child is in elementary school, and their eldest is in college. Also in 1992, Hugh went to work with his father at AKA Printing and Mailing, the printing firm founded by Paul in 1983. “We started small, with American Life League being one of our only clients,” Hugh explained. Paul challenged him to work hard and he did, taking over the operations in 1996.

Over the years, AKA has gained many clients and encountered some challenges. For instance, there were clients that didn’t like AKA’s policy of consistently abiding by pro-life and pro-family principles. “Some of our clients have fired us for what we believe and what we stand for—even some of our Catholic clients,” Hugh revealed. “We’ve had loans called by banks, audits by the IRS, and horribly false and hurtful things said about us, all because of what we believe. In our suffering, though, we have learned to yearn for Christ, and He has allowed us to become stronger through it all.” He is proud of the family business and remains undaunted: “Our mission is spreading the gospel of Christ throughout the world. If you do good works, we want to help you. If we are going to suffer in this life, let it be because we serve Christ.”

Hugh’s eldest child, Emily, was his inspiration for working, along with his wife and others, to establish Fredericksburg’s Saint Michael the Archangel High School (SMHS), to ensure that she and other students could continue to receive a quality Catholic education beyond middle school. (See the March-April 2011 issue of Celebrate Life and the SMHS column in this issue.)

In 2006, the year the school opened, a fellow board of trustees member asked Hugh if they would celebrate the feast day of Saint Michael the Archangel. “When is it?” Hugh asked. “September 29,” the fellow board member replied. Imagine Hugh’s surprise when he realized that Emily—the very daughter who had inspired the founding of this school—had been born on this special day! This was a very powerful and humbling confirmation that SMHS, whose mission includes training young men and women to create a culture of life, was indeed being led by the Holy Spirit.

Now in its eighth year, the school has grown rapidly in its size, scope of activity, and commitment to instilling the Catholic faith. SMHS students have participated in the March for Life and 40 Days for Life, and have performed volunteer work for the local community. Many graduates have gone on to attend top-ranking colleges and universities, and this year’s incoming freshman class will be the largest one yet. “We are raising and training the next generation of pro-life leaders and Catholic leaders—men and women who will not flinch in the face of our eroding culture. Nothing is more important,” Hugh believes.

Establishing a culture of life

As if his involvement in his business and the school weren’t enough, Hugh’s involvement in American Life League dramatically increased about four years ago, when his mother’s health took a turn for the worse. “Mom needed help,” he said. And without hesitation, Hugh stepped in. How could he do otherwise? “With the sacrifices she has made and the lives she has saved, I firmly believe that she will one day be the patron saint of the preborn,” he said. “She is my heroine; she is what a Catholic should be, and she is what I aspire to be.”

Hugh is now a member of ALL’s board of directors. He is deeply involved in fundraising and asset management, and helps advise and assist his mother in anything she asks of him. “If I think it is what God wants us to do, we take the leap. I learned that from my mom and dad,” he acknowledged. “But if my mom tells me she prayed about something and says, ‘This is what we are going to do,’ I trust her discernment without hesitation, and if I can help her, I will.”

When asked about the future of the pro-life movement, Hugh had plenty to say. With regard to Pope Francis’ role, he commented,

We have to believe that the pope is Christ’s vicar here on earth. We have to believe that the Holy Spirit will work through him to convert and save souls. . . . He needs our prayers. We have to trust that he will follow the will of the Holy Spirit. He certainly has the ability to impact the fight for life. . . . The bishops and cardinals could end abortion in America if they actually held politicians responsible for their sin—the horror of supporting the killing of children. Abortion would end if bishops held Catholics accountable.

Where would that leave ALL? Hugh’s hope and prayer is that ALL won’t be necessary in the future. Can we get there? He certainly believes we can, because “we walk by faith and not by sight. We war against principalities. We need the help of heaven to win. That is why we have to seek the intercession of the Blessed Mother and Saint Michael; we need their help,” he said.

In the meantime, Hugh suggests that we work more consistently with the next generation. They must be trained and educated to persuade those seeking abortion to choose life instead. They must be shown how to live a life that is faithful: “Strive to follow the Church’s teachings. Our loving witness is what will convert hearts and lead others to Christ.”

Hugh is encouraged by the recent trend of young professional women being “the face” of the pro-life movement, which he views as “a natural fit.” He went on to say,

Women have the incredible blessing of being mothers. They have the extraordinary ability to give life. The joy of motherhood is beyond compare. The love of a mother is what defines humanity. If we can get a woman who is struggling and who is considering having an abortion to realize that she is already a mother, that beautiful epiphany will save a life.

Hugh was thinking most specifically of former Planned Parenthood manager Abby Johnson (see Celebrate Life, Spring 2013). Abby saw firsthand the horrors of Planned Parenthood and had the strength to leave. Now she is a passionate advocate for preborn babies. To Hugh, her story “is like a Saint Paul conversion story.”

In all that they do, it’s clear that Hugh and his family allow God to work through them—and that they lean on Him for strength. When they stop to think about all the challenges they have faced along the way, they realize that “someone always has it far worse; we are truly blessed, and we can learn to seek God even more in the midst of trial if we can simply see beyond ourselves,” Hugh observed.

Prayer plays a major role in Hugh’s life. In 1999, when an accident left a friend and former college teammate paralyzed, and struggling with depression and suicidal temptations, Hugh suggested they pray. Since that time, the two men have called each other almost every night, and they pray. In the midst of that horrible accident years ago, a man had his body broken, but his spirit was found. And Hugh related another story revealing the power of prayer:

When Ann became pregnant with our third child, at about 20 weeks, she developed pre-eclampsia and hyper-toxemia, as she had before. We heard about a healing Mass at Saint Patrick Church [in Fredericksburg, Virginia]. At the end of the Mass, we were steered toward praying with an older couple, and we learned they had experienced the same thing we did, only years earlier. It was very emotional, and we prayed for healing. The very next morning, Ann was up early, with no morning sickness for the first time in two months, and she was actually vacuuming the house. It was very surprising, and when I asked her what she was doing, she said she had never felt better. At her next doctor visit, we learned that the pre-eclampsia was gone. Ann’s doctor called her “my miracle patient.” All of her subsequent pregnancies were also free of pre-eclampsia.

Hugh Brown has led a life dedicated to God, family, and the culture of life. He offers the following words to fortify us all in the fight to build a culture of life:

People know abortion is wrong. The truth is written onto every person’s heart. Whether they accept or reject it is their choice, but that doesn’t change the truth that life begins at the first moment of their biological development. It requires fortitude to stand up for Christ, to stand for the truth. Many times, that isn’t easy. Sadly, today you can’t stand up for what is right without being considered by some as a bigot or a hater. Such attempted intimidation is a weapon of the enemy; it’s a lie of the devil meant to make you fearful to express your beliefs. Have no fear. Christ will never leave you or forsake you. You can change the world through the strength of your faith in Christ; you just have to believe that.

Jessica Kenney is the former associate editor of Celebrate Life Magazine. She works from home, where she raises two sweet boys with her husband of 12 years, Art, whom she loves very much.