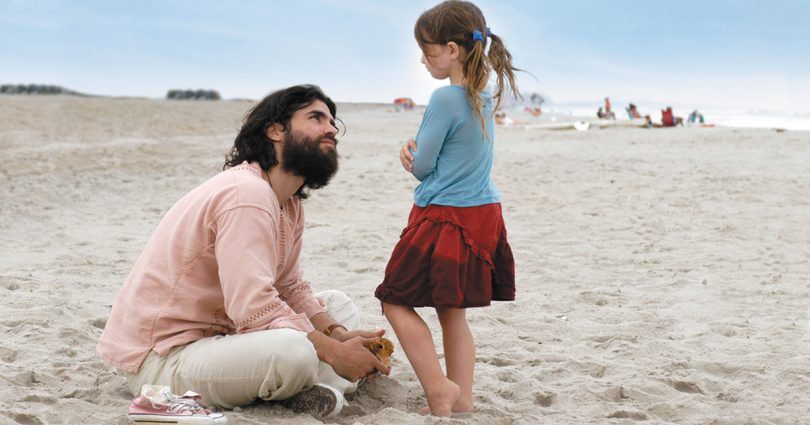 Most movies coming out of Hollywood these days leave an audience completely removed from the characters. Moviegoers walk out of a theater and soon forget the plot—if there was a plot.

Now we look forward to Bella—the beautiful inspiring film that opens around the country this fall. Bella stars Eduardo Verastegui and already it has won scores of awards. At the prerelease screenings that I attended— including one with the toughest crowd of all, college students—Bella got standing ovations.

Yet that’s not the most fascinating part. Behind the scenes of this feature film is a story that may very well send you to a theater when Bella opens in October.1

Eduardo Verastegui’s public life began at the age of 17 when his father, a sugarcane farmer in the Mexican village of Xicotencatl, Tamaulipas, sent him to law school. Señor Verastegui had hopes of his eldest child and only son becoming a lawyer and politician. But after two semesters, Eduardo moved to Mexico City among 22 million people and soon became celebrated as one of Latin America’s most beautiful people; first as a fashion model, next as a singing sensation and then as an actor in telenovelas—Mexican soap operas. As Eduardo likes to say, “In Mexico, actors have two choices: soap operas and soap operas.”

A decade later, Eduardo wanted to go to the next and ultimate level of success for an entertainer—Hollywood. Although within a few years, while preparing for the lead role in Chasing Papi, his role in life began to change.

“I wasn’t happy,” Eduardo said. “I was impatient. I had been all over the world. I had money. I had fame. I had everything I wanted, so I had to ask, ‘How come I feel empty?’ That’s when, through a series of friends, a series of events and through my English teacher—who started questioning a lot of things in my life—I just realized many things. She’s the one who changed my life.

“Since the forties and fifties, Latinos have been portrayed in a very negative way. We have been stereotyped as criminals; the drug dealer, the thief, the womanizer— the liar using women as objects. So I realized that, in a way, I was that person,” Eduardo confessed. “And I realized that the reason I wanted to be an actor was superficial; fame, money, power, lifestyle, women— the whole thing. I realized that I was poisoning society. So I went through a change of heart.”

Evidently, Eduardo does nothing half way. He said, “I always had a hunger for truth, but I was surrounded by the wrong influence.” Thus, his change of heart led to a change of mind and soul. After years of not practicing his faith, Eduardo returned to the Catholic Church and embraced the life of integrity in order to help others.

During the humble pilgrimage that eventually led to Bella, Eduardo wondered if he was called to be a priest. He said, “I thought because I have done all these things, I have to dedicate my next 20 years in prayer to cover this.”

Father Juan Rivas became Eduardo’s advisor and helped him to discern his vocation. To Eduardo’s surprise, Father said he should use his artistic talents in the City of Angels.

“It was hard in the beginning because I didn’t know anybody and every day I was with myself,” Eduardo explained. “Then, when I approached my management team and told them what I wanted to do, it was hard for me to convince them with my language barrier.”

Eduardo always knew that his work influenced people—maybe millions—but the potential implications didn’t occur to him for years. He recalled playing a drug addict on TV and said that the show ended positively with the character getting over his addiction. One day, however, Eduardo met a fan who said, “You know, I started doing Ecstasy because of your show!” That hit Eduardo hard. The young man had seen only a promo for the TV show, but it changed his life. Therefore, Eduardo decided, “I have to be very careful what I do. Everything you do, whether you like it or not, affects how people think, how they live, how they vote, everything. There is nothing more powerful than art. Plato said if you want to govern a nation and you have to choose between art and politics, choose art.”

When I asked Eduardo to guide young artists on the limits of compromise, he was absolutely clear. He said, “I won’t do anything that will offend God. Period.

“When you kill somebody in the movies, you’re not killing anyone. But when you kiss someone, it’s really a kiss,” Eduardo stressed. “In sex scenes, you’re really half naked. So I would recommend that people be careful, because you are working with fire and you’re gonna get burned. Don’t risk yourself for some role. I know because I did it. And I’m telling you, 12 years of that was nothing but emptiness, pain and suffering.” Eduardo described sex scenes as what they are: “legal adultery.” And because a kiss is sacred, he vows to kiss no woman unless she’s his wife.

“Every single person in Hollywood, including hardcore Catholics, told me I wouldn’t work,” Eduardo admitted. “So if changing my path to follow Christ means that I will never work, thanks be to God. I’m free, because you know what? I wasn’t born to be a movie star. I was born to be a saint, just like you. And this is not going to get in my way. Or God will make it happen in a way that I don’t have to compromise.”

In order to control his acting roles, Eduardo had to become a producer.

In 2003, he went home to Mexico for Christmas and stopped at his friend Juan Manuel Monteverde’s restaurant. “He thought I was the same crazy Latino actor,” said Eduardo.

“When I started telling him that things have changed in my life— hey, this is what I want to do with my life—he said, ‘You’re talking like my brother Alejandro.’” Eduardo hadn’t seen Alejandro since he was a boy. By 2003, Alejandro Monteverde was an award-winning independent filmmaker based in Austin, Texas and he too was home, so he came right over to meet Eduardo. “When I met Alejandro, I knew that not only was he an amazing talent—a genius—but he had integrity. As an actor and a producer, I needed writers and a director,” said Eduardo. Afterwards, the two became close friends over the phone and, at first, Alejandro said two things: “I will never marry an actress and I will never move to L.A.” Before long, however, Alejandro was moving to Los Angeles and on that drive, the Bella story came to him as he thought about the real lives of his dear friends. Alejandro also married actress Ali Landry, so Eduardo laughed and said, “Never say never.”

In 2004, Eduardo was spotted at daily Mass by Leo Severino, head of business affairs for 20th Century Fox. Leo said, “Twenty minutes after Mass, I saw this guy praying at the Sacred Heart of Jesus and I almost started crying. He had one hand on the Sacred Heart and his head bowed in prayer. And I thought to myself,” Leo laughed, “either this guy’s got incredible faith or something’s wrong with him. Turns out it was both.”

“By that time,” said Eduardo, “I was completely broke. My family thought I was crazy. They were really worried and said, ‘Hey, you have to make a living.’” Crazy or not, Leo taught and supported Eduardo, then quit his job and became Eduardo’s lawyer and manager. After all, as the son of Colombian immigrants, Leo speaks Español. Then “the three amigos”—Eduardo, Alejandro and Leo—founded Metanoia Films, but the question was, how would they finance Bella?

Suddenly in November 2004, Father Rivas called from Rome announcing that he had a ticket for Eduardo to meet Pope John Paul II, so Leo and Eduardo went. Upon meeting the Holy Father, Eduardo was overcome but asked him to pray for the Metanoia mission—and of course nothing is more romantic than providence.

Two weeks after Eduardo was blessed by the actor/playwright pope, entrepreneur Sean Wolfington was searching for film projects in L.A. When someone urged him to meet Eduardo, Sean refused. Next meeting, someone else suggested Eduardo. When a third person recommended him, Sean was compelled to meet Eduardo that evening—only to find Eduardo’s life story and Bella irresistible. Thus, Sean and his uncle Eustace Wolfington became investing partners in Metanoia Films and executive producers of the movie. So, as the opening line in Bella goes, “If you want to make God laugh, tell Him your plans.”

In this film, Nina, a single waitress played by Tammy Blanchard, finds out right before going to work that she’s pregnant. At work, Nina gets another shock and it looks like her life is falling apart. Suddenly, however, the unassuming chef José, played by Eduardo Verastegui, comes to her rescue and the adventure begins. After having worked with him day after day, she finds out who this man really is.

Words cannot prepare us for the power of love, so I preface mine by saying that this film transcends all expectations. That’s why songwriters Alejandro Sanz and Jon Foreman, lead singer of Switchfoot, donated music to Metanoia Films.

See Bella. Your eyes will be captivated. Your heart will dance to the music and love the people. You might even smell the food cooking and you certainly will laugh. Bring some tissues though. Like it says on the Bella poster, “One day can change your life forever.”

Since the original print publication of this article, Metanoia Films has agreed to a distribution deal and Bella opens in major U.S. markets on Friday, October 26.