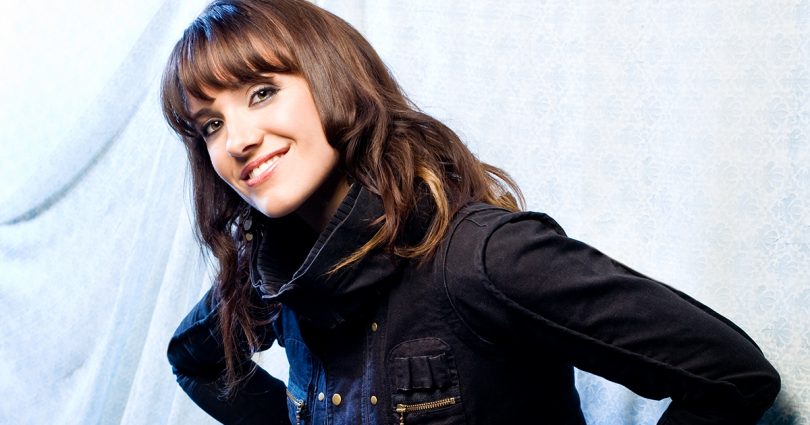 The contemporary Christian music scene is blessed with many talented artists, but singer/songwriter Rebecca St. James stands out for being as much of an evangelist as an artist, addressing issues head-on that even many Christians tiptoe around or avoid altogether and being unafraid to venture into entirely different art forms.

Born in 1977, Rebecca started singing at age 16, in church circles, and speaking about abstinence on behalf of the True Love Waits campaign for teens and college students. “Leaders in the church were inviting me to speak to other teenagers about the importance of purity,” she recalled in a recent interview with Celebrate Life. “There weren’t other teenagers talking about this issue publicly in the church. It became something that I saw the need for. And then I wrote a song about it [“Wait for Me”], and I wrote a couple of books about it [Wait for Me, 2002, and Pure, 2008].” She went on to have a stellar career (see sidebar).

A few years ago, during a brief “sabbatical,” Rebecca discerned that God was calling her to be more involved with faith and family films, “because the content that comes out of Hollywood and the arts is a very powerful medium. I think that a lot of Christians have shied away from being involved in Hollywood because they feel that it’s evil. But I think Christians need to be involved to help shape the content.” So, a couple of years ago, she moved from the Nashville area to the Los Angeles area and enrolled in an acting course. And the abstinence message soon led to the pro-life message, a progression that Rebecca views as very natural.

How can I help?

“What propelled me into the pro-life movement full-force was that I went with a couple of friends to a banquet, a crisis pregnancy center fundraiser, in LA a year and a half ago,” she said. “And I saw a woman who was eight months pregnant . . . who had abortions in the past, and she wept, talking about that. And the pregnancy center told her, ‘We would lovingly support you,’ and that’s what she needed to be able to choose life. She was just glowing with the child within her. It was just such a beautiful picture of Christians loving the broken, seeing Jesus in them and showing the people His love in very practical ways. So we’re talking about saving lives here; this is huge stuff.”

Rebecca was also struck by the center’s tremendous need for support. “I remember saying that night, ‘God, show me what I can do to help.’ A couple of months later, I was asked to audition to play the role of an unmarried pregnant girl. Also, God gave me a song called ‘Little One’ that I wrote from the perspective of my character speaking to her unborn child, and that is in the film.” She wrote it in half an hour after learning she had been given the film’s lead role.

Rebecca had been studying acting for several months when Pure Flix Entertainment, a Christian film studio, asked her to audition to play Sarah Collins in Sarah’s Choice, a well-produced, well-acted movie with a strong pro-life message that was released in November 2009. She prepared for the role by asking the pregnancy center to help her understand the emotions experienced in an unplanned pregnancy. And just before the film was released, two friends revealed their abortion experiences to her, which confirmed for her the importance of the film’s message.

Sarah’s Choice skillfully and realistically illustrates multiple facets of experiencing an unplanned pregnancy, and refutes widespread misperceptions about marriage, family life, and life in general. As Rebecca put it, “With anything truly good in life, there’s going to be sacrifice; there’s going to be pain. Sometimes we buy into this cultural lie that if we are getting life right, then everything is going to be easy.” Among the film’s most memorable lines: “You could have the great stuff. But you can only get it by going through the bad stuff, ‘cause that’s where the great stuff is.”

The film uses an approach similar to that of Charles Dickens’ A Christmas Carol to illustrate the consequences of choices—a device Rebecca described as “very powerful.” She added, “So many women are still feeling pain about their abortions. They just need to know that there is forgiveness. So, the fact that the forgiveness-redemption element was [also] so strong in the film meant a lot to me.”

Getting the word out

Rather than having the typical initial theater run, Sarah’s Choice was immediately available on DVD.  Screenings were hosted in several cities and hundreds of churches have hosted showings. It has been publicized through Christian media outlets and ministries, and marketed through Christian media vendors. Starting this summer, it will also be distributed through mainstream retailers such as Wal-Mart. In late January, it reached first place in Amazon.com’s Christian DVD rankings.

Rebecca reports, “People have seen the movie and chosen life, we have heard. . . . It is beautiful to hear their stories.”

Rebecca has made a number of media appearances to promote the film, “because if it does well, there will be more films of this kind.” In January, she had several Christian media interviews and spoke out in defense of Focus on the Family’s Tim Tebow ad when the abortion lobby attempted to prevent it from being aired during the Super Bowl.

Rebecca was interviewed on FOX News Channel’s FOX & Friends shortly after the film’s launch and has been featured on FNC’s Hannity three times in the last few months, discussing various topics. At her February appearance, she criticized Planned Parenthood’s attempt to provide graphic sex education to children as young as 10.

Since the fall of 2009, Rebecca has been involved with many fundraising events at pro-life pregnancy centers nationwide. She reports that many are now using Sarah’s Choice for their school outreach programs. Her ongoing work for the centers has been the most rewarding result of her involvement in the film, she explained. “My passion for the pro-life message has just grown and grown and grown, as I have encountered these different pregnancy centers. It’s just beautiful to see their work, and I’ve felt so incredibly fulfilled and energized, coming alongside of what they’re doing and supporting them.”

There was noticeable emotion in Rebecca’s voice as she reflected on Big Abortion’s attack on pregnancy centers:

Pregnancy centers are seen to be troublemakers. People stereotype PCs as being really ungracious or in your face. There is such a wrong perception about what they do, where actually Planned Parenthood has an agenda to … really pitch abortion … On the other hand, the pregnancy centers are saying, “At no cost to you, we want to help you choose life. We want to give you free counseling, free ultrasounds and help to protect you from making a decision that you’ll regret.” It’s absolutely unfathomable to me. It seems like the fever of Satan, that he has allowed PCs to be seen in such a negative way and yet PP is seen positively. It doesn’t make sense. The PCs are giving to clients and ask for nothing, and Planned Parenthood is pitching abortion, which is going to bring so much emotional damage, and take a life and take the girl’s money. And yet, PCs get the bad rap? What has been the most shocking to me, the most appalling, is to see how that lie is perpetuated. So I want to be a part of changing that.

Later, she said, “All the projects that I have coming up, I’m sure—when I’m in control of the content—will have some pro-life content. We’re working on a new album. Hopefully, my song from the movie, “Little One,” will be on it. I just started a new book on dating; I’m sure that the pro-life message will show up in there on some level. I feel like God has given me this passion. Outside of doing fundraising events for pregnancy centers, I also talk about the pro life message. It’s really pretty all-encompassing.”

I want to encourage people to see the beautiful work of pregnancy centers. It’s been fantastic to see that Americans are now more pro-life than pro-abortion, but we still need to pray for a change in people’s hearts. These are exciting days we’re in, and we need to stay encouraged. This is one of my favorite Bible verses: “Therefore, my beloved brothers, be firm, steadfast, always fully devoted to the work of the Lord, knowing that in the Lord your labor is not in vain” (1 Cor. 15:58). And I think that definitely applies to what we’re doing here.