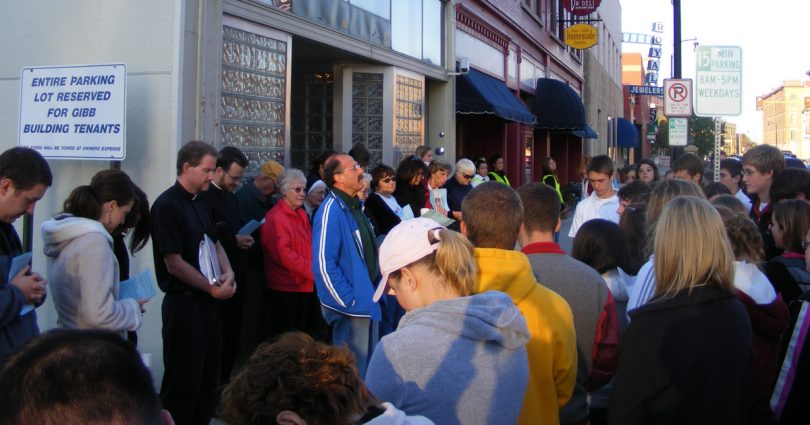 Standing outside the almost-finished 23,000-square-foot Planned Parenthood abortion center in Sarasota, Florida, amid a crowd of more than 300 faithful pro-lifers gathered for the Sarasota 40 Days for Life campaign’s closing rally, David Bereit saw God’s hand at work. “Throughout these 40 days, we have seen the evidence that God has blessed this effort,” he said, “and we can’t wait to see where He will lead us next.” Perhaps it was no coincidence that during that period, Sarasota County denied taxpayer funding for the local Planned Parenthood affiliate for the first time in 10 years.1

As the national campaign director for 40 Days for Life, Bereit represents the more than 30,000 prayer volunteers who participated in the fall 2008 campaign—for many of whom this was their first-ever pro-life activity. This biannual event is now sweeping the nation and is the largest coordinated pro-life outreach in history. “Who would have ever thought that what began as a relatively small, local campaign would have such a profound impact across this nation and beyond?” he wondered aloud.

The success of the original 40 Days campaign, conducted in Bryan/College Station, Texas in the fall of 2004, led to a nationwide phenomenon that has spread from coast to coast and has even reached beyond U.S. borders. A small group of pro-life pioneers with the Coalition for Life—an organization for which Bereit then served as executive director—forged ahead with a plan to bring abortion to the forefront of people’s hearts and minds. The campaign consisted of three components: prayer and fasting, constant vigil and community outreach. That original campaign was tremendously successful in the local community: It activated over 1,000 new pro-life volunteers, reached more than 25,000 households with the pro-life message and cut the number of abortions by 28 percent. “After participating in the first 40 Days for Life campaign, I truly came to understand what amazing things can happen in just 40 days,” said Shawn Carney, executive director of the Coalition for Life and the national 40 Days outreach director. “The response we have seen during 40 Days for Life is a sure sign that faithful people, taking a public stand, can make a difference—for the babies, for the mothers, for our nation.”

The fall 2008 campaign, which kicked off on September 24 and concluded on November 2, was the largest and most successful event to date. Intensive campaigns were conducted in more than 175 communities in 47 states, the District of Columbia, American Samoa and two Canadian provinces. “We know of more than 593 lives that were saved from abortion as a result of the fall campaign,” Bereit reported. “This surpasses the number of turnarounds for all previous 40 Days for Life campaigns combined. The total number of lives saved thus far through 40 Days, from 2004 through today, has now topped 1,000—simply amazing!”

Additionally, during this latest campaign, several people quit their jobs in the abortion industry, resulting in clinics advertising immediate staff openings, and a number of abortion centers were closed on days when abortions are usually performed.

Florida pro-lifers take to the streets

Pat Kennedy led the Jacksonville, Florida 40 Days campaign this fall and was amazed at what happened. Jacksonville pro-lifers kept vigil at their local abortion facility 24 hours a day, seven days a week, for the full 40 days. “We were blessed with a dedicated group of people who really have a heart for the prolife mission,” she commented. After much hard work and numerous cold calls to churches asking for help with the campaign, a faithful group formed to spur the effort along. “We had about 1,500 participants with our sidewalk vigil at the abortion clinic and were regularly joined in prayer by people passing by on the street or coming out of a nearby restaurant or church. People were really drawn to the prayerful presence.”

Kennedy and her crew also enjoyed encouragement from the Diocese of Saint Augustine. “Bishop [Victor] Galeone sought support for the 40 Days campaign by asking the priests, in his weekly pastoral briefing e-mails, to participate in the events,” said Kennedy. “With the 60 Catholic churches in the Diocese of Saint Augustine, as well as the prayer support from other churches, I am certain we had several thousand people praying specifically for the Jacksonville effort.”

The prayers certainly worked, as Kennedy reported that multiple women chose not to go through with their abortions because of the prayer presence. “More than once, prayer volunteers walked abortionminded women down to the local crisis pregnancy center (located just down the street from the abortion clinic) to receive loving care from the counselors,” she said. “And by the grace of God, those babies were saved.” The group also received unsolicited support and encouragement from community members who thanked them for their efforts. “Jacksonville needs to be reminded of what goes on behind the closed doors of an abortion clinic, and 40 Days does just that,” Kennedy said. “The campaign has given us tangible tools to fight this battle for life.”

Another Florida group, Faith Action Counseling & Education for Life, located in West Palm Beach, also joined the fall 40 Days campaign. Susan Pine leads the organization—which is an ALL Associate group—and also led this latest 40 Days campaign. “We first participated in 40 Days in the fall of 2007, and we saw a drop in the total number of abortions both in Palm Beach County and the state of Florida that year,” she reported. “So, when volunteers from the previous campaign came forward offering support and asking F.A.C.E. Life to organize this fall campaign, how could we say no? The Lord had answered our prayers in the previous campaign, and we were confident He would do the same with this one.”

Twice as many pro-lifers participated in the 2008 West Palm Beach 40 Days campaign than had participated in the previous 2007 campaign. “We were excited to have close to 500 people come out to pray in front of the abortion clinic,” said Pine. “Some people made great sacrifices to be there, traveling up to 100 miles to join us in prayer. Most touching were the times when residents from the St. Joseph’s nursing care facility came out to pray. Many of these elderly individuals are wheelchair-bound or barely able to stand; yet they were there, offering their prayers for the voiceless.”

Pine was encouraged by the wide range of prayer volunteers who came out to the clinic. “We had at least 10 priests, as well as deacons and seminarians, come out for this past campaign,” she said. “It was also exciting to see the young people join forces for life. We had homeschoolers giving presentations to youth groups about 40 Days. They were fabulous!” As in Jacksonville, the prayers worked at the West Palm Beach site. The group saw many children saved from abortion and lives forever changed. “For 40 days, not one child left this world without someone loving and praying for him or her,” Pine observed. “God’s protective hand was on them.”

While 40 Days campaigns are focused on a finite time period, they also inspire participants to continue their pro-life activism beyond that time. “People across the nation have proven. . . that they want to work for an end to abortion,” said Bereit, “but far too often, they just don’t know where to start. 40 Days provides that starting point. They take the first step and realize that they can make a difference.”

Chris Slattery and his crew at Expectant Mother Care/EMC FrontLine Pregnancy Centers in the New York City area—also an ALL Associate group—have embraced the 40 Days spirit all year around. “40 Days provides a strong platform to encourage new volunteers to pray and counsel in front of the abortion clinics,” said Slattery, EMC’s president. “Our work doesn’t stop after day 40, however. As we have for many years, we will continue to provide a sustained presence at multiple clinics throughout New York City.”

EMC was the first full-time pregnancy resource center in New York City and now operates 12 centers in the area. Slattery and his staff and volunteers saw tremendous results during the fall campaign. “We know of at least 60 babies that were saved through the efforts here in New York,” he reported. “We also performed over 90 ultrasounds with our full-time mobile clinic during the 40-day time period.”

The group did face significant challenges throughout the campaign, most notably, newly proposed legislation designed to stifle peaceful pro-life activism on the streets of New York City. On the opening day of the fall 40 Days campaign, New York City Council Speaker Christine Quinn announced the Clinic Access Bill, which would create 15-foot buffer zones around “reproductive health care facilities.”2 Despite the bill’s widespread support from proabortion lawmakers, Slattery intends to fight the proposed legislation every step of the way. “With prayer, smart tactics and good people, you can make a profound impact,” he asserted.

Hope for the future

According to Bereit, plans for the spring 2009 national campaign set to begin February 25 (Ash Wednesday, the first day of Lent)—are already underway. “Throughout this entire process we have learned that, with God’s help, lives can be spared from death by abortion,” he observed. “Scripture tells us that ‘with God all things are possible.’ 40 Days has given people a renewed sense of hope and the realization that it is not a matter of ‘if abortion ends,’ but simply a matter of ‘when.’”