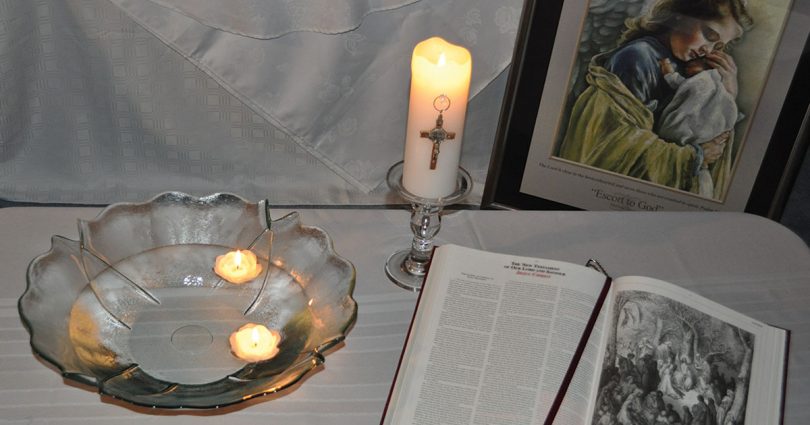 I remember 1973. It was the year that changed everything. I was 15 years old and shy, awkward, and lonely. I longed for the love and attention of a boyfriend. Convinced by worldly wisdom that the ultimate test of my worth was to be loved and desired by a man, my heart broke at every rejection I experienced.

As I stood at the crossroads between childhood and young adulthood, our nation seemed to be at a crossroads as well. The sexual revolution was in full swing, Vatican II had shaken up the Catholic Church of my childhood, the anti-war movement had replaced the patriotism of the post-World War II era, and the Watergate scandal would soon lead to the resignation of the president of the United States. In just a few short decades, it seemed every aspect of our society had been turned upside down.

Living in Massachusetts, not far from Cambridge’s famous Harvard Square (a mecca of hippies and college students), I watched the unfolding events of that era with fascination, desiring nothing more than to be part of the excitement of the times. It was then that I met Don, a 38-year-old man who gave me the attention I so desired. When it became clear that he wanted a sexual relationship, I resisted at first. A mutual friend, Sylvia, advised me to use birth control, but I wasn’t ready to take that step. It wasn’t long, however, before I gave in to his advances, flattered by his attention. I regretted it almost immediately and tried to break it off. He then threatened to tell my parents about us. Fearful that our illicit relationship would be exposed, I continued to see Don—until I realized I was pregnant.

I was frightened and sick. I had no sense of my baby’s presence. When I told Don, he began to harass me with new earnestness. And I was downright terrified when it struck me that having a baby meant a lifelong connection between us—and that I would never escape him. I didn’t realize he probably would have been jailed for statutory rape.

Sylvia stepped in to offer an escape route: abortion, which had just been decriminalized by the US Supreme Court. Then all my worries would be over. There were no abortion facilities in Massachusetts yet, but the local women’s clinic had a smooth operation for sending girls to New York City. Parental consent laws could easily be circumvented, and so an older friend of Sylvia signed as my “guardian” to give me permission. It seemed to be the only way out. I made the appointment and lied to Don, telling him I wasn’t pregnant after all. With that, he finally left me alone. I never saw him again.

Still frightened and sick, I flew to New York on the designated day. A small group of silent, fearful girls from all over the country gathered at the airport, and then we were driven to the abortion facility. One by one, we were taken into a cold, white room for the abortions. A glass of juice and a ride back to the airport ended our medical care. I spent the weekend with Sylvia, never telling my parents what I had done. Believing I could never be forgiven for this terrible sin, I stopped attending Mass.

After that, I promised myself I would never again get involved with a man I didn’t love—and that I would never have another abortion. Yet, a false idea of what love and responsibility was all about had been planted in my mind and began to grow. I believed that if I had just used birth control, it would never have happened.

I pushed all thoughts of the abortion out of my mind. Whenever I came across information about prenatal development and saw the size of a preborn baby at 11 weeks—when I had my abortion—I reassured myself that “it” was not a baby at that stage, but just a clump of cells. That was what I had been told, after all. Somehow I closed my eyes to the part about the beating heart, and the little hands and feet—so tiny, yet so perfectly formed.

Later, I met someone new. Determined to be responsible, I started using birth control. When he turned out to be abusive and promiscuous, I stayed with him anyway—the first of many self-destructive choices. Six years and one suicide attempt later, I finally left him and moved across the country to start a new life.

A year later, I met another man and once again fell “in love.” We soon took the seemingly inevitable step toward intimacy. However, this time the birth control failed. I was pregnant again. And all those years of rationalization kicked in. After the initial shock, I began to think of reasons why I shouldn’t have this baby. It wasn’t the right time. We weren’t ready. It wouldn’t be responsible to go forward in these circumstances. After all, I reasoned, “it” wasn’t a baby yet, was “it”? Just a clump of cells . . .

It took me many years to face the truth about my abortions. I eventually married and had two children, and the realization of what I had done in aborting my first two children could no longer be rationalized away. I knew I needed God’s mercy and forgiveness. In 1995, after more than 20 years away from the Catholic Church, I visited a local parish, where I discovered information on the Divine Mercy promises.1  Through prayer, fasting, and trusting in God’s mercy, I finally found the courage to return to the sacrament of reconciliation, to confess and be forgiven for my sins. That was the beginning of my emergence from the darkness and desolation of post-abortion trauma. But our Lord had more healing in store for me. Much more.

The merciful love of Christ, rediscovered in the Catholic Church, made me yearn for a deeper understanding of my faith. In the years that followed, my marriage was convalidated and my husband entered the Church. I became a certified catechist, eventually returning to college to earn a degree in Christian Tradition. Still, my secret was hidden. I often felt like a fraud in the midst of the holy people in my Church, especially when the subject of abortion came up.

Then, in 2003, I became part of a team offering Rachel’s Vineyard retreats (see sidebar), developed by Theresa Burke, PhD, for healing after abortion. I discovered an even deeper level of healing through that beautiful, God-given experience. I was finally able to acknowledge and grieve the lives of my aborted children, whom I named Thérèse and Francis. And I encountered the mercy of God both in the retreat process and the kindness and love I received from the team and the other participants.

Still, I was hesitant to speak openly about my abortions, believing it would be hypocritical to call myself pro-life after what I had done, and that I would be judged and condemned by the pro-life movement. But most of the women I worked with in Rachel’s Vineyard were longtime pro-life activists. They surprised me with their great love, mercy, and tenderness for me and for all women wounded by abortion. By the time our retreat team disbanded in 2008, they had literally loved me into the pro-life movement.

Later, I developed and now offer a daylong retreat called “The Healing Light Retreat” (see sidebar) so that I can continue to help others discover the grace of healing after abortion.

It was also in 2008 that I first heard about 40 Days for Life (see Celebrate Life, January-February 2009) and helped with the effort to initiate a local campaign. Finally ready to break my silence, I spoke publicly for the first time at the opening rally. To publicly share the darkest shame of my life was one of the hardest things I’ve ever done, but I hope that, by telling the story of my children’s short lives and tragic deaths, another child may be saved and another woman spared the sorrow of abortion.

I often wonder how different my life might have been if I had been advised against getting involved with Don instead of being encouraged to use birth control. I wonder if my second child could have been saved if I had encountered someone who was “silent no more” about her own post-abortion regret and grief during the eight years before my next abortion. I will never know.

Likewise, I might never know if sharing my story has influenced another woman to choose life, but with hope that it will, I continue to speak out and write on pro-life concerns, and in any available forum, I witness to the grief and regret caused by abortion. I’ve become a member of Silent No More (see sidebar and Celebrate Life, May-June 2009), and I’ve continued to stand vigil, pray, and fast as part of the powerful 40 Days for Life prayer campaign.

January 22, 2013, marks 40 years of decriminalized abortion. In our country alone, over 55 million children have been lost to the scourge of abortion.2  In a world without abortion, I would be celebrating my daughter Thérèse’s 40th birthday this year and my son Francis would be 32.

In this 40th year, we must not tire, but work, pray, and fast for a world without abortion. Although recent events seem to make that goal ever more distant, I believe that God has other plans for us—plans to give us a future full of hope, as Jeremiah 29:11 tells us. God’s plans can’t be overturned by politics or governmental policies. Believe in our God of infinite mercy and awesome miracles, Who hasn’t forgotten even one of His lost little ones! He knows the pain of the mothers and fathers who have fallen for the lie of abortion. He’s calling each of us to take up this cause, to defend the sanctity of life and human dignity, to offer true help and counsel to women in crisis pregnancies, and to direct wounded men and women to resources for healing.

It’s time to break the silence, tell our stories, and speak the truth about the sorrow, devastation, and violence of abortion. Be not afraid.

Nancy Murray writes from Richland, Washington, where she lives with her husband, Bill, and her children, Lisa, age 23, and Daniel, age 22. She is active in local pro-life and Church ministries, including 40 Days for Life/Tri-Cities, the Healing Light Retreat ministry, and Silent No More. She blogs at CatholicEthics.blogspot.com.

1This refers to private revelations that Saint Maria Faustina Kowalska is reported to have received from Jesus in the 1930s, to remind us of His immeasurable love for mankind, the overwhelming power of His mercy, and His ardent desire to grant it to repentant sinners.  Catholics aren’t required to believe in claims of private revelation (even those whose messages have been approved by the Church), but the Church has approved and promoted the Divine Mercy message and devotion because they powerfully reinforce Christian doctrine and the public revelation on which it’s based, and encourage the practice of the faith. To learn more, see TheDivineMercy.org. —Editor

2This figure represents only surgical and medical abortions.  Many more children have been destroyed by abortifacient contraception, in vitro fertilization, and embryonic stem cell research. (See “The unheard-of holocaust” in our July-August 2012 issue.) —Editor