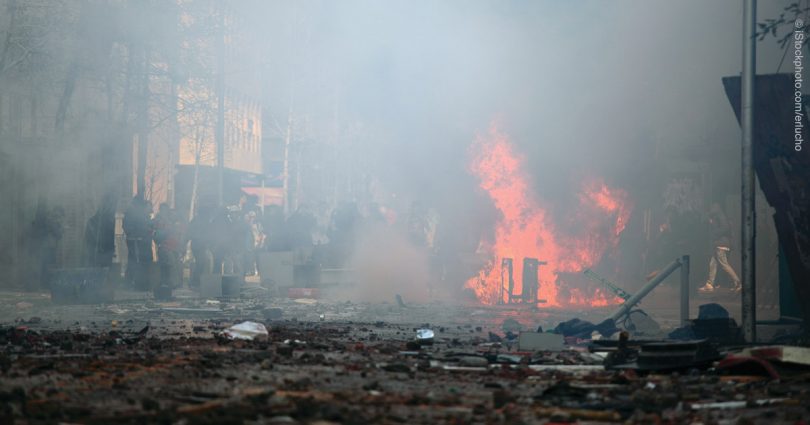 It has been so long since America lived through Griswold v. Connecticut, followed by Roe v. Wade and Doe v. Bolton, that our citizenry may not realize that our current national plague of systemic violence has roots. But really, it is not at all surprising.

If you are wondering how Supreme Court decisions dealing with human sexuality could lead to mayhem, murder, and a general disregard for human dignity, let me explain.

French archbishop Michel Aupetit explains that a lack of appreciation for the gift of fertility is the beginning. He argues that rejection of Pope Paul VI’s Humanae Vitae by Catholics—including many members of the hierarchy—led to an acceptance of contraception and abortion. In the midst of this calamitous shift away from “genuine loving interpersonal relations” there came a “corrosive shift in the way people think about parenthood and childbearing.”1

At this point, the human family began to disintegrate, and systemic violence took root, first by the slow disappearance of men as the head of the family and then by the emergence of women’s liberation as a way of life.

Rejection of fertility as the norm was the first fatality. That was followed by chemical and mechanical interventions to avoid pregnancy and the elimination of the preborn baby by an act of direct killing. In this milieu, systemic violence took root, and from there things both sexual and cultural have only gotten worse.

Contraception can and does kill, maim, and alter natural cycles in women. As Nebraska bishop James Conley explains: “Contraception conditions men and women, and therefore the cultures which they form, to deny the obvious and intrinsic relationship between sex and the conception of new life. Contraception pits couples into a kind of unknowing war with themselves. . . . It is as if they are saying to one another, ‘yes, I’m yours, but not all of me.’ This subtle and unknowing war with the partner and with the self inevitably leads to alienation, to atomization, and, eventually, to a kind of loneliness.”2

Alienation, manipulation, distrust, and disregard for the uniqueness of the human person are just some of the repercussions. If that is not a path to hostility, I do not know what is.

Americans in general do not want to get to the root cause of systemic violence because a desire to dig deeper would create discomfort. So why bother? Blame it on some radical group, a political party, or a respectable entity like a local police department and move on.

While such trivial excuses summarize the prevailing attitude today, we know that babies are still dying, women and men are still suffering, and families are in shambles. The deadly carnage resulting from the sexual revolution obliges us to bring it to the attention of anyone with ears to hear.

Believe me, politicians will never do it. Judges will not acknowledge their roles in it, and far too many religious leaders prefer to turn a blind eye rather than confront the evil in our midst.

At this moment in time, we need a restoration of moral sanity.

And while the Democrats and the Republicans are jockeying for their version of political moral high ground, the real answer is here before us, and it has no partisan label. It is simply common sense—a recognition of truth. All we need to do is take our cue from St. John Paul II, who wrote that the Gospel of Life was “meant to be a precise and vigorous reaffirmation of the value of human life and its inviolability, and at the same time a pressing appeal addressed to each and every person, in the name of God: respect, protect, love and serve life, every human life! Only in this direction will you find justice, development, true freedom, peace and happiness!”3

In the service of life, each of us can help stem and eradicate the systemic violence that begets hatred. Where there is disdain, we are called to sow the seeds of hope as we teach the meaning of true freedom, peace, and happiness in Jesus Christ.

Let the healing begin, one soul at a time.

New commentaries from Judie Brown and guest authors are posted daily at ALL.org.

2. Bishop James Conley, “The Cost of Contraception and the Joy of the Gospel of Life,” The Marriage Reality Movement, July 20, 2018, takebackmarriage.org/marriage-articles/cost-contraception-and-joy-gospel-life.