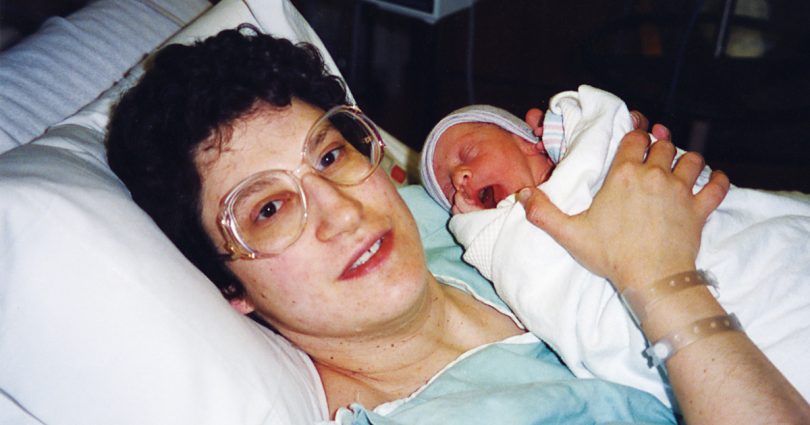 Each fall, my daughters collect construction paper in the traditional fall colors, to make our “thankfulness turkey.“ I slowly trace around their hands, marveling at how much they have grown. Their hands always seem so much bigger than they were at the same time last year. Every year, I am thankful—no, not just thankful, overwhelmed with gratitude to the Lord—that I have my two daughters and am still here to enjoy them

Thoughts from the Lord

In the early winter of 1998, my husband and I were very excited to learn I was pregnant. We contacted a wonderful doctor and made my first appointment. But before we even got there, I miscarried, losing our first child. I was devastated. Although I knew I would struggle emotionally with my loss, no one had prepared me for the physical shock to my body.

The thoughts that clouded my mind were normal; I was experiencing the grief of losing a child. But they were accompanied by different thoughts as well, whichI felt were given to me by the Lord. Since there is such a strong sense of physical loss when a pregnancy ends, I wondered how I would feel if I had done this on purpose. What about women who were told their baby was just a blob of tissue that could easily be disposed of? How do they deal with both the emotional and physical aspects of their abortion?

Although my husband and I had always considered ourselves pro-life, we had never gotten directly involved in the pro-life cause. But my miscarriage changed that. We sought out our local crisis pregnancy center, and became financial supporters and prayer partners. We prayed that the people who visited the center would choose life for their babies, and would not go through the physical and emotional loss I had experienced.

In February 1999, the Lord blessed us with another pregnancy, but it wasn’t long before we knew something was wrong. I spent the first three months feeling unusually hot. The joy of hearing my daughter’s heartbeat was clouded by the discovery that my blood pressure was much higher than normal. My doctor insisted that I return in two weeks.

Soon I was returning every week, with a diagnosis of pregnancy-induced hypertension (PIH). That was not all, however. My first ultrasound revealed that I had fibroids, noncancerous tumors that grow from uterine tissue. Unfortunately, in my case, the hormones associated with pregnancy make them grow. So there I was, with fibroids growing in my uterus along with my baby, and my blood pressure rapidly rising

My personal hardships were overshadowed by the realization that, as I suffered through these difficulties, so did my baby, since the drugs coursing through my veins were also coursing through hers. Would they hurt her? But I knew if that I stopped taking them, I could have a stroke and harm both of us. In the meantime, my PIH symptoms worsened and the fibroids grew even larger.

Finally, at 38 weeks, my blood pressure could no longer be controlled with medication. After a rapid increase, my doctor sent me to the hospital and ordered magnesium sulfate treatment. The resulting discomfort of blurry vision, extreme thirst and a burning sensation in my arm was worth it. I would be having my baby soon and hoped we would both be in good enough shape to go home as soon as possible.

However, my stressed-out body would not cooperate. I delivered my first child by emergency Caesarean section. My daughter Emily was born healthy, but I was a different story. My blood pressure did not go down as expected, but up. Fortunately, the presence of fibroids did not affect the delivery.

The first year with Emily was very difficult for me. She was fine and grew normally, but I did not feel well. It took months for my blood pressure to normalize. Finally, by the time she was a year old, I felt like myself again. My husband and I knew we wanted more children, and our doctor told us the chance for another high-risk pregnancy was small. We felt relieved and hopeful that our next pregnancy would be normal.

In 2001, during the first half of my second pregnancy, I felt well. The fibroids were still there, but small. My blood pressure was slightly elevated, but controlled with medication, and to be safe, I made a weekly trek to the doctor’s office. This time, the ultrasounds showed one rapidly growing fibroid. It had to be watched closely, so I was scheduled for an ultrasound every three to four weeks. Another Caesarean section was scheduled, in case the fibroid was too large for me to contract properly.

As I began to struggle through yet another pregnancy, my thoughts went again to my preborn baby. My first child had not been affected by the medication, so I was convinced this child would be fine also. However, my body was not taking pregnancy well. Would there be any long-term effects for me? Only the Lord knew the answer.

At last, the day of delivery arrived. Having talked to other mothers who had scheduled C-sections, I was confident all would go smoothly.

My hopes were dashed when the anesthesiologist accidentally hit a nerve in my back while giving me a spinal block. My doctor was also in for a big surprise after he made his incision. My baby’s head was wedged between the large fibroid and the wall of my uterus. My doctor was able to remove her, but both she and I were bruised in the process, and unfortunately, the fibroid had been nicked and began to bleed. I lost 1,000 cubic centimeters of blood before it was all over.

My new daughter, Bethany, had fluid in her longs at birth. After she spent several hours in the neonatal intensive care unit, she was just fine, but once again, I was not. By the time I got home with my newborn, I felt like I had lost a battle.

As my two daughters grew, I began a slow downward spiral. My ability to take care of them slowly dragged to a halt. After many exams and blood tests, in 2003, I was diagnosed with fibromyalgia. I now had a permanent medical condition known primarily for causing pain and fatigue. Not only did it affect my ability to care for my children, it would affect my ability to function for the rest of my life.

Nonetheless, I learned to manage my illness and go on with my life. My doctor has been able to decrease my pain substantially with medication. To control my fatigue, I learned to limit my activities, set priorities, exercise and get a good night’s sleep each night. For someone with my condition, I have to take very little medication, and I am slowly improving, which doesn’t always happen.

It is often assumed that abortion is necessary when a mother’s life is in danger. During my pregnancies, my life was clearly at risk, and my ability to function on a daily basis has been radically changed. What if I had decided my chance of having a stroke was too high to keep my babies? Is my health more important than the life of my two daughters?

Although my health has been compromised, I would never trade my situation. My life has been more difficult, but the blessings my daughters have brought to my husband and me are immeasurable. Therefore, I do not believe abortion is ever necessary, even for cases of medical emergency. We need to place the situation in the Lord’s hands and trust Him with the outcome. The Lord promises to help us grow through our hardships. I believe my experience has made me a better person and, more importantly, a better mother.

Every year at Thanksgiving, we make sure to thank the Lord for all of the blessings He has given us in the past year. My daughters always have many new things to be thankful for, as they remember all they have done and learned. Although my biggest blessings may sound the same each year, they are really growing, along with my daughters.

SIDEBAR: When a mother’s life is in danger

The very rare cases of pregnancy that pose a real and immediate threat to the mother’s life, including uterine cancer and ectopic pregnancies, are a source of great confusion, especially among Catholics. It is absolutely true that the Catholic Church bans abortion to save the life of the mother [emphasis added]. However (and this is an extremely important point), the mother’s life may be saved by a surgical procedure that does not directly attack the preborn baby’s life.

The most common dysfunctions that [may threaten a mother’s life] are the ectopic pregnancy, carcinoma of the uterine cervix and cancer of the ovary. Occasionally, cancer of the vulva or vagina may indicate surgical intervention.

In such cases, under the principle of the “double effect,” attending physicians must do everything in their power to save both the mother and the child. If the physicians decide that, in the case of an ectopic pregnancy, the mother’s life can only be saved by the removal of the Fallopian tube (and with it, the preborn baby) or by removal of some other tissue essential for the preborn baby’s life, the baby will, of course, die. But this would not be categorized as an abortion. [There is a huge] difference between deliberate murder (abortion) and unintentional natural death.

Joanna G. Wright is a freelance writer from Indianapolis, Indiana.