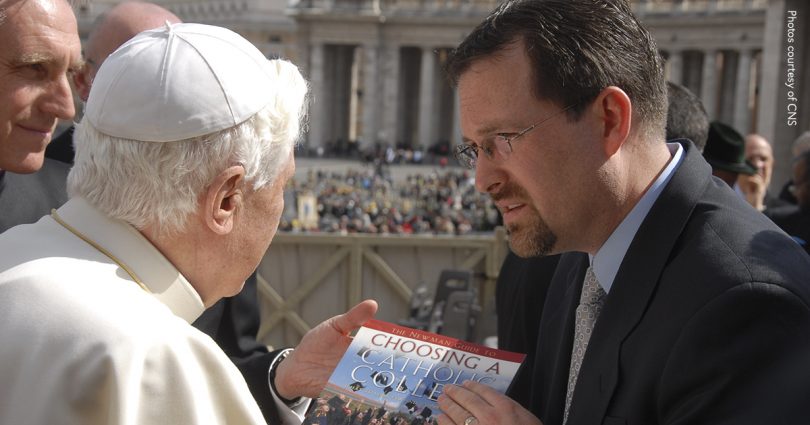 Patrick J. Reilly, founder and president of the Cardinal Newman Society (CNS), started with a dream in 1993. I feel honored to have been one of those folks who listened to Patrick and realized, in the early days of his work, that somebody had to get a handle on Catholic bastions of higher education—to restore and strengthen their Catholic identity.

In a recent note that he asked me to include in this article, Patrick reflected, “We’ve known each other for 20 years, since I was chairman of American Collegians for Life and heard the call to do something about the scandals on Catholic college campuses, including abortion referrals, pro-abortion speakers and honorees, and dissident theologians. Judie, your advice and support was so valuable, and we’ve been companions in the fight for faith and sanity ever since!”

Something was seriously amiss even then. Patrick initially worked alone in this apostolate, and when anyone took issue with his efforts, he led them to the Church’s official statement on Catholic higher education. The comprehensive Vatican document Ex Corde Ecclesiae (From the Heart of the Church), also known as the Apostolic Constitution of the Supreme Pontiff John Paul II on Catholic Universities (1990) challenges all those involved or with an interest in Catholic higher education to ensure that such institutions faithfully uphold and transmit Church teaching.

The Cardinal Newman Society has always understood the dire need to adhere to this document. On its website, CNS states, “[T]he joy of truth’s discovery is the treasure entrusted to the Catholic university. It is with this conviction that the Cardinal Newman Society was established in 1993—to promote awareness within the Catholic academic community of the nature and value of a truly Catholic university education and to seek the faithful implementation of Ex Corde Ecclesiae.”

So why has Patrick’s work earned accolades from Catholic leaders? And why has the CNS prospered and grown into an organization to be reckoned with by anyone in Catholic higher education who deviates from Church doctrine? The underlying reason for its success is that Patrick and his collaborators have never deviated from their dedication to defending and promoting truth. CNS has remained faithful to its mission.

In September, the Cardinal Newman Society took aim at the Obama administration and its efforts to deny conscience rights to anyone whose faith is in God rather than the state. Uniting 18 Catholic colleges and universities to speak with a single voice (see its “Catholic Colleges Unite to Defend Religious Liberty, Oppose Illegal Contraceptive Mandate” press release), CNS issued a resoundingly firm statement of opposition. It has focused as often as possible on the administration’s attempt to enforce anti-God regulations at Catholic institutions.

In his Oct. 28 keynote address to the Society of Catholic Social Scientists, Patrick described five major threats to religious liberty currently posed by the federal government:

He added, “We need young men and women who are formed intellectually, spiritually, and socially to be as convinced of the truth and courageous in their faith as was Saint Thomas More. We need businessmen, politicians, educators, doctors, parents who will joyfully challenge a secular culture and face the prospect of persecution.”

Volumes could be written on the good that the Cardinal Newman Society has accomplished. The organization is at the forefront of alerting the Church to both the bad and the good occurring on many Catholic campuses, and addresses all issues concerning Catholic identity in higher education. For example, as I wrote in my new book, The Broken Path,

In May of 2011, the organization issued an updated report on the status of Catholic colleges and their connections to Planned Parenthood. Entitled A Scandalous Relationship: Catholic Colleges and Planned Parenthood, the report reveals that there are more than 150 such connections on Catholic campuses in the United States. It also states that, as a result of the report being issued, 29 of those connections have been either removed from college websites or corrected in some fashion. While this is most assuredly a positive sign, it also means that 121 problematic connections remain. (p. 82–83)

CNS continues to provide updates on this tragic situation through its blog, Campus Notes.

Last year, in a battle lasting several months, CNS vigorously defended the Catholic University of America’s decision to return to single-sex dormitories (to combat sexual promiscuity and alcohol abuse), when the university was sued for sex discrimination. The lawsuit was dismissed in November. On the other hand, in a June 21 article published by CrisisMagazine.com, CNS exposed the fact that ethics and law professors at several Catholic universities have been promoting physician-assisted suicide for many years.

And in September, shortly after CNS revealed that a columnist invited to speak at Saint Francis University in Loretto, Pennsylvania, was rabidly pro-abortion, the university cancelled her appearance, stating that her views contradicted the university’s “values and mission.”

Besides organizing opposition to heretical activities on Catholic campuses and weeding out evil from Catholic college websites, CNS is making an impact on the Vatican. Patrick reported in his September 2 Campus Notes e-mail, “The Vatican is cracking down on dissent,” and “Rome is challenging heterodox material in the Jesuit journal Theological Studies, published at Marquette University.” The e-mail also mentioned that in 2005, the Vatican “quietly ousted” Father Thomas Reese as editor of America magazine (notorious for publishing doctrinal dissent).

There is no end to the work the CNS is doing. Its integrity makes it a leader in the quest to restore respect for truth in the culture at large, in Catholic institutions whose identity has been compromised, and among Catholics whose beliefs and/or actions violate Church teaching.

If you seek a solid Catholic college education for your teen, the CNS website and particularly The Newman Guide to Choosing a Catholic College will provide invaluable assistance. If you are aware of something heretical occurring on a Catholic campus near you, consult the CNS website, send an e-mail (from the CNS site), or call 703-367-0333. To keep abreast of what CNS is doing to roll back dissent on Catholic campuses and replace it with zeal for Christ, subscribe to its Campus Notes e-mails.

No matter what your needs might be, when it comes to Catholic higher education, CNS is the place to go and Patrick Reilly is the man to look to for the leadership Catholic college students need today.