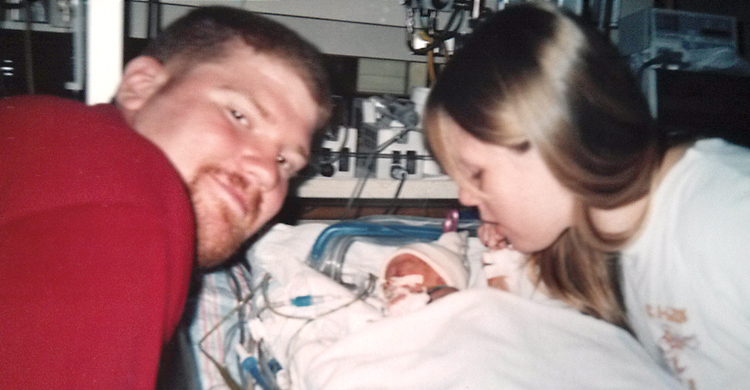 At 17, I was fulfilling my dream of working toward my degree, experiencing college life with my roommate, and having the boyfriend of my dreams. My life seemed perfect.

And then, in an instant, everything changed. I was pregnant.

As I stared at the pregnancy test in shock, my boyfriend told me that it would be okay, and that we could just get married sooner than we had planned. Once he figured out our source of income, living situation, and transportation, we told our parents that I was pregnant.

We had both grown up active in church, and not only knew that we had not chosen God’s best path for us as a couple, but also knew that the news of my pregnancy would be a huge disappointment not only to our immediate families, but to our church families and friends as well. To make the situation more complicated, my boyfriend’s father was one of the head deacons at their large church, and my father had been a pastor at another church.

Our news was not well received. Ultimately, my parents accepted the fact that I was going to marry the baby’s father and raise the child with him, and his parents offered to rent us a room in their house in which to stay.

We got married two weeks after I found out that I was pregnant, on a beautiful winter morning. Even though it was a “shotgun wedding,” friends worked hard to make it as beautiful as possible on short notice. The morning of my wedding, I woke up to find that I was bleeding. I attributed it—and my extreme nausea—to stress, and did my best to make it through the day.

The day was bittersweet for me. My new husband, who had told me that he couldn’t afford a diamond just yet, surprised me during the ceremony with his great-grandmother’s gorgeous antique diamond solitaire ring that he had reset for me. Many friends and family members drove through a snowstorm to show us they loved and supported us. I knew the road ahead would be very difficult due to our choices, but
couldn’t have known just how right my premonition would be.

Over the next few weeks, the acute nausea grew markedly worse,and the episodes of bleeding became more frequent. I set up an appointment at the health clinic to make sure that everything was all right with the baby, and was reassured that the heartbeat was still strong. Even though I had declined bloodwork which would screen for potential genetic abnormalities, I did agree to an ultrasound. The technicians were very kind, and gave me a few pictures of my baby so that I could show them to my husband. When I arrived at my follow-up appointment a few days later, I did not expect that this visit would be anything but a routine appointment.

As the doctor spoke the words “defect,” “complications,” and “kinder to terminate,” my body seemed to grow numb. I couldn’t believe what I was hearing. The ultrasound had shown that my baby’s intestines were outside of her body, and according to the doctor, this defect was often accompanied by a myriad of other complications, such as cognitive deficiencies, physical deformities, and a high chance of in-utero death. If the baby were to survive birth, then she would have a painful, struggle-filled existence. According to the doctor, I would be much kinder if I were to terminate the pregnancy, as only a selfish person would want to bring another “welfare baby” into the world, especially one which wouldhave such a compromised existence, if she were to live at all.

We chose to find another doctor, one who would support our decision to preserve our child’s life. Instead of the completely dire prediction and scorn that I had experienced from the clinic doctor, this new physicianexplained the defect: gastroschisis, which is where a hole in the abdominal wall does not close properly, causing a portion—40 percent of the small intestine in this case—to protrude outside of the developing body.

She went on to explain the prognosis: My daughter had a high probability of a  premature  birth, possible   birth complications, surgery after birth, lengthy hospital stay (up to 18 months), likely developmental delays, health complications later in life, and a minor chance of fatality. We toured the neonatal intensive care unit of the hospital, and saw the heartbreaking presentation of tiny babies who were struggling for their lives. We agreed to regular high-risk pregnancy care, submitting to bi-weekly and then weekly visits to ensure that the baby was still thriving, and not in any danger which would require emergency measures.

Over the next few months, our world revolved around the survival of our tiny family. Instead of enjoying the newlywed life, even with the hardship of marriage at a young age, we had to face criticism from people who thought that we were fools for not choosing abortion, condemnation from some in the Christian community who said that our child’s birth defect was a direct result of our sin, and the fears of the unknown outcome of our child. My husband had to balance his college work, football training, and care for a very sick young wife, while I struggled to keep praying and believing that God would heal my child. My nausea was so severe that I could not keep much of anything down, while my intermittent caused me no small amount of fear that my child had died. Each new ultrasound taken showed that the baby was still alive, but not healed. This caused my hope to plummet.

We have a girl!

When I was almost 32 weeks along in my pregnancy, the baby stopped moving. The amniotic fluid had been absorbed by the baby’s intestines, which meant that a caesarean section would have to be quickly performed. In the delivery room, several medical teams waited to assist with the birth, stabilize, and then transport the baby to Children’s Hospital for immediate surgery. Since no one knew whether or not the baby would be able to breathe on her own, the atmosphere in the operating room was tense. When the baby was lifted out of my body, she was strong and full of life and her loud, angry cries filled the room as she squirmed around so vigorously that the doctor had to place her down on my abdomen so that he could get a better grip on her.

My daughter was quickly prepared for transportation by the medical team and then brought to me so that I could see her before they took her away. As tears streamed down my face, I looked at this tiny bundle, whose entire midsection from shoulders to knees, was overlaid in a large, plastic wrapcovered mass of intestines. Since my arms were still strapped down from the surgery, I could not even touch her, but the nurse held my baby so that I could at least kiss her face before she was taken away. My husbandleft the room with my daughter so that he could sign all of the necessary forms, and I was left with a picture of my baby that one of the caring medical staff had taken for me, and an empty place in my heart.

Much later that night, the phone in my hospital room rang. My husband answered it, while I lay, frozen in fear. His voice was low, so I couldn’t catch the words that he spoke. He hung the phone up, and turned to look at me, tears streaming down his face.

“The doctor said that it was a miracle. They don’t know how it happened, but they got all of the intestines back in one surgery.”

Our daughter stayed in the hospital for six weeks, coming home two full weeks before her due date. Instead of having any developmental or cognitive delays, she thrived, reaching all developmental milestones early, and far surpassing any predictions from the healthcare professionals. Throughout her childhood, she won multiple awards for physical fitness, was at the top of her classes, and has excelled at anything
that she has attempted. Today, our daughter is 18, an accomplished dancer and artist, and is full of more life than anyone else I have ever met. To look at her, you would never know that at one point in her life, it had been very strongly recommended that her life be terminated.

My daughter is just one example of the preciousness of life. If I, a young teenage mother, had listened to the counsel of health professionals, taking their word that I would be doing a “kindness to my fetus by terminating its painful and profitless existence,” then I would have robbed myself and the world of an incredible life. Every Mother’s Day I thank God that the value for human life had been instilled in me as a young child, because if I had not been taught that every life is precious, I would have chosen the easier route of abortion, and would not be able to celebrate this day with joy. I am very grateful that those values had been instilled in me, so that I did make the hard choice to continue with a very difficult pregnancy, in spite of overwhelmingly devastating odds. It is for this reason that it is imperative that individuals continue to educate others about the value of life. After all, you never know what life your efforts will save.

My daughter, Brianna, is alive today because of someone’s courage to teach me that every life is precious. That is something for which I will be eternally grateful.

Marybeth Mitcham holds a BS in Biology, is completing her MPH in nutrition, and currently works as a tutor for Liberty University’s Online Writing Center. She is an emerging freelance author, whose writings have been published online, and in the Christmas Moments #2 anthology. She recently was a guest on the Chris Fabry Live radio show, discussing her latest article, “My Magnum Opus,” and is a public speaker who promotes the importance of different humanitarian projects. She is currently working on her first book. Marybeth lives with her family in the Southern Adirondack region of New York.