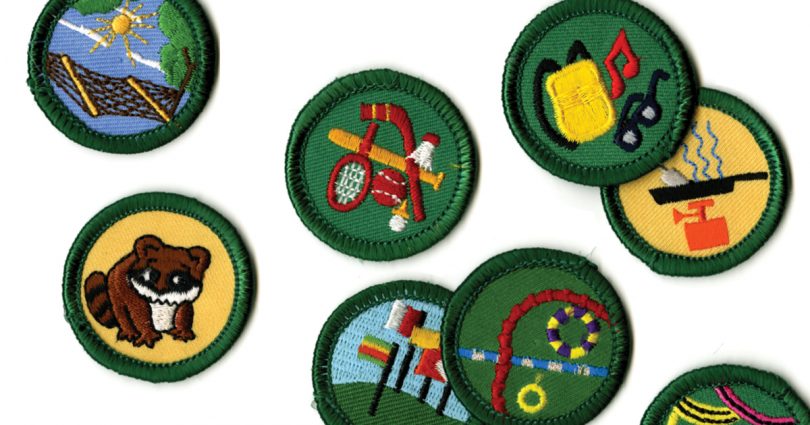 The year 2012 marks the 100th anniversary of the Girl Scouts of the USA. The organization kicked off its centennial celebration at its November 2011 national convention, held in Houston. The theme was “Renewing the Promise: Girl Scouts in a New Century.” To envision where the Girl Scouts are going in the 21st century, it’s important to know where they’ve been.

I was a Girl Scout in the 1960s. Decked out in green uniforms, we cross-stitched pillowcases and wove reeds into baskets that were distributed as gifts at nursing homes. Life was simple then. Based on my own positive experiences, I enrolled my two daughters in Girl Scouts. And as an interested and involved parent, I briefly became a troop leader to see exactly what was happening on the local level.

In addition to the usual cookie sales and camping trips, there were community functions, special dinners, and charity events. There were even trips to a nursing home. My girls had terrific leaders, who were energetic and enthusiastic beyond my realm of experience and expectations. But that was nearly 15 years ago. A lot has happened since then.

One such partnership occurred in Waco, Texas, where the local Planned Parenthood affiliate holds an annual sex education conference called “Nobody’s Fool,” for children in grades 5-9. In 2003, Planned Parenthood began distributing It’s Perfectly Normal: Changing Bodies, Growing Up, Sex, and Sexual Health to children in grades 7-9 at this conference. This pornographic book, aimed at children as young as 10, contains explicit descriptions, depictions, and promotion of various sexual activities, and portrays abortion and other sins against life, marriage, and family positively.

The local Girl Scouts council was a regular sponsor of “Nobody’s Fool,” but by 2004, thanks to public outrage generated by American Life League Associate group Pro-Life Waco, the Waco Girl Scouts ended their 14-year conference sponsorship and cut ties with Planned Parenthood. In the same year, Stop Planned Parenthood (STOPP.org), an ALL project, launched a nationwide investigation of the Girl Scout councils. About a third of the councils responded to its inquiries, with 22 percent of the respondents revealing they had a relationship with Planned Parenthood.

Family Watch International is an organization that advocates for traditional marriage, families, women, and children at the United Nations and abroad. Its president, Sharon Slater, attempted to observe a “Girls Only” workshop held at the UN in March 2010. It was sponsored by the Girl Scouts and three partner organizations in conjunction with the UN Commission on the Status of Women. Although Slater was denied entrance, she slipped into the room when the meeting adjourned and found, on a table, numerous booklets titled Healthy, Happy and Hot: A Young Person’s Guide to their Rights, Sexuality and Living with HIV. Published by the International Planned Parenthood Federation, its stated purpose is “to support your sexual pleasure and health, and to help you develop strong intimate relationships” (p. 2).

The booklet contains graphic information on sex, and teaches youth and young adults that they have a right to engage in any type of sexual behavior they desire: “[T]here are lots of different ways to have sex and lots of different types of sex. . . . Just have fun, explore, and be yourself!” (p. 7). It also portrays same-sex relationships positively, tells those infected with HIV that they don’t have to inform their sex partners, provides tips for “safer sex,” and promotes “safe abortion.” If that perilous and promiscuity-promoting “literature” was available to young girls at the Girl Scouts’ UN workshop, what materials were available at their national convention last year?

Anna Maria Chavez became the Girl Scouts’ CEO in November 2011. Chavez has aligned herself with pro-abortion politicians, and in 2009, as CEO of the Girl Scouts of Southwest Texas, she was the keynoter at an eventsponsored by a coalition that included a Planned Parenthood affiliate, Planned Parenthood’s Government Affairs Council, and several other pro-abortion groups.

Chavez talks out of both sides of her mouth. In February 2012, she sent a letter to Catholic bishops and Church officials that claimed the Girl Scouts are committed to building “stronger ties with all faith communities, including the Catholic Church,” while she promoted a billion-dollar fundraising endeavor with events featuring speakers who have little regard for the Church or its moral teachings, such as Rep. Nancy Pelosi. Joanna Coles, then editor of Marie Claire magazine (and now editor of salacious Cosmopolitan magazine), spoke at the January 31 kickoff event. Under her leadership, Marie Claire published several articles supportive of Planned Parenthood, received an award from it in 2008, and featured plenty of fare promoting contraception, abortion, and sexual immorality—including articles urging readers to oppose laws intended to curb underage teen sex. Is she an appropriate role model for Girl Scouts?

In May of this year, the US Conference of Catholic Bishops’ Committee on Laity, Marriage, Family Life, and Youthopened an investigation of the Girl Scouts’ ties with other organizations and the content of their program materials.

Sydney Volanski (16) and her sister, Tess (15), of The Woodlands, Texas, felt betrayed by the Girl Scouts once they realized some of their policies and activities violated their Catholic values. They left the organization in 2010, after eight years of membership. “I got my courage from God to take this stand, and I know He will always help me through it,” Sydney said with a soft-spoken voice.

Last year, they created a website (SpeakNowGirlScouts.com) to document and spread the word about the Girl Scouts’ affiliations with Planned Parenthood and promotion of anti-life philosophies. “I was shocked when I found out,” Sydney said. “My sister and I felt deceived. Tess was very sad, and I was mad that the Girl Scouts would not tell the truth about their connections. We want families to be aware that Girl Scouts is not necessarily what they think it is.  . . . The infiltration in the Girl Scouts is subtle; it isn’t easy to tell when you first look at it.”

She advises concerned families to pray for guidance, examine all the evidence, and reach their own conclusions: “Look at all of the women they reference and all of the books they refer girls to, and look at their connections for yourself.” She continued, “The Girl Scouts will say they don’t take a stand on abortion, but if you look at the evidence, it tells a different story.”

Kathy Schiffer, who blogs at Seasons of Grace, (Patheos.com/blogs/KathySchiffer), won’t buy Girl Scout cookies because of the organization’s alliance with Planned Parenthood. She wrote on March 15, 2011, “[W]hile a portion of the proceeds of cookie sales remains within the local council, the funds are shared with the state and national organizations. . . So every dollar spent on [cookies] will help to advance the Girl Scouts’ liberal, far-left policies.”

When questioned about the moral decline among adolescent girls, Schiffer commented, “I blame the feminist movement because that’s when we stopped thinking that families were important. Women felt that they should work. Now we’re seeing the fruit of that movement.” She believes we’re on a dangerous track, and society needs more saints and other positive role models. “We need moral leaders,” she said. “I wish the Girl Scouts would return to the values that they were founded with.”

There are many good people involved with the Girl Scouts, but at the national level the organization has leaders with an agenda opposed to traditional Judeo-Christian values.

There are a number of worthwhile alternatives to the Girl Scouts (see sidebar). Probably the largest and best-known organization is American Heritage Girls, which seeks to develop “women of integrity through service to God, family, community, and country,” and is open to girls of all faiths. Due to the Girl Scouts’ 1993 decision to allow other words to be substituted for “God” in its pledge, Patti Garibay and other concerned parents in West Chester, Ohio, established this Christ-centered program in 1995, and it has now spread to 44 states and four countries.

Her story is an inspiration for others who may want to create a program within their own school, church, or neighborhood networks, to provide a safe, nurturing environment for girls—free of Planned Parenthood’s influence.

Parents who are concerned about the moral decline among today’s youth must get involved in all aspects of their kids’ lives—not just scouting programs. They should listen to their kids’ music, watch their television shows, read their books, volunteer at school functions, and know their friends. We can’t keep our kids in a bubble. So we must keep the lines of communication open, and guide our kids by providing good examples and positive role models.

It takes energy to denounce Planned Parenthood’s abhorrent “educational” tools and to stand up for what is right, but we owe it to our kids to do exactly that. If you’re unhappy about the Girl Scouts or Planned Parenthood, don’t just complain; take action!

For more information on the problems in the Girl Scouts, also see these websites: STOPP.org/scouts (see the home page also, to learn more about stopping Planned Parenthood), ProLifeWaco.com, 100QuestionsfortheGirlScouts.org, GirlScoutsWhyNot.com, and WomenofGrace.com.

Barbara Canale writes from Jamesville, New York, where she lives with her husband, Patrick. They have two beautiful daughters adopted from Romania (see our November-December 2011 issue). She has had 11 stories published in the Chicken Soup for the Soul book series and just completed Prayers, Papers, and Play: Devotions for Every College Student, soon to be released by Liguori Publications.