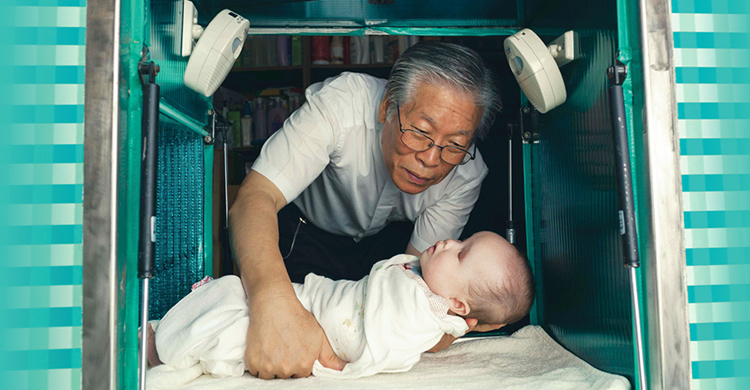 In the quiet of night, when the doorbell chimes and resonates through his home, Pastor Lee Jong-rak runs down the stairs without delay. He knows that a precious visitor has been deposited in the baby mailbox that he’d fashioned onto the outside of his laundry room. He reaches into the box, takes the baby out, prays over her, and unravels the swaddling to see if she is okay. Pastor Lee has done this over 700 times since he built what he calls a “baby box.”

In 2009, on a freezing winter’s night, a baby girl with Down syndrome was left outside his home lying in a fish box. After finding her, Pastor Lee felt prompted to do something about the infant abandonment problem in South Korea. He knew that if he didn’t do something to save these children, he could be picking up their dead bodies at his gate.

Backstory of The Drop Box documentary

In 2011, Brian Ivie was 21 and a rising junior at the University of Southern California Cinematic Arts when he read an article in the Los Angeles Times about Pastor Lee’s baby-saving efforts.

“The way the article [“South Korean Pastor Tends Unwanted Flock”] talked about it, these kids were the most disposable kids in the country and there was something in me that said, ‘This isn’t okay. If I don’t do anything about this, everyone is going to forget.’ That thought went off in my head like an alarm bell—similar to the one that I would hear, not six months later, go off in the orphanage,” Ivie, the director of The Drop Box, said in a phone interview.

Ivie felt compelled to make a film about these unwanted children—most of whom had disabilities or deformities. He set the wheels in motion by emailing the correspondent who wrote the LA Times story and by reaching out to Pastor Lee. From the first, it seemed that God really wanted this story told. Like clockwork, everything fell into place for him—and with abundance. Ivie and his film crew had hoped to raise $5,000 to make a short film, but instead they raised $65K and were given an additional $50K in film equipment.

Their five-minute short turned into a full-length 80-minute documentary that would consume the next two-and-a-half years of the film student’s life and would include three trips to South Korea.

Talking about his first trip to South Korea in December of 2011, Ivie recalls that he had mixed motives in making this film. He realized that he would be helping a family and abandoned children, but in the back of his mind, he was thinking that this short film could also be the vehicle to get him into the prestigious Sundance Film Festival. His intention was to tell an interesting story that would start his career as a humanitarian filmmaker. It would be “a story of a man, who within a perfectionistic Korean society, was taking in children with deformities.”

It became apparent to Ivie that his vision for the film was not the story that God wanted to tell because there was a roadblock everywhere he turned. The people he needed to interview were either unwilling to be on camera or gave uninteresting interviews.
However, every time they filmed at the orphanage, Ivie would think: “This is working; this seems right.”

On that first trip to South Korea, Ivie and his crew lived in an apartment near Pastor Lee’s home—a cramped three-story lean-to housing the pastor’s family of 20—which also serves as an ad hoc orphanage and as his church, called Jusarang (“God’s Love”).

Ivie’s living apart at that time seems symbolic of his difficulty in immersing himself into the gritty, sacrificial life of loving and caring for children whom society deems unlovable. “I felt uncomfortable around the children at first. I had pity for them. Pastor Lee didn’t. I was taken aback. There’s a difference between having pity for someone and having love. Pastor Lee didn’t pity them or endure them; he really liked these kids—no matter what they offered him or if they could offer him anything at all. A lot of these kids could only lie on their backs the rest of their lives.”

In contrast to Pastor Lee, Ivie found himself easily annoyed and frustrated with the children because they sometimes interfered, and they didn’t take direction well. Ironically, “I was thinking: ‘Gosh, they are in the way of this movie that I am trying to make.’”

Then Ivie would look at Pastor Lee and wonder how he could change his adult son’s diaper and still be smiling. Ivie thought, “’Man, what is motivating him? Who is this man?’ I wanted to be like him. I wanted what he had. When people see Christianity at work in the real world, they say, ‘I don’t know what it is, but I want it.’”

Ivie considered himself a Christian before he made his first trip to Korea, but he later realized that he was a shallow excuse for a Christian. “I thought I was Christian because I didn’t smoke cigarettes and I watched Fox News with my mom.”

During the documentary, Ivie felt compelled to prove that he was Christian so he began wearing a cross necklace that he had purchased on Amazon for eight dollars. “I felt that I had to communicate symbolically to this world I am going into this with Pastor Lee. I really wanted to be a Christian for him, so I could be the authority to tell his story, but eventually the cross can’t be something you buy on Amazon for eight dollars. It has to be what bought you.”

After returning from Korea, Ivie began searching in earnest for Christ. He wanted to be able to love like Pastor Lee. One night, he unexpectedly encountered Christ while sitting at his computer—the same computer where he had viewed porn in the past. He was listening to a podcast about Jesus Christ dying for our sins when something profound happened. “Like a movie through my mind, I pictured Jesus Christ taking my place throughout my whole life. I started to see all of my deformities and all of my faults—all the stuff inside that no one else saw. I was broken up, but at the same time, when I hated myself most, I felt loved most—more than I had ever experienced in my whole life. It was in that moment that I realized that I was just one of those kids placed in the drop box—bound up in the dark in the little womb—and pulled out into the laundry room into the light by a Father. It was the love that wanted me; it was a Father’s love that broke into the situation that changed my whole life.”

Surrendering the project to God

When Ivie returned to South Korea to film for a second and third time, he went with a humbler attitude and without an agenda or a storyline. “I just went back with faith and God started putting something together that was way bigger and way more extraordinary, more compelling, more human, and more real than anything I was trying to do.”

This time he would stay in Pastor Lee’s home and sleep on the floor with the children to remind himself of who he was. He would also get up every morning at 6:00 a.m. to pray on his knees with Pastor Lee. “I would come down after having this time with God and Pastor Lee and suddenly I was impenetrable. I could love the children and hug them. They could punch me and I could take it. God allowed me to really enjoy the kids even in their worst moments and to love them. Once you get touched by that kind of love, you can pour out without losing a drop,” he says.

Ivie was deeply moved by what lengths Pastor Lee and his wife were willing to go to protect one life. Before making The Drop Box, Ivie says the only life he was concerned about was his own life; the abortion issue wasn’t even on his radar. Making The Drop Box changed his apathetic view. Now he calls himself “vehemently pro-life,” and he’s not shy about sharing this.

The Drop Box is a pro-life film, but the words “pro-life” or “abortion” are strategically never mentioned. “My job with this film was getting people to care about the lives of people you normally wouldn’t. I think the only way for people to hear the message of this film is if we don’t set off the alarm bell, but let them see the same reality that we’re seeing. I want people to see that every life matters. I hope people look at the lengths Pastor Lee is willing to go to protect just one life.”

In March 2015, more than a quarter million people saw The Drop Box, which was distributed by Focus on the Family in a limited theatrical release. The film has led many families to contact Ivie’s non-profit organization, Kindred Image, which was founded to help end child abandonment and foster a culture of life in South Korea. Faith and Ryan Mahoney were one of those couples. Their three children now have a little brother with Down syndrome because The Drop Box inspired them to adopt.

Since the airing of the film, Focus on The Family—partnered with Kindred Image—has raised 1.4 million dollars for Korean orphans and children in American foster care. As a result, Pastor Lee and his family were able to move to a much-needed larger home. Their former residence is currently being converted into a maternity shelter for mothers in crisis.

Although The Drop Box and the press surrounding the film focuses on Pastor Lee, it’s clear that he could not have done so much to save unwanted babies without the support and dedication of his wife.

Brian Ivie told Celebrate Life a little about Mrs. Lee. “Although Pastor Lee ends up on screen more often, just by nature of his pastoral position and gifts, Mrs. Lee is the tireless mother hen behind every sacrificial decision that the Lee family makes. Years ago, she worked long hours at a restaurant to get Pastor Lee through seminary and was actually the one who entreated him to attend church in the first place. She is a recklessly joyful and hilarious woman.”

The Drop Box was released on DVD in July of 2015. The movie can be purchased at thedropboxfilm.com for $14.99. Donations to help Korean orphans and American children in foster care can be made on the website. The film is available on Netflix.