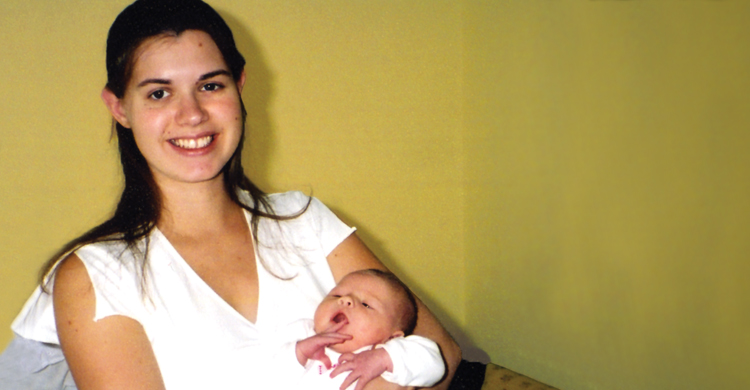 “Mom, I’m pregnant,” whispered the voice on the phone. It’s bad enough to hear those words in person, but when your daughter is 900 miles away in a new town with a new job and no friends, the fear is overwhelming.

When she was a new university student, Natalie had cautioned me about giving unsolicited advice by saying, “I’m just telling you about this, Mom; I’m not asking for you to tell me what to do.” Now, with her voice cracking, she asked, “What should I do?” I worried about her reputation in a new community. And as an engineer, she was in a male-dominated profession and had no support system.

I finally said, “This has to be your decision. You’re making your first decision as a mother.” I knew in my heart she would not choose abortion. “Just remember that you have to be able to live with this decision for the rest of your life.”

Natalie wanted me to tell her dad, but I refused: “No, you know we’re having problems. I think he’ll take the news better from you.” His advice was to abort the baby, telling her that having the child “will ruin your career.” She told him she couldn’t fathom having an abortion, and she refused.

At first Natalie rationalized keeping the baby: “It’s not like I’m a teenager. I’m 23, an adult with a good job.” She knew someone who ran a day-care service in her home and would accept another child. I said, “If the baby is ill, then you can’t take the baby to day care, and you’ll have to stay home from work or find someone you trust to babysit.” I wasn’t looking to be negative, but having three children, I had a better sense of reality.

When Natalie talked about adoption, I wondered if she had any inkling of how difficult it would be to part with the baby. I wasn’t familiar with open adoption.* “How do you know the adoptive parents won’t move away?” I asked her. Would seeing the baby be reassuring or painful? From the little I knew about open adoption, it seemed to rely on instinct, trust, and faith. Having no one to consult but God, I prayed for guidance.

Ultimately Natalie focused on what she wanted for her baby girl and decided on adoption, telling me, “I want her to grow up having both a mother and a father, like I did.”

Preparing for the blessed event

That July I flew to the East Coast, and in a tiny, stiflingly hot kitchen, I cooked Natalie her favorite foods and finally felt productive. We laughed at her fifth-month belly, walked on the beach, and celebrated the pregnancy. She was comfortable with her decision and that brought me peace.

Natalie forwarded the weekly emails she received that described the baby’s development. Her excitement grew along with the child within, and she monitored her diet for her baby. “Can you believe you’re going to be a grandmother?” she asked. “Yes,” I replied. But I didn’t share that I also mourned the fact that she wouldn’t know me as her grandmother.

At work, Natalie confided her news to the corporate officer who hired her. He offered to transfer her to a different position during the pregnancy. His wife, a minister, offered Natalie a room in their home so she wouldn’t have to be alone. Even though she refused both offers, I sensed that God was sending angels to watch over her.

Natalie’s situation was kept to our immediate family and my mother. I didn’t want to hear any comments or answer any questions that would divert my focus from Natalie’s needs. Afterward our family marveled at her strength and courage.

Natalie was adamant about finding the “right” parents for her baby. She finally found a couple, but suffered a setback in her eighth month. The adoptive couple learned they were expecting and withdrew from the adoption process. “Maybe this is a sign that I should keep the baby,” Natalie said. I prayed for her. I prayed for an easy labor and healthy baby, and I prayed that she would have peace with her decision.

Within two weeks, another couple was brought to her attention. There was an immediate connection. “They are churchgoers, both educators, well grounded, with similar values,” the adoption agency told Natalie. The couple was excited to find out that Natalie had never used drugs or smoked, and was thrilled to be getting a healthy baby.

Having booked the flights in haste, I now realized that I would arrive at midnight, instead of 12:00 p.m. as I had intended. Natalie relayed this information to the adoptive parents, and they insisted on picking me up at the airport. I appreciated their gesture of kindness, but my nerves were jumbled. I desperately wanted to like them and for them to like me, since they would be raising my granddaughter.

I hesitated as I left the baggage claim area, not knowing where to head in the deserted terminal. My eyes met those of a man walking in my direction. I was looking for a couple, so I was about to pass him as he said my name. Pointing to the top floor, he said, “My wife is scouting all directions from up there. She wanted to be sure we didn’t miss you.”

The awkwardness faded quickly and conversation flowed like a beautiful symphony. We talked about Polish foods, family history, my Polish heritage, and the struggles that both of them and Natalie had faced in the past nine months. Their sincerity couldn’t be denied, and I was touched by their compassion. More than once, they said we were family. They said they would keep the name Natalie chose for the baby: Amy.

The day after my arrival, I took my mother to the airport, and then took my daughter and granddaughter home from the hospital. We had only two days to bond with Amy and then let go. “I won’t come in during the night unless you call me,” I said to Natalie, not wanting to be overbearing. During those two days I snapped enough pictures to fill a photo album.

The birth father came to see the baby and sign the release papers. He was a college student from another state and emotionally unavailable to deal with the pregnancy. He had delayed telling his parents until Natalie’s seventh month of pregnancy.  At first I was angry at his inability to participate in the process but later forgave him, realizing his input could have fomented more stress and possibly a different outcome.

The day arrived for Amy to go to her new home. In nervous anticipation, I made coffee and baked a couple of cakes for our guests. The adoptive parents arrived promptly at 1:00 p.m. As we sat around the kitchen table, talking about the birth and the plans made at the new home, the adoptive mother presented Natalie with a hand-crocheted doily made by her grandmother. “This is a family heirloom that I want you to have because you are now part of my family,” she said. Then she presented Natalie with a wrapped gift. Inside was a charm bracelet with one charm. “You have one, I have one, and our daughter has one,” she said. “Each year we will add to the bracelet as we are bound together as family.” No one held back their tears.

Finally the new dad said, “Can we pray?” In the living room, we stood in a circle surrounding little Amy, who was cradled in a car seat on the floor. We held hands and prayed the our Father (the Lord’s Prayer), and gave thanks for one another and the miracle that had brought us together. We became a family that day.

After they left, Natalie repeated something she told me a few months earlier: “The right thing to do isn’t the easiest thing to do.” I had witnessed my daughter’s transformation into a woman and mother who, honoring the gift of life, displayed unselfish love by providing her baby with the best possible foundation for her life.

The adoptive parents called Natalie the next day with a progress report. They continued the practice after each visit to the pediatrician. This contact was priceless in that it enabled us to celebrate Amy’s life. Each time I tell the story to family or friends, we always shed tears.

Amy will be 13 this year. She attends church, plays several musical instruments, is active in  sports (she recently started bowling), and loves to assemble Lego building kits. Amy knows she is adopted and has extended family. In the early years she called Natalie “Angel Natalie.” Amy’s mother and Natalie stay in touch, and Natalie visits her at least once annually.

With little opportunity to travel, I have only seen Amy five times so far. My occasional card is always reciprocated with a picture or note. Amy’s mother has asked me for photos and family history for this inquisitive young girl.

Sure, I miss the fact that I don’t have a grandchild I can bake cookies with, tell stories to, and get hugs from. But Amy knows she is loved by all of her families, and I am proud of the fact that—because of my daughter’s selfless love—Amy’s life is a blessing to so many.

Kathleen Yonker is a freelance writer in the Chicago area and the insurance liaison for a financial advisory firm. She has been a peer-group facilitator at her church for 10 years, helping the widowed and divorced work through their grieving process, and frequently sharing her written stories and prayers with them. She holds a bachelor’s degree in journalism and was a publicist for the former Copley Chicago Newspapers.

* In an open adoption, contact between the child and his or her birth parent(s) is permitted after an adoption is finalized. —Editor

Kathleen Yonker is a freelance writer in the Chicago area and the insurance liaison for a financial advisory firm. She has been a peer-group facilitator at her church for 10 years, helping the widowed and divorced work through their grieving process, and frequently sharing her written stories and prayers with them. She holds a bachelor’s degree in journalism and was a publicist for the former Copley Chicago Newspapers.