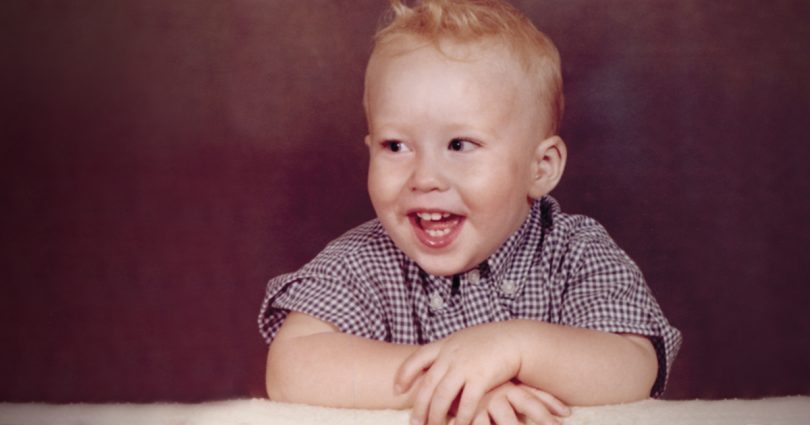 I was eight years old as I lay in bed that Saturday afternoon, reading a Spider-Man comic book. Mom knocked on my bedroom door, then poked her head inside. She said, “Can we come in, Frankie? Your father and I have something very important we’d like to talk to you about.”

I assumed that I was in trouble, so I set Spider-Man aside and propped myself up in a more reverent posture, preparing to receive my punishment with dignity. Mom glanced at Dad, then at me.

“Frankie, we are not your biological parents,” Mom revealed. “We adopted you when you were just a baby. We know nothing about your biological mother except that she wanted you to have a better life.”

They told me repeatedly how much they loved me. They also told me other things to make me feel good, like how cute I was as an infant and how they had never regretted their decision to adopt me.

“How do you feel about all this?” Mom asked.

“Are you bothered by any of this?” they asked.

“Good. We wanted to tell you sooner, but we didn’t think you were ready,” said Mom.

The entire conversation took five, maybe 10, minutes. I reclined again in bed, numb from head to toe. I wasn’t angry or sad—just numb. I felt that my entire life had been an illusion.

Search for my mother

The numbness soon faded and was replaced by a burning curiosity: What does my biological mother look like? How old is she? What kind of personality does she have? These questions echoed through my head relentlessly like a broken record, day after day, year after year. Above all, one question echoed the loudest: Why? I therefore purposed in my heart to find the answer, no matter how long it took.

As the years went by, the subject of my birth mother was taboo in family discussions. Mom was fragile and overprotective; she could not bear the thought of another “mother” claiming me. Thus, I decided to let the issue rest for a while.

After years of research, my efforts finally yielded a tangible result. At the age of 35, I held in my hand the address and phone number of my maternal grandmother in Texas.

My hands were shaking and my mouth was parched, which made it difficult to speak. I finally summoned the courage to dial. Moments later, a woman with a dignified voice answered the phone. I asked for her by name. “This is she,” the woman said.

“My name is Frank Hermann. I’m the boy that Elaine put up for adoption 35 years ago.”

By then my nervousness had given way to relief. We talked for about an hour. She told me about my birth mother and described her appearance in detail. She also told me that she and my mother were Christians and then gently inquired about my religion. I informed her that I too was a Christian—a Catholic. She seemed pleased.

Skillfully, my grandmother managed to avoid mentioning the circumstances surrounding my birth. She said my mother, who was out of town on business for a few days, would explain everything to me upon her return. Two days later the phone rang.

“Hi, Frank. This is Elaine— your birth mother,” she said. “How are you doing?”

“I’m doing great—how about you?” I asked.

We both groped for words like shy strangers at a party and spent the next few minutes engaged in small talk. The conversation gradually built momentum and she told me about her life. It had been hard and she had struggled throughout the years to make ends meet.

“I suppose you want to know why I put you up for adoption,” said Elaine.

“Well, the question has crossed my mind a few times,” said I.

I listened attentively as she recounted the story, but I got more than I had bargained for. She had been raped.

At age 17 she was sexually assaulted by a man whose affections she had spurned. Apparently, this individual was not one to cope well with rejection, for he carefully plotted his revenge and waited for the opportune moment to exact retribution, confident that his deed would go undiscovered—or at least unpunished.

Elaine eventually managed to flee her assailant. Before the night had ended, Elaine found herself in the emergency room, answering a barrage of questions from both doctors and police.

She decided not to press charges. Another girl at her school had experienced a similar plight and had taken legal action—a move this young woman would regret, as the litigation proved both fruitless and traumatic. Wanting to avoid such trauma, Elaine decided to try to put the whole incident behind her. And she did—for a month or two—until the morning sickness began.

My mother was confronted with three choices. The most convenient was to “terminate” the life growing within her. Despite the temptation that must have weighed heavily on her mind, it was an option she resolved not to pursue, knowing that two wrongs would not set matters right. Without a job or even a high school diploma, Elaine thus felt she had no choice other than to place me up for adoption. “So that’s the story,” she told me.

Although outwardly I retained my composure, on the inside I experienced a struggle I was scarcely prepared to endure. My soul writhed in agony as I recalled the words of the Psalmist: “Behold, I was brought forth in iniquity, and in sin did my mother conceive me.” I felt dirty, disgusting and evil. I wondered whether I was a mistake and not meant to be.

Aware that my presence in her life must have stirred up a hornet’s nest of unpleasant memories, I volunteered to sever contact with her, but she didn’t want to. Instead, she told me how happy she was that I found her, for she had wondered about me as often as I had about her.

From doubt to certitude

The next few weeks became the lowest point of my life. I existed in a stupor, unable to eat or sleep. Overwhelmed by guilt, I seemed unable or unwilling to forgive myself for a crime that I never committed. But the worst feeling was unworthiness—as if I were unworthy even to exist. Maybe that stemmed from the attitude common to pro-abortion and some “pro-life” camps, insofar as they try to justify abortion for babies who are conceived during rape or incest. As a sensible man, I was fully aware that my state of mind was irrational and my insecurities baseless. Yet logic alone seemed unable to liberate me from this insufferable captivity. However, I soon realized that love triumphs where reason cannot prevail.

While sulking one afternoon about the sour hand I had been dealt in life, a deceptively simple thought—a question—surfaced in the back of my mind: Would Mom and Dad still have loved me had they known I was brought into the world through a senseless act of violence?

In a moment of spiritual epiphany, I felt my insecurities evaporate like dew in the morning sun, for I had never questioned Mom and Dad’s love for me. Only now, however, did I begin to grasp the unconditional nature of their love—a love that embraced me not because of my achievements or lineage, but because that is what love does: It embraces others unconditionally.

I became aware of an even greater love, the supreme Love that had called me forth into existence and knit me in my mother’s womb. And for the first time in my life, I clearly understood the truth about my life. The words of the fourth Gospel assumed a new meaning for me as I realized that, despite the horrid details leading to my conception, I was born not of blood, nor of the will of the flesh, nor of the will of man, but of God. I acknowledged myself as part of the sovereign Creator’s mysterious plan and resolved to bear my small cross with joy. The anger toward my biological father that had long festered within me yielded to forgiveness. Without malice I said to him in my heart, as Joseph was able to say to his brothers, “Though you meant it for evil, God meant it for good.”

Because of my biological mother’s love, I live. Because of my adoptive parents’ love, I grew to be a husband and the father of four children. We—five individuals composed of body and soul—live because three people loved me unconditionally and decided to celebrate life over death: three people whom I shall always be proud to call my parents.

Frank W. Hermann, Ph.D. is an assistant professor of English at the Franciscan University of Steubenville, Ohio.