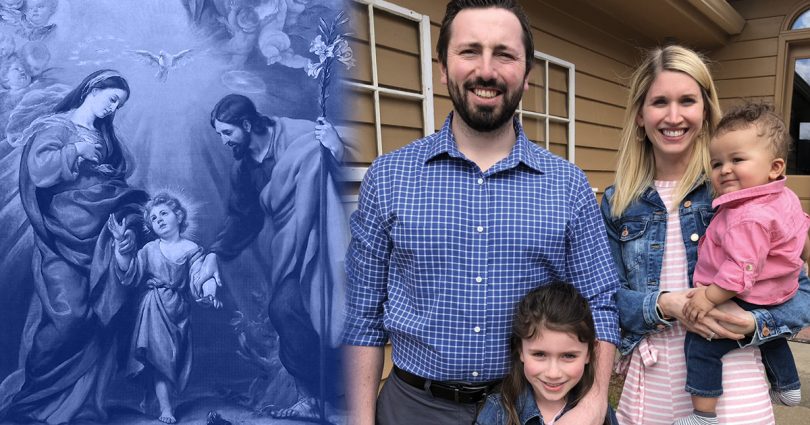 I will tell you something beautiful. We are fighting abortion by adoption—by care of the mother and adoption for her baby. We have saved thousands of lives. We have sent word to the clinics, to the hospitals and police stations: “Please don’t destroy the child; we will take the child.” So we always have someone tell the mothers in trouble: “Come, we will take care of you, we will get a home for your child.” . . . I never give a child to a couple who have done something not to have a child. Jesus said, “Anyone who receives a child in my name, receives me.”

For many scared mothers, unsure of what to do because of a surprise pregnancy, knowing that a couple is willing and eager to take her child into their home and love and treat her like one of their own is an immense blessing. And for the families who adopt, having a child to love and care for is often the answer to years of prayers.

Adoption is a beautiful and wonderful act of selfless love and one that comes with much joy—for all involved.

Mary Ball understands this and had a vision for what she felt God was calling her to do for women facing these surprise pregnancies. In 2001, her vision came to fruition when the nonprofit adoption agency she created got its license in Minnesota. It was created to follow in the footsteps of St. Teresa and offer adoption as the loving answer to abortion. Today, Holy Family Catholic Adoption Agency is the only Catholic adoption agency in the Archdiocese of St. Paul/Minneapolis.

For years, Mary prayed outside abortion clinics. She prayed for the safety of both the mom and the baby, and she prayed that the mother would change her mind and not go through with the abortion. She believed taking adoption to the sidewalk outside abortion facilities could help the abortion-minded mothers know of the love of the adoptive couples who want to help them and who would be ready to adopt the baby if the mothers so choose. The offer of adoption reminds the mother of the value of her baby’s life. 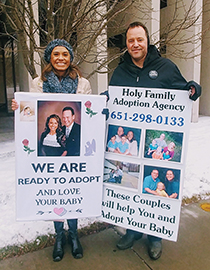 Scott and Adrian witness outside an abortion facility

Over the last few years, adoptive couples from Holy Family Catholic Adoption Agency have prayed outside abortion facilities offering their love and support and saying honestly and wholeheartedly, “We will help you and adopt your baby!”

Mary’s vision of an adoption agency centered around her Catholic faith. Therefore, she asks the prospective parents to strive to live by the teachings of the Catholic Church. She encourages them, when practical or possible, to pray before the Blessed Sacrament, make frequent confessions, and attend daily Mass. In addition, all families undergo extensive home studies before they are approved to adopt.

Knowing that her child will be placed with a loving family so rooted in their faith brings solace and joy to mothers as they weigh this very difficult decision.

Mary told Celebrate Life Magazine a beautiful story about praying in front of an abortion clinic with a prospective adoptive mother. As a young woman walked into the clinic, this woman said to her, “Jesus loves you, and I would love to adopt your baby.” The girl dashed through the door, but then a few minutes later came back outside. She approached the woman and Mary and asked if what she said about adoption was true. The prospective adoptive mother assured her that she would love to adopt her baby. This interaction caused the abortion-minded mother to think about the humanity of her baby and to realize that she could not go through with the abortion. Because the man with her didn’t want her to place her baby in adoption, she ended up keeping the baby. Mary and this woman praised God for a life saved!

The University of Notre Dame sits in beautiful Notre Dame, Indiana, adjacent to South Bend. Across the street from Notre Dame is St. Mary’s College—Mary Ball’s alma mater. Her father taught chemistry at Notre Dame. Because of her roots in this college town, Mary felt called to open a second adoption agency. After much prayer, and after conversations with pro-life professor and mentor Charles Rice (then a professor at Notre Dame’s law school), Mary took a leap of faith and applied for licensure in Indiana. Her dream was to have a symbiotic relationship with the students at ND as she proclaimed her message of adoption.

This was not an easy task, however, as it took four years to get a license in Indiana. Mary attributes the fact that she finally obtained the license to the power of prayer. In 2013, Holy Family got its license.

Two years later, Mary left Minnesota to move to South Bend to run the agency full time. Today, she has two employees in Minnesota and one in Indiana who work part time with her.

A night to celebrate adoption 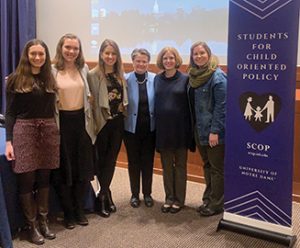 Notre Dame students Ellie Gardey and Veronica Maska pose with Mary Ball (4th from the left) and the women who spoke at the event.

Since then, Mary has worked extensively with ND students in both the Right to Life club and the Students for Child-Oriented Policy club. Both groups advocate for the right to life of preborn babies, but SCOP goes beyond that. According to its website, SCOP “advocates for children by promoting marriage, education, and adoption and defending against the harms of pornography and drug/alcohol abuse.”

These student groups are integral in sponsoring adoption events on campus to help promote an understanding of adoption. They held the first event in 2015 as a key part of Pro-Life Week. At that time, two women spoke: one who placed a baby for adoption and an adoptive mother. In 2017, the same women from 2015 returned to speak again.

On February 19 of this year, Holy Family, in conjunction with ND students from both groups and the campus Knights of Columbus group, held another adoption event at the University. This event featured two birth mothers who gave personal testimonies of how and why they gave their babies up for adoption, about the sheer joy they feel knowing that they chose life for their babies, and how blessed they feel that these children now live in good homes with loving families.

These women spoke of their home lives and how they were young when they found out they were pregnant. Both were Catholic, and both were scared about how their families would react. One of the women told the story of how she summoned the courage to tell her mother, who had noticed her crying and behaving differently and had grown extremely concerned about her health. When the young girl told her mom she was pregnant, the mother exclaimed: “Oh thank God! And don’t shed a tear. This is a gift from God.” Immediately the girl’s fear dissipated. After much thought, she decided to give her baby up for adoption.

The other speaker told her sister first that she was pregnant. Her sister comforted her and convinced her to tell her parents, who were accepting and supportive.

Both women spoke about how the loving attitudes and acceptance of their families were key to how they handled the situation and how they helped them make the decision to give their babies up for adoption. Though both admitted feeling sad, they knew adoption was the best thing for them. They said their sadness eventually turned to joy—a joy they still feel today—because they know they made the right choice.

This year, the students generated a lot of excitement about the event and publicized it throughout campus. They created posters to put in the buildings and table-top tents to put on the dining hall tables. They even designed T-shirts that read “Adoption is love” and gave them away at the event.

Around 40 people attended, and the students were pleased with the turnout. They could see the joy apparent in the speakers’ faces as they discussed giving life to their babies. The students hope that the awareness the event brought will help other students who face surprise pregnancies.

At the event, a student asked one of the speakers for advice about what to do if they encounter someone on campus who is pregnant and scared. The response: Listen and love.

And that is what Mary does best. She told Celebrate Life Magazine the story of a phone call she recently received from a young girl who was scared and pregnant. Homeless and with no family support, this young girl reached out to Mary. Mary listened to her story and then congratulated her for being a good mom and putting her baby first. The girl’s boyfriend wanted her to get an abortion, but the girl felt conflicted. Mary told her how much her baby loves her. She spoke to her about the tiny life growing inside of her. The young girl began to see her baby as a human being, not as a problem or a lump of cells. Mary helped this young girl move into a pregnancy help center, where she currently lives. Though she was considering adoption at first, she is now contemplating raising her baby on her own.

Sadly, adoptions in America are declining. According to 2014 statistics, only 18,000 children under two years of age were placed with adoption agencies. Conversely, there were nearly a million abortions that year. Mary hopes that her agency can help expectant mothers understand the sanctity of the life she’s carrying. And while she understands that adoption can be expensive, she does not want the cost to prohibit a couple from seeking to adopt. Through generous donations from pro-life donors and people who truly believe in her mission, Mary can keep the cost of an adoption very affordable.

These donations are often blessings that come at the most perfect times. Mary proudly relates the story of a donor who was so impressed with an article about Holy Family Catholic Adoption Agency in a 2014 issue of Celebrate Life Magazine that she put the magazine in a table drawer intending to send a donation (See “Holy Family: A Radically Different Adoption Agency and Its Extraordinary Results” in the November-December issue of CLM.). She forgot and life went on, but when she found the article a couple years later, she decided she still felt called to send a donation. So she sent $5,000! Mary received this check at a time when the agency desperately needed the funds, and she knew it was an answer to her prayers.

The Holy Family website features beautiful pictures of families and has a caption that reads: “Adoption is the loving answer to abortion.” Mary Ball strives to teach the students and the community this lesson every day. Her efforts and her love for babies and their moms prove she is truly putting St. Teresa’s words into action: “Please don’t destroy the child; we will take the child.”