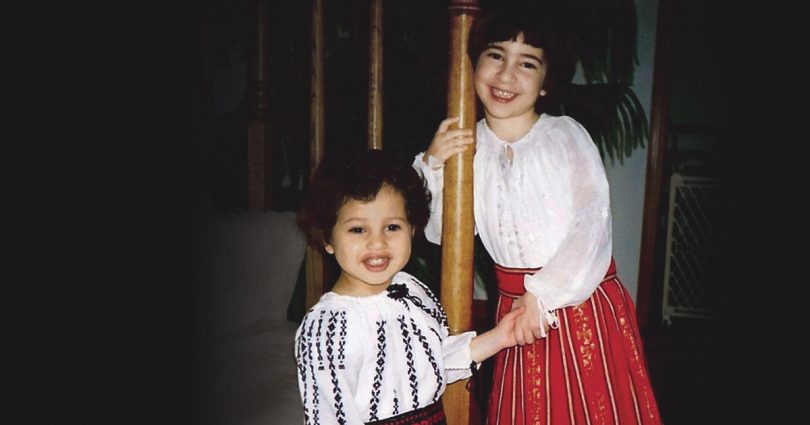 The challenges and joys of adoption

Twenty years ago, my husband and I put our faith in God as He led us on an unbelievable journey. We packed our bags and flew to Romania because we wanted to adopt an orphan. In a country the size of Oregon, there were over 500 orphanages overflowing with children.

When Patrick and I walked through the orphanages, we were shocked. There were countless rows of dilapidated metal cribs, with chipped white rails the children clung to as if they were prisoners. I felt as if we’d just stepped into a cloning factory. Each bed cradled a child wearing tattered clothes, lying on a soiled, damp, and putrid mattress without sheets or blankets. Some of the children were covered with sores or bugs, and a variety of animals wandered freely down the halls. There were no medications for those who were sick. The children rarely got milk. Most were given a bottle of cold chamomile tea. There were no toys, and the children rocked silently in their cribs because there was no one to love and nurture them.

The Romanian economy was in dismal shape. There were jobs, but the workers could barely provide the basics for their families. Store shelves were empty and bread lines were long. It was heartbreaking to witness such extreme poverty. With great difficulty, we focused on our reason for being there: to adopt.

Both the United States and Romanian governments required a mountain of paperwork to be completed before any child could be adopted. We worked feverishly on the stack of necessary forms. Our biggest regret is that we didn’t get approval to adopt more than one child. If we’d only known how desperate the orphans were, we would’ve asked to adopt more. Completing the documentation was backbreaking and overwhelming, because each set of documents had to be copied, translated, notarized, and certified. And that required many trips to various places. It wasn’t long before we doubted we had the strength to adopt even one child. For every step we took forward, we had to take two steps backward—and we wondered if we’d be going home empty-handed.

When we were consumed in turmoil, thoughts of the Virgin Mary traveling to Bethlehem to give birth to Jesus surfaced. Mary must’ve wondered about the arduous trip she was making with Joseph. Did she question God as much as we, at times, were questioning Him? Newfound strength grew from remembering Mary’s confidence in God, and Pat and I felt Him beside us, guiding us during the five weeks we spent in Romania.

But it’s hard to have blind faith. There were times when we still felt confused and doubtful.

During quiet moments in Romania, I recalled stories and prayers from my youth that provided the answers I needed to continue with the adoption process. Was it a coincidence that I remembered those prayers and biblical stories from the past, or did God whisper them in my ears, letting them seep into my subconscious? Those dreams and memories moved me, but when even those weren’t enough to give me the spiritual strength I needed, God allowed us to witness a miracle.

On May 20, 1991, on the outskirts of the city of Buzau (near the Danube Delta), Pat and I spent the entire day driving from one village to the next in search of an adoptable child. We learned many of the orphans weren’t adoptable because their biological parents had refused to relinquish them, in hopes of eventually taking them home. We were very discouraged. To complicate matters, the government was preparing to impose a moratorium on all adoptions while it formulated new adoption regulations, so we had only a few days left to pull an adoption plan together.

We prayed as we trudged along. That’s when an image of the Virgin Mary appeared on what seemed like a minuscule transparent movie screen over my eyes. Thinking my mind was playing a trick on me, I tried to blink it away. No matter how many times I batted or rubbed my tired eyes, the image of Mary wouldn’t disappear. I could neither understand nor absorb the magnitude of it. Our road trip was winding down and we had no prospects of a child to adopt, yet we were in a country with thousands of orphans. Nothing was making sense. All we could do was trust in God. And then, inexplicably, things suddenly began to fall into place.

In retrospect, the entire ordeal was a miracle, but I didn’t see it that way 20 years ago. Back then, I wondered how, with little money in our pockets, we would be able to overcome the language barrier, scads of bureaucratic red tape, and numerous other roadblocks. We were engulfed in a chaotic foreign adoption process.

On the same day, when we least expected it, we got a phone call from the Romanian lawyer we had hired. She had identified an adoptable child, whom we didn’t hesitate to accept. We hailed a taxi during a torrential rainstorm that night, to take us to an unknown destination in order to become parents. The driver spoke only Romanian, and we were chilled to the bone, soaking wet, tired, and hungry.

For an instant, I longed to be in a bright, clean American hospital where a nurse would hand us an infant wearing a soft, cuddly terrycloth outfit. But when I realized our experience was going to be dramatically different, I also realized that all of the pandemonium we had endured in Romania was more than worthwhile.

Our child, born that very day in Buzau— in humble circumstances, surrounded by animals wandering about and wrapped in swaddling clothes—was placed in my arms. Even though I could no longer see Mary, I could feel her love for me burn like a blazing fire in my heart, warming me from head to toe, joined with the blazing love I felt for our newborn daughter, Juliana. I couldn’t help but think about what Mary must have experienced when she held Jesus for the first time in Bethlehem. And I wondered how I could ever have doubted God.

God helped me to recall that Jesus wasn’t born in a palace, but in a meager, earthen manger surrounded by animals, and when the Virgin Mary needed help, no one in Bethlehem gave her any. Yet, she had faith that God would take care of her somehow. And He did! Just as He took care of us.

The search for a sibling

The first year with Juliana was the best year of our lives. She and the other miracles we received were amazing gifts from God. We felt truly blessed. And not long after Juliana learned to speak, she inquired about a sister she thought she had. Though the adoption experience itself had been challenging and tedious, we believed God wanted us to do it again.

At that time, wanting to “give back” to Romania, Patrick and I were packing boxes of aid materials to be shipped there, not knowing they were all going to the orphanage in Buzau. We inquired about a sibling each time we sent a shipment, and each time we received the same discouraging response: Juliana had no sibling there. But the news didn’t impede our giving. Juliana helped fill boxes with formula, clothes, and toys. She hugged the stuffed animals before tossing them into a box—declaring they were for her sister.

Within three months, Patrick and I returned to Romania to search for Juliana’s sister. We never found a biological sibling, but we did identify an adoptable child at the orphanage in Buzau, with big brown eyes and soft curls spilling across her forehead. Andrea was surrounded by the toys Juliana had sent in previous months. “This has to be the child Juliana was telling us about,” I told Patrick. When I held her tiny, frail body in my arms, I knew our family was complete. We’d been taking care of our baby through constant shipments of supplies, without knowing that she was “ours.” God really does work in mysterious ways!

We had trusted God to find Andrea, and we also had to trust Him to get us all home. Because of the stricter adoption laws that had just been implemented, only five lucky children were supposed to be granted American visas to leave Romania, but Andrea was number six. When we presented her adoption paperwork at the U.S. embassy, we were surprised when Mr. Smith issued it so easily. When we adopted Juliana, obtaining the visa was the toughest part of the process.

We returned to the embassy on our departure day to thank Mr. Smith for expediting the issuance of Andrea’s visa, and because he had been so kind and friendly to us. Much to our surprise, we learned that Mr. Smith hadn’t been there when her visa was issued. He was on vacation, scheduled to return in several days. Not wanting to cause trouble, we immediately left.

As we boarded the plane, we concluded an angel had issued Andrea’s visa. God wanted us all to become a family, and He made sure it happened. “You, yes You, O Lord, my God, have done many wondrous deeds! And in Your plans for us there is none to equal You. Should I wish to declare or tell them, too many are they to recount” (Psalm 40:6).

Barbara Canale writes from Jamesville, New York, where she lives with her husband, Patrick. She has had eight stories published in the Chicken Soup for the Soul book series and coauthored a book with Patrick (Our Labor of Love: A Romanian Adoption Chronicle). Juliana is a senior at Cornell University in Ithaca, New York, studying food science. Andrea is a junior at Nazareth College in Rochester, New York, studying speech therapy.

Barbara Canale writes from Jamesville, New York, where she lives with her husband, Patrick. They have two beautiful daughters adopted from Romania (see our November-December 2011 issue). She has had 11 stories published in the Chicken Soup for the Soul book series and just completed Prayers, Papers, and Play: Devotions for Every College Student, soon to be released by Liguori Publications.