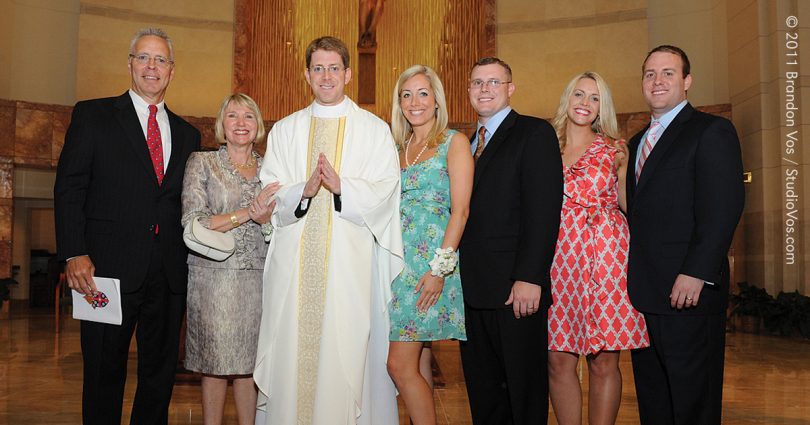 When Victor (hereafter referred to as Vic) and Karen Perez’s son was ordained a Roman Catholic priest on June 4 in the Archdiocese of Galveston-Houston, Texas, the Perez family was all together and shed tears of joy at this blessed moment. Everyone, that is, except the oldest sibling. However, Vic and Karen believe that the child they named Joseph Manuel was with them in spirit, and that his presence filled the cathedral-and their hearts-with gladness rather than sadness.

Joseph is the child and sibling the Perez family never had the privilege of knowing on this side of eternity. Karen is convinced this baby was a boy. Thirty-seven years ago, his life was taken through an abortion, which his parents now deeply regret. But the resulting agony they suffered gave way to the ecstasy of watching another son become a servant of the Church.

Today, there is consolation in knowing that this child of God paved the way for a priest of God-his brother, Victor (named after their father). “I just know that Joseph is up there interceding, Karen said emphatically, from the family’s 64-acre farm near Katy, Texas. Joseph is a part of our family. It’s kind of a mystery how God has brought good out of it [the abortion], Victor reflected. I get strength from [Joseph] when I pray to him [ask for his intercession], and I have a sense that he’s praying for me.”

It was late 1974. Karen was 22 years old, recently married and fresh out of college. She was holding down two jobs to help Vic attend graduate school at the University of Texas at Arlington. Complicating her life at that time were problems with relatives and the news that she was pregnant. In her mind, there was no room for a baby in this young couple’s struggling household. She felt confused and overwhelmed.

On January 22, 1973, the Supreme Court had decriminalized the killing of preborn children nationwide. Deep in her heart and soul, Karen knew that what was inside of her was a tiny living human being, but she and her husband rationalized that their circumstances were not conducive to a child. “My earthly family had let me down,” Karen said. “We had no money.” And Karen told herself abortion must be okay because the Supreme Court had now said so.

Admittedly marginal Catholics then, Vic and Karen weren’t attuned to Church teaching on the sanctity of life. Without informing anyone else, they made the decision to go ahead with the abortion at the Planned Parenthood facility in Arlington. “I remember the doctor did not look at me at all,” Karen said. “I knew and he knew that what we were doing was wrong.”

Karen went home and figured she would erase her memory of that awful day, believing her “problem” was then solved. But as she watched the evening news that day, there was a report on pro-lifers marching in Washington, D.C., on the second anniversary of the Roe v. Wade ruling. January 22-of all days to have an abortion! “The thought went through my head, ’God will never let me forget the day I killed my baby,’” she recalled.

And so, just a few hours after Karen’s abortion, those images of prayerful pro-life protesters had already galvanized thoughts about the serious ramifications of her actions. Within a week, she and Vic sought out a Catholic priest for confession, though neither of them was actively practicing their faith. That was the beginning of a long journey. As is often the case with post-abortive women, her emotional healing process would take years.

Four years after the abortion, God blessed Vic and Karen with the birth of Victor. That’s the time I started thinking, “Oh my gosh, what I had killed was a baby! That was Victor’s sibling,” Karen said.

Two more children, Nicolas and Caroline, followed Victor. On the surface, life seemed to be going well. But inside, Karen was still wrestling with her conscience. “We had gotten back with the Church then,” she explained. “But we would be at Mass, and I’d look down the row at the three kids and [notice] how much they looked alike. Then the thought would come to me, ’What did their sibling look like?’”

Those thoughts wouldn’t go away. “I didn’t have a good viewpoint of what God was really like,” Karen said. “It was like if I work really, really hard to become this good Catholic, then I’m protecting my children from God taking them. I thought He would take one of my healthy babies to pay me back. In doing post-abortion counseling later, I found that’s a very strong undercurrent with post-abortive women.” Karen experienced other symptoms of post-abortion trauma as well.

The Perezes experienced a significant deepening of their faith when Victor was in third grade, and over time, Karen committed to regular adoration of the Blessed Sacrament. “I attribute a lot to that freeing the shackles of my abortion,” she said. But she still wasn’t totally freed, because when Victor turned 16 and started driving, she worried that God would “repay” her with a car accident.

Karen went to a local priest, Father Joe Crosthwait, for guidance. “He said, ’You have got to stop confessing this. God has forgiven you,’ she said. It was the first time anyone ever referred to my abortion as a baby. It was painful. He said, ’You need help.’”

She then attended a three-month post-abortion healing program called Forgiven and Set Free. “There’s a real power sitting in a room with other women who had abortions, being led by women who had abortions and sharing our stories-putting the pain into words for the first time and having someone else know exactly how we had felt,””” she explained. At the memorial service held when the program ended, Vic and Karen named their child Joseph in honor of Jesus’ foster father and Father Joe. Karen felt truly forgiven and completely set free at last.

Karen recounted instances when the children seemed to sense they had another sibling. Once, when she grounded Victor, he told his mom that he wished he weren’t the oldest. And she remembered Caroline talking about a dream in which Karen was pregnant and the baby’s name was Joseph.

When Victor was an undergraduate at the University of Texas in Austin, Vic and Karen gathered their three living children together to tell them Joseph’s story. “The five of us cried, Karen recalled. “It was healing. It was beautiful. And Victor’s comment was, ’I always felt like I wasn’t the oldest.’”

With the shackles of the past removed, Vic and Karen committed themselves wholeheartedly to pro-life work and communicating their experience to others. They have assisted crisis pregnancy centers and prayed in front of abortion mills, and they serve on the Houston Coalition for Life’sBoard of Directors.

Karen has recounted her moving story for countless church and women’s groups, for confirmation classes, at prayer vigils and in rural Texas towns. Six years ago, Karen became the Houston-area coordinator for the Silent No More Awareness campaign (see also Celebrate Life, May-June 2009). Since joining Silent No More, she has organized a joint prayer vigil with the Houston Coalition for Life outside Planned Parenthood’s monstrous 78,000-square-foot facility in Houston during this late-term abortion mill’s annual fundraising luncheon.

“Those of us who are Silent No More are there on the front lines to share our stories, with the hope that we will be able to prevent others from making the decision we did,” Karen explained. “When I stand in front of Planned Parenthood with my husband, we say to those young couples walking up, ’Please don’t make the decision we did 35 years ago.’ I know if there had been someone outside of the clinic when I went in, it could have changed the course of my life.” Karen also draws upon the emotional trauma of her ordeal to encourage post-abortive women and men to seek counseling and reconciliation, and to speak out through Silent No More.

Father Victor felt called to the Catholic priesthood after studying in Spain and visiting the shrine of Our Lady of Fatima in Portugal during his junior year in college. His spiritual journey has evolved from “when I was going away from God” in college to devoting his life completely to God and the spiritual well-being of souls.

One of the gifts he has received, he said, is an ability to show compassion for others. “The way I found my vocation is [through] experiencing God’s mercy in my life,” he said. “I’m really excited and just so grateful for His call. God’s mercy has been so great. [The abortion] will impact my ability, in the priesthood, to show mercy. “Father Victor credits his parents’ powerful witness for playing a key role in his vocation decision.

“I feel that God took my torn heart and healed it with His forgiveness and grace,” Karen said. “He blessed us abundantly by Victor’s vocation to be a priest. It’s like the whole thing has come full circle. Not only was I not infertile after an abortion, [but]… our marriage survived-we have celebrated our 37th anniversary-I think God blessed us with that…

“And we know that Joseph watches over us and he prays for us. We know we will be reunited in heaven.”

The largest audience Karen Perez has shared her testimony with thus far was at Houston’s Unite for Life event, held last October 23. This pro-life rally and march brought together, for the first time, 32 local pro-life groups for massive grassroots mobilization against the city’s enormous new Planned Parenthood facility. Over 1,500 participants walked together in a peaceful, prayerful procession to the late-term abortion mill. Karen, who represented Silent No More, was one of four speakers, including keynoter Eduardo Verastegui, star of Bella (see Celebrate Life, Fall 2010). Victor brought along the Seminarians for Life group that he started while studying at Houston’s Saint Mary’s Seminary, as well as two busloads of young people from his parish. “It was very emotional for me, since I could see Victor in his [deacon’s] collar standing there with my family,” Karen recalled.