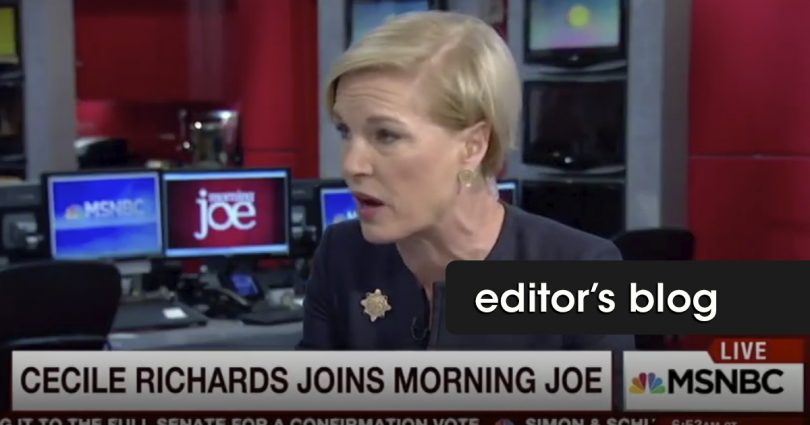 Richards’ job is to spread the false narrative that Planned Parenthood is a crucial and indispensable organization that serves women nationwide by providing them with basic healthcare. The purpose for spreading this false narrative is to trick people into seeing a beautiful façade on the outside of the nation’s largest abortion chain that slaughters over 300,000 preborn children every year.

Cecile Richards works hard to spread this false narrative in a twofaced manner, namely, as the president of a pseudo-healthcare provider (PPFA) and the president of a political lobbying machine (PPAF; see here). This allows Planned Parenthood to be a nonpolitical “healthcare provider” on the one hand, and an entirely political machine on the other; naturally, aside from what’s on paper mostly for tax purposes, there is no actual distinction between the two entities…Cecile Richards runs them both!

Now we come to an interesting segment on MSNBC’s “Morning Joe.” While giving her spiel on the show, Richards casually told a lie so boldfaced that one begins to wonder if she was trying to do comedy. What was her lie? Richards said that Planned Parenthood is nonpartisan…did you catch that? According to Richards, Planned Parenthood is NONPARTISAN!

Planned Parenthood endorsed Hillary Clinton in the presidential primary (see here), spent around $38 million dollars to promote Hillary and pro-abortion Democrats (see here), and made sure that Cecile Richards spoke at the Democratic National Convention where Hillary Clinton accepted the nomination to run for president (see here).

How much more partisan could Planned Parenthood be?

This boldfaced lie about being nonpartisan is so ridiculous that it needs a laugh track. So, without further ado, I give you my new and improved version of this segment on “Morning Joe” with an added laugh track and a few sound effects: