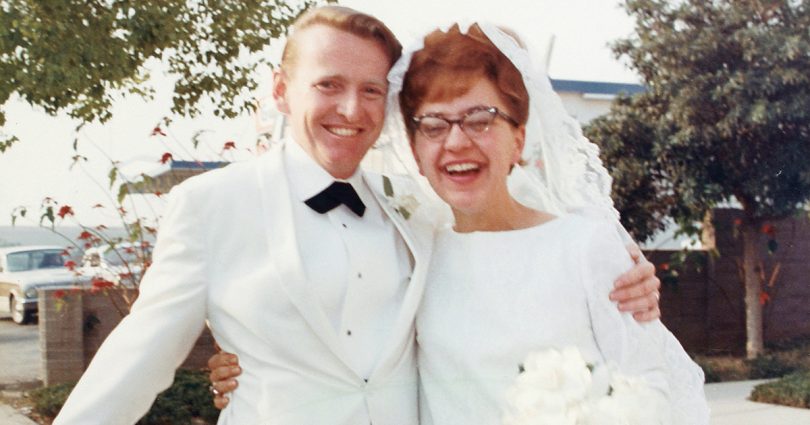 Over the past 40 years of our marriage, my husband and I have been witness to the glorious hand of God in our lives. We have also looked back at some of the truly sad choices we made, not only out of ignorance, but also because we did not carefully pursue the complete truth. The most egregious of these, in my mind, was our decision to use the intrauterine device after the birth of our firstborn child.

The story goes like this. Paul and I had only been married a couple of months when we, as non-practicing Catholics at the time, decided to go to a doctor and see about the birth control pill for me. After all, we were in debt up to our eyeballs and wanted breathing room so that we could get our financial house in order.

However, God had other plans. When I went to see my obstetrician and explained what I wanted, he said that before he could write a prescription he would have to do an exam. Well, you cannot possibly imagine my surprise when he soberly said, “Your decision to use birth control pills is a bit late, Judie. You are already pregnant.”

That was in February of 1969 and cell phones did not exist, so I had to wait until I got home to call my husband at work! Shock is a mild word to describe his comments when he heard the news. Neither of us expected to hear those words and it took a couple of days for us to realize that we were not only already parents, but very happy about it.

Return to the Church

Before long, our son was born in November of that year and I dutifully went back to the doctor. But by that time, several things had happened in our lives.

First and most importantly, we had decided that we should indeed start going to Mass and practicing our Catholic faith. So we went to see the local parish priest and went through the process of examining our consciences. Next, we went to confession and started the process of relearning Church teachings and attending Mass.

Even though we had returned to the Church, we were still uninformed and unformed in our faith. As a result, Paul and I again wanted to use birth control. But before seeing the doctor, we talked with our pastor about it. By that time, I had done some research and knew that there were many problems connected with the birth control pill. I shared what I had learned with my husband and we decided on the IUD, but did want to discuss this decision with our pastor and this is where it gets very interesting.

Our pastor did not mention anything to us about Church teaching. In fact, he assured us that we should not be concerned at all. He said we had good reason to want to postpone another pregnancy, particularly because the doctor had expressed concern for my health and thought that we should wait at least two years before attempting to have another baby. Now, mind you, our pastor was a very intelligent, well-read man and we had no reason to believe that he was withholding the truth. Yet our pastor did not even allude to the existence of the newly released and definitive papal encyclical, Humanae Vitae.

So, I went back to my Catholic obstetrician and told him that my husband and I wanted to use the IUD rather than the pill. No problem!

Fifteen months later, I returned to my doctor and asked him to remove the IUD. After all, Paul and I had decided that we should be open to having another child. Looking back, I realize that while the IUD was in place, I felt severe cramping at certain times of the month and an inordinate amount of discomfort. Yet I really cannot understand why I never equated those symptoms with the IUD.

After the birth of our second child, a beautiful daughter, I once again asked my doctor for the IUD. But that time it caused serious pain and so I had to have it removed.

That was early in 1972, right around the time that we moved to Georgia, became volunteers for Birthright and began learning about the efforts to decriminalize abortion in Texas and Georgia.

From Georgia, we went on to North Carolina, where our third child was born. Next we moved to Washington, D.C., where I became deeply involved in the prolife movement and began to learn about Catholic teaching relating to matters of human sexuality.

My greatest teacher during this period was Father Paul Marx, OSB, the founder of Human Life International. Father Marx led me to read Humanae Vitae by Pope Paul VI and to study it. Because of Father Marx, my eyes were opened to the truth. The truth sets us free, but sometimes it is painful. Because I had used birth control, I went into a tailspin of horror and sadness.

It became clear to my husband and me that the choice we had made was not only intrinsically evil, but had probably resulted in the deaths of—only God knows— how many of our preborn babies. It is something we will never know in this life, but the very idea that early abortions may have occurred in my body is still—to this day— one of the most devastating facts about my life. The very idea of what may have happened was enough to make me feel guilt that I still cannot describe without shedding tears about it.

Of course, I had a very lengthy discussion with Father Marx about this and he assured me that I could not be guilty of a sin I never knew was a sin. Nevertheless, I confessed it.

Message to the human family

Our conscious decision to use the IUD became one of the experiences in our lives that God has used to help us teach others. He brought us through it with His mercy, grace and love. It is precisely because of this experience in our lives that I never take it for granted that someone to whom I speak, write to or otherwise communicate with, understands the grave nature of using contraception and the grisly facts about how the most popular methods of contraception really work.

While this may sound like an oversimplification to many, I certainly do not perceive it that way. My goal in life is to make certain that people understand that abortion is an act of murder. Short of grave reason, I want everyone to understand that anything a couple does to thwart the creative will of God in marriage is harmful to their spiritual, emotional and even physical well-being.

I have been there and I have suffered those consequences. I believe, to this very day, that the IUDs I had in my body not only created the opportunity for abortion and infection, but may well have been the underlying cause of the ovarian cancer that I had in 1981. I believe it is a miracle that I survived. So the very fact that I survived has made me more of a zealot when it comes to educating people on the subject of birth control.

My personal experience has become the perfect opportunity to teach the beauty of God’s gift of human sexuality and the remarkable blessing of procreation within marriage. I often wonder how things might have been if only a holy priest had counseled us prior to our marriage and if, as the years unfolded, we had benefited from that same counsel when the ideas we had did not coincide with what the Church teaches. There is no doubt in my mind at all that God’s perfect plan for marriage is based on a couple’s desire to surrender every aspect of their marriage to Him with trust and in prayer. We are living proof of the joy that such a relationship with God brings to marriage. I only wish we had known 40 years ago what we know now.

I am a crooked line. Therefore, every day when I pray, I ask God to do the best he can with this piece of clay that is Judie Brown. Am I imperfect? You bet! But I am also grateful beyond measure for God’s grace in my life. I thank Him with every fiber of my being for my husband, my three children and my 11 grandchildren. Most of all, I thank God for His grace.

SIDEBAR: What the Church teaches about contraception

“The direct interruption of the generative process already begun and, above all, all direct abortion, even for therapeutic reasons, are to be absolutely excluded as lawful means of regulating the number of children. Equally to be condemned, as the magisterium of the Church has affirmed on many occasions, is direct sterilization, whether of the man or of the woman, whether permanent or temporary. Similarly excluded is any action which either before, at the moment of, or after sexual intercourse, is specifically intended to prevent procreation—whether as an end or as a means.

“Neither is it valid to argue, as a justification for sexual intercourse which is deliberately contraceptive, that a lesser evil is to be preferred to a greater one, or that such intercourse would merge with procreative acts of past and future to form a single entity, and so be qualified by exactly the same moral goodness as these… Consequently, it is a serious error to think that a whole married life of otherwise normal relations can justify sexual intercourse which is deliberately contraceptive and so intrinsically wrong.” (Humanae Vitae, Section 14)