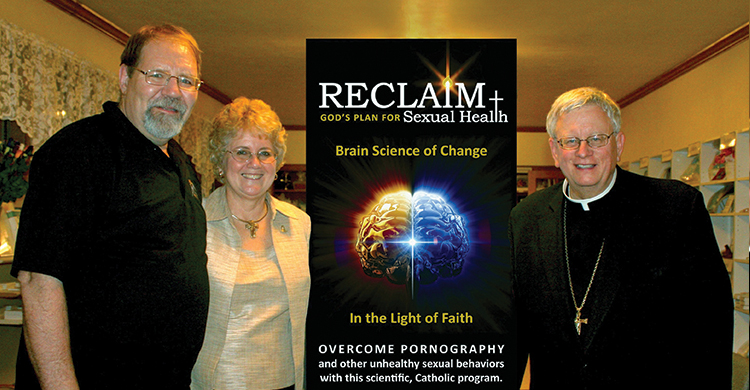 “We know that in everything God works for good with those who love Him, who are called according to His purpose” (Romans 8:28). Few know this better than Bruce and Jeannie Hannemann. They founded Elizabeth Ministry International (see Celebrate Life, January-February 2012) in 1991 “to offer hope and healing for women and their families on issues related to the joys, challenges and sorrows of childbearing,” according to its original mission statement.

Elizabeth Ministry became the Hannemanns’ lived experience of Romans 8:28, for they had coped with infertility, miscarriages, complicated pregnancies, a child born with special needs, and other childbearing complications, which served as the impetus for creating a parish-based support system for others facing similar situations. They have started over 700 Elizabeth Ministry chapters on six continents.

At its founding, Bruce and Jeannie had no idea that their organization would one day also help those who struggle with unhealthy sexual behavior.

This expansion of Elizabeth Ministry also fulfills what is promised by Romans 8:28 because, for many years, Bruce was addicted to pornography. When he was nine years old, he stumbled upon his father’s pornography. When his father found him looking at it, he said, “It’s a man thing. Don’t tell your mother that it’s here.” And so the secrecy began.

Bruce was shy as he grew up, and pornography allowed him to create relationships in a fantasy world where he didn’t have to worry about being socially acceptable. What he didn’t realize was that pornography use was manipulating his brain chemistry. It releases high levels of dopamine,1 which leads to erratic behavior and compulsions.

Dopamine is just one of the neurochemicals that pornography viewing releases like a tidal wave. This flood of natural drugs creates a tremendous “high” used for escape and self-medication.

God designed them to help spouses bond with each other, but through pornography use, Satan distorts their purpose to make people slaves to the flesh. Even though Bruce wanted to stop the immoral behavior, the urges soon began overcoming his willpower. He was leading a double life.

Bruce and Jeannie grew up in the same neighborhood and had been friends since childhood. During their college years, they began dating and Bruce eventually shared his internal struggles. Neither understood the addictive nature of pornography and thought the problem would go away once they were married. It did not.

Early in their marriage, they began receiving counseling for Bruce’s compulsive use of pornography. Over the years they utilized all of the resources available, including in-house treatment. The focus of the therapy and other treatments was always on restraining the urge to engage in unhealthy sexual behavior, and the “white-knuckling”2approach would help for a time, but relapses continually occurred.

When Internet pornography became available, Bruce’s problems worsened. He began to isolate himself from family, friends, and coworkers as he became dissociated from real life. His thinking and moral reasoning had become so compromised that he had trouble communicating and making decisions.3 He was at risk of losing his job and his marriage.

Finally, by the grace of God, Bruce and Jeannie discovered a breakthrough approach to recovery from pornography addiction. It didn’t focus on restraining but instead on literally retraining the brain. Recent discoveries in neuroplasticity4 created an awareness that made this approach possible. Bruce became the third person in the world to enroll in an innovative, professional, science-based online recovery program that showed them the truth about the brain chemistry of pornography addiction and exactly how to break free from it.

Bruce was also blessed with a spiritual director who aided him in incorporating Catholic practices into his brain recovery training. Using the computer—formerly used for evil purposes—they reprogrammed Bruce’s brain, enabling him to walk the path to purity and sanctity. For the first time since he was nine years old, Bruce was free from the pull of pornography!

The program also provided Jeannie with the support that had been missing throughout their struggle. She was now better able to understand Bruce’s problem, and received the hope, help, and healing she needed.

The Hannemanns’ local bishop, the Most Reverend David L. Ricken of the Diocese of Green Bay, Wisconsin, was enthralled with Bruce and Jeannie’s story, and investigated this new online recovery program. It was developed over a number of years by a team of experts in mental health, addiction recovery, neuroscience, and online technology, and since Bruce’s healing, it had been tested and proven by thousands of individuals in over 80 countries. Bishop Ricken was so impressed that he put a direct link to it on the diocesan website and encouraged the Hannemanns to share their story in order to help others striving to conquer unhealthy sexual behaviors.

Eventually, under the bishop’s guidance, Elizabeth Ministry formed a partnership with the creators of the online recovery program. Incorporating use of scripture, Church teachings, sacraments, and prayer, participants in the Catholic version (known as RECLAiM Sexual Health) experience the full support of their faith during their journey to recovery. It carries an imprimatur and received Bishop Ricken’s endorsement: “RECLAiM addresses one of the most serious attacks being waged on the family today! I have personally asked Elizabeth Ministry to take on this challenge and ask you to do whatever you can to support this vitally important ministry of hope.”

The unique integration of the theology of the body, faith practices, and behavior-changing techniques allow RECLAiM to bring psycho-education (a technique used to both educate and remove barriers to treatment) as well as spiritual direction from a Catholic perspective to those in need. With the light of faith, this online program brings participants to an understanding of God’s original plan for human sexuality as described in the book of Genesis, giving them an opportunity to reclaim that purpose.

Through multimedia training, those enrolled in RECLAiM learn the brain science behind their unhealthy sexual behavior. They learn how to use cognitive-behavioral tools and techniques to overcome it. Affordable online access, always available in a safe and completely anonymous way, gives help to those burdened by fear, embarrassment, and shame. Using a computer, tablet, or mobile phone, each individual receives the ongoing daily training, tracking, accountability, and support they need to achieve and sustain long-term change—whenever, wherever, and for however long it’s needed.

RECLAiM participants receive a daily tracking calendar, daily messages and reminders, access to a worldwide member discussion forum, ongoing assessments, and many more tools for healing. Long-term daily tracking and accountability are essential to lasting change. Because a support system is so vitally important, RECLAiM offers each participant a personal coach and the option to invite other people, such as a spiritual director or therapist, into the recovery process.

Along with the online recovery program, RECLAiM provides books, brochures, confession cards, parish planning guides, posters, CDs, DVDs, and other resources. Speakers are available for seminary and clergy training; keynote addresses; workshops for educators; and presentations to youth ministers, parents, students, and others. The RECLAiM program also goes beyond its own staff to seek input and additional resources from a wide range of experts.

It comes as no surprise that moral standards are slipping, but when Fifty Shades of Grey surpassed $500 million at the box office worldwide, this was a jarring clue as to how far and how fast we’ve sunk. Pornography cuts across every demographic, from Church members to society in general. With the advent of high speed Internet service, it’s now affordable and widely accessible, and can be viewed anonymously by anyone at any age. Internet pornography has been called the crack cocaine of sexual addiction.

As pornography dehumanizes people, it destroys their dignity. Since recognition of the inherent dignity of the human person leads to the recognition of human rights,5,6 the threat becomes clear: Pornography undermines the very bedrock of civilization. Secular studies show that prior pornography consumption may lead to later support for abortion,7 violence and sexual aggression,8 and increased likelihood of extramarital affairs and divorce.9

A message of hope

We have heard a repeated lie: once an addict, always an addict. That’s not true. When Bruce sought help for his pornography addiction, he was repeatedly told there was no cure. That hopelessness also led him to give up repeatedly. But our faith tells us, “No trial has come to you but what is human. God is faithful and will not let you be tried beyond your strength; but with the trial He will also provide a way out so that you may be able to bear it” (1 Corinthians 10:13).

Today, Bruce speaks at men’s conferences, and he and Jeannie are traveling nationwide to spread the good news of hope, help, and healing by offering keynote addresses, seminars, and training sessions. They seek to eliminate shame and encourage people to come into the light of Christ.

Their message is clear: God has already built into the very structure of your brain everything you need to break free. The same brain process that got you into this mess can help get you out, and the RECLAiM program will show you how. As Romans 12:2 says, “Do not be conformed to this world but be transformed by the renewal of your mind, that you may prove what is the will of God, what is good and acceptable and perfect.”

For more information on the RECLAiM Sexual Health program, visit Reclaim SexualHealth.com or call Elizabeth Ministry International at 920-766-9380.  Many testimonials from RECLAiM participants are available on its website.Elizabeth Ministry is a member of American Life League’s Associate Program. To learn more, visitALL.org/associates or call 540-659-4171.

1 “[O]ur brain has a wellspring of self-produced neurochemicals that turn the pursuits and struggles of life into pleasure and make us feel happy when we achieve them. . . . Dopamine is responsible for reward-driven behavior and pleasure seeking. Every type of reward seeking behavior that has been studied increases the level of dopamine transmission in the brain.” (Christopher Bergland, “The Neurochemicals of Happiness,” Psychology Today, Nov. 29, 2012) —Editor

2 “White-knuckling: a recovery term meaning the addict is not using, but has not addressed the root problems that caused the addiction. Often precedes a relapse/slip.” (“Glossary of Terms,” Partners of Sex Addicts Resource Center) —Editor

8 Neil M. Malamuth, Tamara Addison, and Mary Koss,“Pornography and Sexual Aggression: Are There Reliable Effects and Can We Understand Them?,” Annual Review of Sex Research 11, no. 1 (December 2000): 26-91.