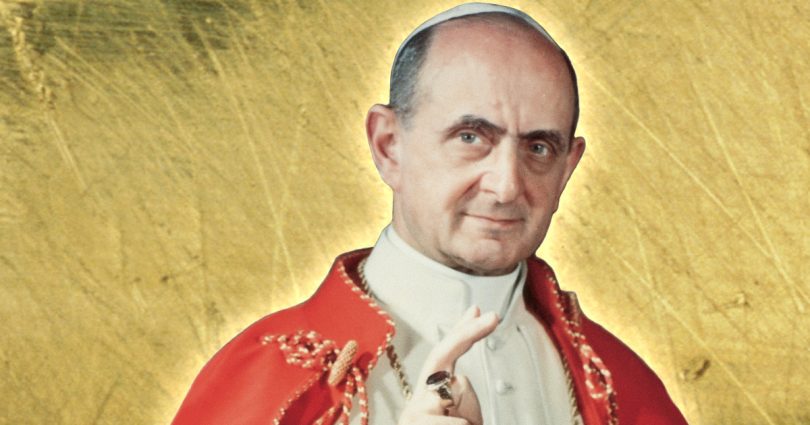 Even if I have to do it alone, this July 25, I will be celebrating the 40th anniversary of Pope Paul VI’s encyclical on the transmission of life, Humanae Vitae, because I believe it is the one document that stands as a beacon of light against the disintegrating attitudes and effects of the culture of death. It is not that this encyclical on contraception represents any new teaching; yet like most Church documents, it is never politically correct but always eternally correct. Humanae Vitae is the antidote to the blindness and negativity of the culture of death that has entered our world like a plague.

Here is a case in point. A friend recently emailed me a portion of a conversation that he tried to have with a family member on the subject: “We have no common ground here [on contraception] at all,” said the family member curtly. “You’re the enemy; we’re not going to talk about this and the stupid Church’s hierarchy.” This attempted dialogue of a believer with a non-believer reveals the pagan world’s blind, unreflecting faith in birth control. The subject of contraception generated not only a blank wall of rejection, but also degenerated into one-sided name-calling, recrimination and unsolicited attacks on another person’s religion.

Conversations like this happen because pills, sterilizations and barriers have simply become a sort of religious fixture in our society. Contraception is a modern idol—accepted as a part of our cultural landscape just as readily as we accept the products of McDonald’s or Burger King in the landscape of downtown U.S.A. These institutions are just there. We do not need to imagine them. They market themselves to us. They are ubiquitous. They are the default consumption habit of our society. Everybody indulges in them, except a few health fanatics!

Similarly, the almost religious doctrine of baby avoidance has so deeply infiltrated the thinking of our society that no family is left untouched by its ideas or the culture that is generated by contraception.

The whining refrain “Why doesn’t the Church just get with the times and change its teaching?” continually crashes down on the Church like a hailstorm on a tin roof and it is equally annoying too. This is the mantra of every secular news commentator and dissenter in our own Church. Therefore, faithful Catholics are often hard pressed to find an answer to the recurring taunt— almost embarrassed at having to defend this teaching. But when all is said and done, it is the Church that should be on the offensive in pressing for an answer to a more urgent and relevant question.

When presented with the “birth control challenge,” faithful pro-lifers must learn not to be intimidated, but rather to turn the tables on the questioners and see if there is some reason why people are so adamant about this practice. One may say, “Okay, I’m glad you recognize that the Church thinks birth control is a bad thing. But before I give you a full explanation, tell me, why do you think birth control is a good thing?” This is a simple, honest question, but it is by no means a comfortable question. The adherents of contraception always respond in one of three ways:

Each of these lines of reasoning is deeply flawed and manifests the inherent blindness of the contraceptive mentality.

“The world is overpopulated” is one of those undigested bits of prejudice that does not hold water any more, since today’s economists are increasingly more concerned about a “baby bust” than a baby boom. Not one of the 47 nations in Europe is replacing its population. Some nations are even paying people to have more children, but still having little success. The same trends can be seen in all but a handful of nations in Africa and Latin America. So the real macroeconomic question today is, what future do these countries have without children? The false compassion for starving children in the third world also tends to blame children for the poverty of underdeveloped societies and masks a deeper racist reaction to the births of poor children. It is a latent feeling that if those people keep breeding, they will somehow come and take away our good life.

The “more contraception, less abortion” argument is perhaps the easiest to answer but the most pernicious to treat, because its adherents adamantly refuse to accept the reality that the people who run the abortion industry are the same ones who run the contraception industry—and they make a killing off both. The prevalence of contraception in a culture only leads to more abortions, not fewer, because it creates a culture of promiscuity, which ripens a society to accept the idea of killing children as “unwanted.” The more illicit unions, the more the need for abortion. It’s that simple. If contraception was supposed to reduce the need for abortion, shouldn’t we wonder why the U.S. still has 1.2 million abortions per year? The fact is that more than half of the women who have abortions nowadays do so because their contraception has failed them, so abortion has become the default backup to failed contraception.

The lifestyle argument is all about people’s perceived need for a designer family that suits the lifestyle to which they have become accustomed. Contraception is the perfect foundation for a secularmaterialistic culture, because it purports to control fertility and therefore to control the circumstances of life. “Be fruitful and multiply!”—God’s first command to the human race—is not seen as a binding directive, because the secular world has taught them to become gatekeepers of life at the expense of their natural vocation to be stewards of it. The justifications for not 20 Celebrate Life July–August 2008 having children range from the seemingly generous ones about wanting to afford college educations for the kids they have to the crass reasons about just not wanting another kid because someone doesn’t feel like getting pregnant again.

All of these arguments derive from the insidious “contraceptive mentality” that the Church so carefully warns us about in Humanae Vitae. This mentality turns the child into a commodity to be considered according to the quality of life that he adds, as opposed to a gift that has value in itself. The Church challenges and corrects this child-negative mindset with her own magnificent vision of marital love. She describes a complete vision of marital love as human, total, faithful and exclusive; she reminds us that this love is also fertile, for it is not exhausted by the communion between husband and wife, but is destined to continue, raising up new lives. As Gaudium et Spes says, “Marriage and conjugal love are by their nature ordained toward the begetting and educating of children. Children are really the supreme gift of marriage and contribute very substantially to the welfare of their parents.”

In the end, there may not be much celebration of Humanae Vitae’s 40th anniversary, but those of us who love life will appreciate its wisdom for a faith challenged generation. The Catholic prohibition of any means of deliberately rendering the marital act sterile goes against our culture’s default mindset of baby-avoidance, but the teaching itself is not sterile! Those who follow the wisdom of Humanae Vitae and remain “open to life,” keeping their marriages free from the blindness and degradation of contraception, will be the ones who transform not only their own families, but also the entire culture in which we live.

Rev. Thomas J. Euteneuer is president of Human Life International. All priests are invited to sign up for the newsletter Humanae Vitae Priests at HumanaeVitaePriests.org.