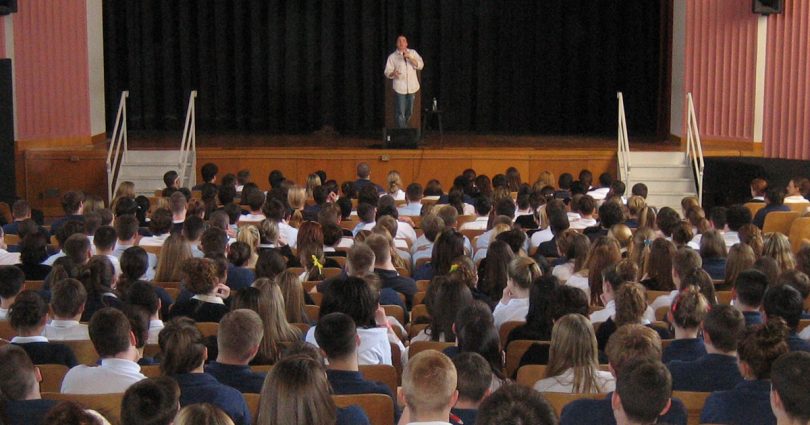 Jason Evert and his wife, Crystalina, are speakers and authors for Catholic Answers based in San Diego, California. Jason earned a master’s degree in theology and undergraduate degrees in theology and counseling from the Franciscan University of Steubenville, Ohio. He has written nine books, including If You Really Loved Me, Pure Love and Theology of the Body for Teens. He and Crystalina also host The Pure Life on EWTN.

Jason speaks mostly at high schools, universities and youth groups about the joys of pure love, which includes personal dignity and reserving sexual activity for matrimony. By all accounts I’ve heard, his speeches are life-changing. Now you’re about to find out why

You teach pure love, which is chastity. What’s the difference between chastity and abstinence?

We have been made for love and that need in us is so deep that young people may be willing to take the risks of pregnancy or STDs because the world has told them that sex equals love. Then we see relationships where sex destroyed love and we wonder what went wrong.

The only solution capable of breaking through all this hurt and confusion is the virtue known as chastity.

So chastity is a big part of personal integrity?

Jason: That’s how the Catechism explains chastity. It’s an integration; there’s integrity not only between what you believe and how you live, but you’re integrating these sexual desires. You’re not repressing them or shoving them into the subconscious. Rather, you acknowledge them, you realize their goodness and you look to God for the strength to use that gift as you ought to.

Given that most kids are taught secular sex ed and sometimes Planned Parenthood even gets into Catholic schools pushing its promiscuity agenda, how do you deal with that? Do you bring up “unplanned pregnancy”?

Jason: That’s interesting. That’s how I got involved in the chastity ministry. I did about three years of sidewalk counseling in front of an abortion clinic not far from where I went to college. Doing three years of talking to these women every single week, you just get this nagging feeling—you feel kind of late. Why couldn’t I have met this girl last month? Why couldn’t I have met her when she was in seventh grade, so that she wouldn’t have chosen this lifestyle?

My love for the unborn babies and the whole pro-life movement is one of the greatest factors that motivated me to give chastity talks—to deal with it on the front end. That’s not to say that my message is any more important than those continuing to do the work on the front lines at the abortion clinics. But I think both outreaches have to work together in order for the pro-life message to succeed.

When it comes to addressing unplanned pregnancies and things like that, what’s so sad about a lot of the abstinence presentations is that they speak of unplanned pregnancies and sexually transmitted diseases in the same breath, as if children are a burden like Chlamydia. And I understand the sociological implications of having a baby out of wedlock, but if we can start to approach children as a gift to be received with love, then teens can start to understand that “Hey, by being abstinent until marriage, I’m loving my children by not having them right now.”

I saw one birth control ad that called pregnancy “the mother of all nightmares.” That whole mentality is pushing young people not simply toward the contraceptive lifestyle, but even toward a mentality prone to abortion: “Oh, heaven forbid that you should ever have life come forth from your love.” And what I try to do is wed life and love together and show how they’re really inseparable. I think teens get it—they get the message.

Talk about how you teach and how students respond to your presentations.

Jason: I do not come wagging a finger. I respect them. I love them and they know it. And I also try to throw in plenty of humor throughout the assembly because, as I see it, chastity is a delicate subject. It’s like doing surgery on them and you need your laughing gas or anesthesia before you can go in and make your cut. When I get them laughing and having fun, I can make some serious points and they’re less defensive because they’re having a good time overall.

Most of the presentations are at Catholic high school assemblies. I also give a bunch at public high schools, where we secularize the message and take out the religious content, but it’s mostly the same because the truth is the truth and there’s so much that you can tell them.

We’ll speak to the student body for about an hour and 15 minutes and then I’ll stay after the assembly with the teens and counsel them. I just say, “Hey, if any of you want to hang out and talk, I’ll be here.”

We did that in New York and the students formed a line that was seven hours long. And I just sit and work through what they’re going through, one on one. This is not only some of the most powerful ministry time for them; it’s also the greatest education for me because they teach me so much—why they do the things they do, what they’re going through.

One teen came up a couple of hours after the assembly and handed me a piece of paper and said, “This is for you. It’s a drawing I made of you.” It was like a strange looking icon of me where there were different symbols all over it… He said, “The fire coming out of your ears represents that you hear us.” That was the greatest compliment I’ve been paid in 10 years.

These days a lot of women, young and older, are drugged and raped. Do you teach prudence and warn of potential dangers?

Jason: One of the most common requests I get after the talk is for advice to rape victims. We get them at almost every single school. I remember one school—I think seven girls in a row came up that had been raped.

Teens don’t realize how much easier it becomes to maintain your purity when you surround yourself with people who have the same values as you do. While a woman shouldn’t be blamed for her own rape, she should be taught how to avoid situations where such tragedies occur.

One of the greatest joys of my ministry was when a girl came up and said, “You haven’t met me before, but I wanted to thank you.” She was raped by her boyfriend, but when she took him to court, he denied it and was found innocent. The pain of her rape was compounded by the fact that he got off free.

He then moved to a different state. A year or two passed by and she got a phone call—I think from his parents or attorney—because he wanted to go back to court and admit his guilt. When they were in court, he testified that the reason he wanted to render a guilty verdict on himself was because he saw a chastity video at school. He decided that, after he saw the video, he needed to make things right with her. She told me that in court he admitted he saw the Romance Without Regret video and then he turned himself in to the authorities.

That’s the Catholic Answers DVD by you and Crystalina. Did he go to jail or don’t you know?

Jason: I’m not sure what sentence he was given, but he was found guilty for the rape.

Jason: It’s tragically beautiful. And you know if that guy had just seen some video on safe sex, it wouldn’t have changed his heart. He needed to see a video about the virtues of love and purity and the value of human sexuality.