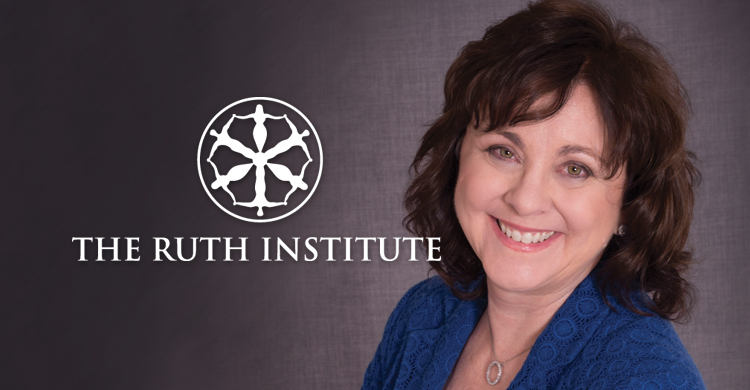 Jennifer Roback Morse, PhD, founder and president of the Ruth Institute, brings a unique voice to discussions of love, marriage, sexuality, and the family.

Tell us about the Ruth Institute. What led you to found it?

I had been a hard-charging career woman in my 20s and early 30s.My husband and I put off having children until my career was settled, largely at my insistence, but then we had difficulty conceiving. We adopted our son, and shortly after I became pregnant with our daughter. Within the space of six months, my world was completely turned upside down. My plans of never missing a day of work werescratched by having a toddler and a new baby at the same time. I realized that the “life-script” I had bought into was unrealistic.

So I founded the Ruth Institute with the intention to talk to young people about those kinds of issues. I wanted to help young people, especially women, dodge some of the bullets that had been so painful for me.

How has the vision of the Ruth Institute changed over time, particularly in recent years?

I founded the Ruth Institute in 2008 when California’s Proposition 8 campaign to amend the state constitution to define marriage as the union of one man and one woman was in full swing, and I became a campaign spokeswoman. By that time, I had written two books on the social significance of the family and was (and still am) convinced that redefining marriage would be harmful to society and to millions of people, including many gay people and the children they would obtain legal rights to.

Not long after that campaign, I was approached by Brian Brown and Maggie Gallagher of the National Organization for Marriage. They asked to bring the Ruth Institute under NOM’s umbrella. From 2010 through 2013, the Ruth Institute was part of NOM.

In June 2013, the U.S. Supreme Court decisions on the Defense of Marriage Act and the challenges to Prop 8 persuaded me that the proponents of genderless marriage held a commanding position in legal and political arenas.1 I became convinced that the Ruth Institute needed to change tactics.

How did you then change your strategy?

We put a lot of thought into our next moves. I had always considered myself more an academic and educator than a political person. At the same time, I have also thought of myself as a public policy commentator and analyst. I decided to think this strategy problem through without regard for my personal skill set or comfort zone.

I asked myself: What could we do that would be constructive yet completely separate from the legal, political, and public policy terrain where our movement was taking such a beating? We concluded that we had to make our approach more personal, because we were losing by making abstract logical arguments that ordinary people couldn’t relate to.

We simplified our approach to focus on answering a few simple questions: Who is getting hurt by redefining marriage? Who has suffered from the decline and deconstruction of marriage? Can we draw analogies between past “alternative family forms” and the current drive to remove the gender requirement from marriage?

From that, we came up with a twofold approach: First, we needed to start talking about the whole sexual revolution, not just the current crisis. Second, we needed to talk about the people who have been harmed in the most personal and specific ways possible. From that came the idea to focus our attention on “healing the family.”

What is the Ruth Institute currently doing to help heal the family?

Everything we do is focused on the following three-part structure:

We have redesigned our website with this structure in mind to appeal to and support the victims and survivors of the sexual revolution.

Who are some of the victims of the sexual revolution?

The most obvious victims are the children of divorce and the reluctantly-divorced, who would have liked to stay married but were divorced against their will. I also talk about the heartbroken career woman, who has a career and education but who is unintentionally unmarried, childless, or both. We developed a brochure called “Are you a Survivor of the Sexual Revolution?.” It lists 12 different
categories of survivors. Whenever I share that with a group, everyone recognizes themselves or someone they know in pretty much every category.

In your opinion, has the sexual revolution resulted in increased loneliness?

No question about it. The sexual revolution provided more easy options for exiting first from the family, and ultimately from family relationships.

Just look at the widespread use of third-party reproduction: People want to have babies without even attempting a relationship with their child’s other parent. Anonymous gamete donation is a complete retreat from human relationships.

How is contraception connected to the sexual revolution?

A key idea of the sexual revolution is that a good society should separate sex from babies, and both fromarriage. This superficially seductive but ultimately flawed idea has been permeating society since 1965.
The widespread promotion of contraception and the contraceptive ideology allows many other features of the sexual revolution to appear plausible, such as the “hook-up” culture and cohabitation.

Comment on Blessed Pope Paul VI’s courage in promulgating Humanae Vitae, despite the wide array of opposing opinions, including some within the Catholic Church.

Blessed Pope Paul VI was a prophet;that is certain. Many people expected him to overturn the doctrine. I wonder if people have similar hopes that Pope Francis will overturn the doctrine on divorce and same-sex unions. Ultimately, the Holy Spirit miraculously protects the Church from error, followed by the wailing and gnashing of teeth by those who think the Church will finally “get with the times.”

“Finally, careful considerationshould be given to the danger of this power passing into the hands of those public authorities who care littlefor the precepts of the moral law. Who will blame a government which in its attempt to resolve the problems affecting an entire country resorts to the same measuresas are regarded as lawful by married people in the solution of a particular family difficulty? Who will prevent public authorities from favoring those contraceptive methods which they consider more effective? Should they regard this as necessary, they may even impose their use on everyone.2”

We can see this prediction evident in China’s one-child mandate on families, a practice both counterto moral law and repressive of the inherent human right to have children.3 In any case, the Catholic Church has been the most consistent opponent—and in some cases, the only opponent—of governmental population control.

In your work, do you find that Humanae Vitae is more accepted today than in previous decades?

When I talk with conservative evangelical audiences, I find them open to learning more about the Catholic approach to contraception. That is very encouraging to me. And, of course, a generation of young Catholics has been influenced by Pope Saint John Paul II and his theology of the body. These Humanae Vitae-following Catholics are embracing the traditional teaching with joy and having large families.

What can we do to reverse the contraceptive mentality and heal the culture?

I think the most significant step we can take is to provide opportunities for the victims to speak out and tell the truth about what happened to them. Our culture systematically suppresses victims’ stories, as the pro-life community knows very well.

For example, we know that abortion hurts women. In today’s culture, it takes genuine courage for a woman to raise her hand and say,“Look here: Abortion hurt me. It didn’t solve the problems it promised to solve. Listen to me.” Yet the Silent No More Awareness Campaign (SilentNoMoreAwareness.org) has been hugely successful in touching people’s hearts first, and then their minds.

I think we need to do something similar for every other victim group:victims of divorce, heartbroken career women, refugees from the gay lifestyle, cohabiters with regrets, and others. If you stop to think about it, you will see that each of these victim groups is socially invisible. They are not permitted to tell their stories, sometimes not even within their own families.

Children of divorce are not generally allowed to say something like this: “No, Mom, I really wasn’t happy for you on your wedding day, when you married a new man who wasn’t my father. That was the day I knew that you and Dad were never going to get back together.” The legal parents of donor-conceived persons don’t typically enjoy hearing their children say, “Yes, I’m glad I’m alive. But I want to know the other half of my heritage and my identity.”

At the Ruth Institute, we aim to create safe, supportive spaces for people to tell those kinds of stories.

The Ruth Institute offers assistance to those hurt by the Sexual Revolution who are ignored in today’s culture, giving voice to all those impacted and providing a path to a
different public narrative that reflects the values of moral law. More information about their programs and contact information can be found at RuthInstitute.org.

Before founding the Ruth Institute in 2008, Dr. Morse’s academic career included teaching posts at Yale University and George Mason University and research stints at the University of Chicago, Cornell Law School, and Stanford University’s Hoover Institution. Following an infertility crisis, and after adopting one child and giving birth to
another within six months, Dr. Morse left her academic career for full-time motherhood. This experience convinced her that children need relationships with their mothers and fathers and that marriage provides the most reliable way of assuring that
children receive this. Dr. Morse came to believe that our toxic sexual culture lies at the
root of our crumbling marriage culture. She is passionately dedicated to inspiring the
victims of the sexual revolution to become survivors and ultimately advocates for
positive change.

Allyson Smith is a technical communications professional who has been involved in Catholic and pro-family activism for a number of years. Allyson previously worked as a freelance journalist for Catholic newspapers.