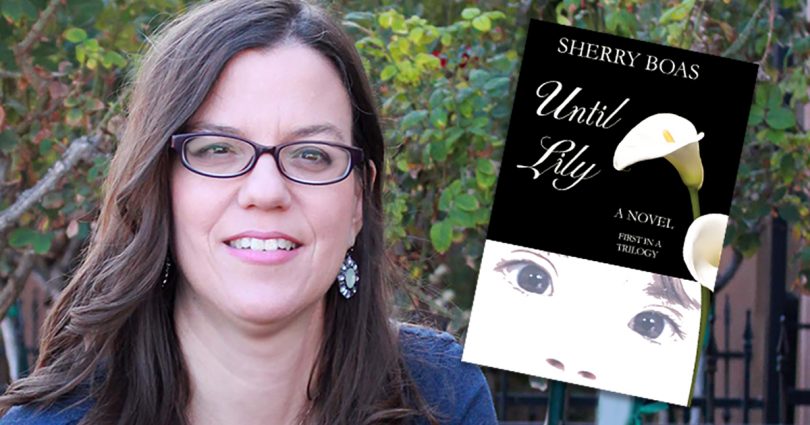 Sherry Boas is the author of the highly acclaimed Lily series, which began with Until Lily and has developed into an expanding collection of novels whose characters’ lives are unpredictably transformed by a woman named Lily, who has Down syndrome. Sherry’s latest release, The Things Lily Knew, is the fourth in the series. She has also written A Mother’s Bouquet: Rosary Meditations for Moms and the novel Wing Tip, a unique tale of relentless love that celebrates the unfathomable mercy of God. At the time of her interview with Celebrate Life Magazine, her first children’s book, Little Maximus Myers (Tau Publishing), the story of an altar boy too small to carry the cross, was expected to be released in late 2013. Sherry and her husband, Phil, live in Arizona.

Tell us about your career in journalism prior to becoming a stay-at-home mom.

In the 10 years I spent at a daily suburban newspaper, I had a variety of beats as a news reporter. I covered everything from cops to schools, city government, religion, and human-interest stories. I ended my newspaper career as a feature writer and columnist in 1998, when we adopted our first baby.

Tell us about your children.

All of our four children are adopted. Our oldest, Maria, now 15, was exposed to crack [cocaine], alcohol, and cigarettes in utero and is a phenomenal young woman. She loves life and all things Catholic, and inspires me every day to live out my faith more fully. She is creative and artistic, with a passion for video production and editing, and drawing.

Our second is Michael, 13, a caring and gentle soul who has made it his role to care for his younger sister, Teresa. . . . The two of them have a very special bond. He is on her side in all things, and she knows it. He serves her, she relies on him, and they relate to each other in a way that is unique to just the two of them. He loves building things, fixing stuff, and playing sports.

Our third is Teresa, 11, who has Down syndrome. She was conceived in rape and was the ninth child of her birth mother, who raised all of her other children, now grown. Teresa loves to draw and play creative games with her younger brother, setting up elaborate scenarios with her dolls and his toy soldiers. She is outgoing, friendly, and loves babies and toddlers. She is the inspiration for Lily.

Our fourth child is John, 8, who was born at 25 weeks of gestation. He was a pound and a half, 12 inches long. His birth mother asked for an abortion when she learned, at the emergency room, that she was 24 weeks pregnant. The ER doctor told her she was too far along to terminate and that she must stay in the hospital, or she and her baby would die. She left the ER and returned a week later, hemorrhaging. They performed an emergency Caesarean section, she signed adoption papers, and Catholic Charities called us.

We were told he would have a 70-percent chance of cerebral palsy, based on his brain scans. He also had a host of other health problems, including a resectioned intestine [requiring the use of an ostomy bag] and liver failure, requiring a medical miracle, which we received through the intercession of Blessed Mother Teresa. John is thriving today and has no noticeable disabilities, other than a bit too much energy and an overactive imagination, which keeps life from getting boring!

Why did you and your husband adopt children with special needs?

We were not specifically looking to adopt kids with special needs. I would not have considered myself special enough to have all the gifts necessary for such a calling. But God takes our small bit of generosity and responds with a large helping of generosity that can never be matched. We were open to whatever plan God had for our family, so He rewarded us with these amazingly awesome children and gives us the grace every day to live out the beautiful life He has built for us.

What inspired you to become a novelist while managing a houseful of homeschooled children?

A good story flew into my head and I had to write it. This is how I describe it on my website:

One night, when I was tucking in my daughter who has Down syndrome, I had a flash forward. I saw my Teresa, all grown up, tucking in an elderly woman, whose loneliness was dispelled by the sweetness of Teresa’s exuberant kiss on the cheek and her meticulous placement of covers around a set of frail, aching shoulders in a careful effort to fend off the chill.

I felt a great joy as I realized that the old woman is the future me. I began to contemplate what might have been if my husband and I had come up with a different answer the day our adoption counselor called and asked if we would consider adopting a newborn baby girl with Down syndrome. I imagined an alternate universe in which there lives a woman who said no and remains unaware of what she missed.

And in still another alternate existence of my imagining, there is a woman who said no, but was overruled. This woman grudgingly accepted and endured, and in the end, understands the magnitude of the gift that has been forced upon her. That third universe is the one where Lily lives, carrying out her life in illuminating moments that testify to the inherent, limitless, and unmatched value of every human soul.

What are the unique gifts that people with Down syndrome give to society?

People with Down syndrome give what we are all called to give: love—the kind of love that doesn’t count the cost, doesn’t hold back, doesn’t know the meaning of giving itself sparingly, is eager to forgive, and is not hard on itself or others.

If someone has no personal involvement with Down syndrome, why should he or she read any of the Lily books?

Not everyone is going to be interested in Down syndrome. Chances are, if you don’t know someone personally who has Down syndrome, you are not going to have a great deal of interest in it. But you don’t have to have interest in Down syndrome to enjoy and be moved by the Lily series. It’s a series about life. I dare say everyone will be able to relate. Lily, the character with Down syndrome, is the catalyst for change. These books are more about the people in Lily’s life than they are about Lily. They are more about us than they are about her. Ultimately, the fundamental, underlying issues speak to every one of us.

What message do you want readers to take away from the Lily series?

Life in this fallen world is tough, but it’s worth the struggle. All life is a gift. Sacrifice is beautiful because it is a reflection of beauty itself —divine love. Sacrifice is the only thing that can prove love.

What has been the impact of a fiction series whose central character has Down syndrome?

Readers have told me they have cried over things long past in their lives, things they haven’t faced head-on before or at least not in the particular way that the Lily books present them. I have heard people say the books should be recommended reading for all parents, because of the universal struggles all parents face and the lessons Lily has to teach. I am happy to say Lily has also made people laugh, and for this, I am grateful, since laughter is such a gift.

What writing projects are you working on currently?

Things Unknown to Lily is the fifth in the Lily series, and it deals with depression. I am hoping to release that one in the middle of next year.

The other book is . . . for young readers (and old readers who happen to like squirrels). Billowtail is about a band of squirrels that set out in search of a baby squirrel that fell from his nest and is in the possession of a young pilgrim on the Way of Saint James in Spain. The book takes place in 1214 and commemorates the 800-year anniversary of Saint Francis’ pilgrimage on the Way of Saint James. So, you might be able to guess who shows up every now and then to lend aid to the squirrels! The difficult thing about tree squirrels is they are loners. They do not live in groups, and they know nothing about teamwork. So, they are going to have to come to understand the dangers of self-absorption, and the value of community and self-sacrifice along the way. I hope to release Billowtail in the spring of 2014.

What has been your most popular book? Why?

Fiction: Until Lily. It strikes a chord and hits on a lot of universal themes about the difficulties life hands us, the way in which we choose to respond, the regrets we face, the healing offered to us, and the joy we discover when we give ourselves completely over to love.

Nonfiction: A Mother’s Bouquet: Rosary Meditations for Moms. This book has helped women understand the great gift they have been given in their holy vocation of motherhood.

Why is motherhood a sublime calling for you?

For children and for all of us, really, holy equals happy. Children are born with a love and yearning for God. That’s how God makes human souls. Let them have God and they will be happy. Raise them on the truth and beauty of God, and they will have joy. Let the Disney Channel raise them and you will get something entirely different.

Based on your own journey as a mother, what advice would you give to parents?

You know, so often, as parents, we wish our children came with an instruction manual. But we know what it would say:

There are many things the world tells us about motherhood: It’s a burden. It’s drudgery. It’s unremarkable. It’s a right every woman possesses and every woman is entitled to, if she deems it necessary to bring her fulfillment. It’s the remedy for an aching emptiness. It’s sheer and utter bliss.

Actually, it’s none of the above. It is simply this: a great gift. We need to look at the children entrusted to us and say with Mary, “The Lord has done great things for me” [Saint Luke 1:49].

I have to confess I have not been given the children of my dreams. The truth is, I could not have dreamed up such wonderful children. God’s plans are so much better than ours! Proof yet again that we find true happiness when we surrender to the will of God.

Leticia Velasquez is a wife and mother, an award-winning pro-life speaker and writer, cofounder of Keep Infants with Down Syndrome (KIDS), and author of A Special Mother Is Born (a collection of 34 stories from Catholic parents of special-needs children).