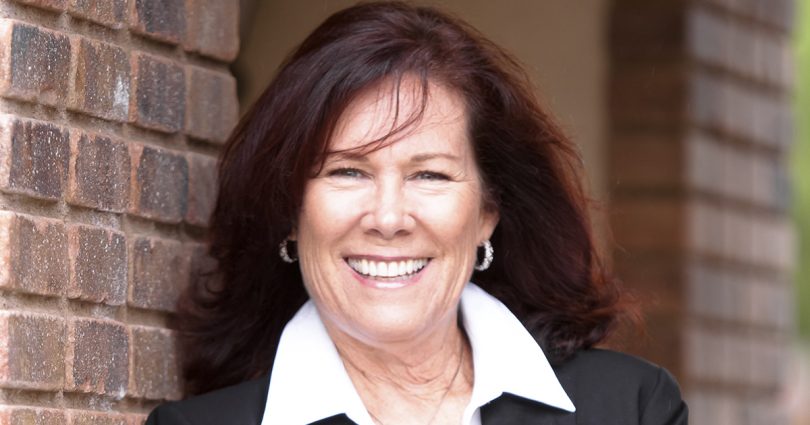 “I was honored to receive it,” remarked Kathleen, a member of Legatus since 2007. “I also had the opportunity to tell President Bush how funding we received through his faith-based initiatives helped our clinics.” Birth Choice is a faith-based pro-life organization that provides free medical services, education, and other support for pregnant women and their families.

Kathleen knows firsthand the tragic consequences abortion can have on women’s lives, as she herself had one in 1980—a decision she deeply regrets. “I was told it was a blob of tissue and believed that once I had the abortion, life would go back to normal,” she recalled. Now her mission in life, she explained, is “to compete for the lives of women and their children—both born and preborn.”

Gaining the world and losing her soul

Kathleen was raised in a large, devout Irish Catholic family and attended Catholic schools. She went to work for AT&T, married at age 19, gave birth to a son, and soon was enjoying financial success. But her Catholic faith wasn’t important to her. She remembered, “I was wrapped up in my job and making money.”

Her marriage was troubled, she separated from her husband, and became pregnant. She considered abortion her only choice: “I couldn’t bear the thought of telling my parents I was pregnant by another man.”

Kathleen sought help from two organizations her Birth Choice Health Clinics now compete with: Planned Parenthood and Family Planning Associates. She took her pregnancy test at PP and had her abortion at FPA. Her only education was a quick presentation on what the abortion entailed, with no counseling about the option of keeping her child.

The baby’s father drove Kathleen to the abortion mill, and that was the last time she saw him. Though the abortion occurred over 30 years ago, she still vividly remembers a big room with dirty mattresses where women were taken to recover. Many were crying. Afterward, she sat in the parking lot and cried herself.

Later, Kathleen quit her job, got her marriage annulled, and moved to Oklahoma, where she got involved in the pro-life movement—hoping to spare other women and babies the trauma of abortion. She volunteered at an Oklahoma City pregnancy resource center and even drove to Kansas to pray in front of late-term abortionist George Tiller’s infamous mill in Wichita.

Kathleen’s post-abortion recovery included returning to the Church, receiving the sacrament of reconciliation, and taking part in a naming ceremony for her aborted baby, whom she believes was a boy. She named him Tobias, and years later, when she founded her maternity shelter program, she named it in his honor. Toby’s House, located in Orange County, California, provides temporary housing and other support for up to two years, for women in crisis pregnancy situations.

Kathleen eventually remarried, gave birth to other children, and returned to Southern California. All the while, her dedication to the pro-life cause was steadily increasing. When her children were older, she told them about her abortion and they gave her permission to reveal her story in public. Her pro-life mission began with a desire “to uncover the darkness of the abortion industry.” In 1981, she took over the direction of a pregnancy resource center in Mission Viejo, California, and renamed it Birth Choice, in honor of the pregnancy center where she had previously volunteered.

Today, Birth Choice operates six stationary clinics and one mobile clinic, and relies on 30 paid staff members and over 200 volunteers. In 2011, Birth Choice Health Clinics received over 12,000 patient visits, including many from abortion-minded women. In its 30 years of existence, Birth Choice has served over 50,000 people.

Birth Choice Health Clinics are fully licensed and currently located in California’s Orange, Los Angeles, and Napa Counties. They offer free services that include pregnancy testing, ultrasounds, testing and treatment for sexually transmitted diseases, well-woman care, prenatal care, education, counseling, referrals, resource assistance, and parenting classes. Each is strategically located near an abortion facility. The clinics are designed to be inviting and pleasant. They’re clean and tastefully decorated, with pleasant music playing and informative literature readily available. Jennifer Wallace, Birth Choice’s director of program services, explained, “Our goal is to offer women a safe, loving environment and let them know they have options other than abortion.”

Crucial to Birth Choice’s success has been the addition of ultrasound technology, which allows expectant parents to see images of their preborn babies and watch them move. When the clinics were merely pregnancy resource centers and didn’t offer medical services, about 10 percent of their abortion-minded patients were persuaded to choose life. With the ultrasound equipment, that number has increased to 77 percent.

When the question of contraceptives arises, Birth Choice staff and volunteers provide a brochure explaining the risks and problems associated with various contraceptive methods. Birth Choice doesn’t promote their use. Kathleen stressed, “We’re an abstinence-only organization. It always works. And for those single women who have had sex before marriage, we encourage them to embrace a second virginity.”

Funding is always a challenge, particularly in the current economy. Birth Choice clinics are funded mostly by private donations and operate on a combined annual budget of $1.7 million. As with many nonprofits, donations have decreased significantly in the last few years. Kathleen must constantly fundraise, but she noted, “I believe in miracles. I manage to pay my bills every month.”

Now widowed and with four grown children, Kathleen devotes herself full-time to her apostolate, frequently speaking to churches and organizations about the work of Birth Choice Health Clinics. “It’s my job to go out and be a voice for the unborn,” she emphasized. “Before every time I speak, I say a simple prayer: ‘Thy loving will be done, Lord.’” Although Kathleen’s life hasn’t been easy, it’s been a good one. She concluded, “I love what I do.”