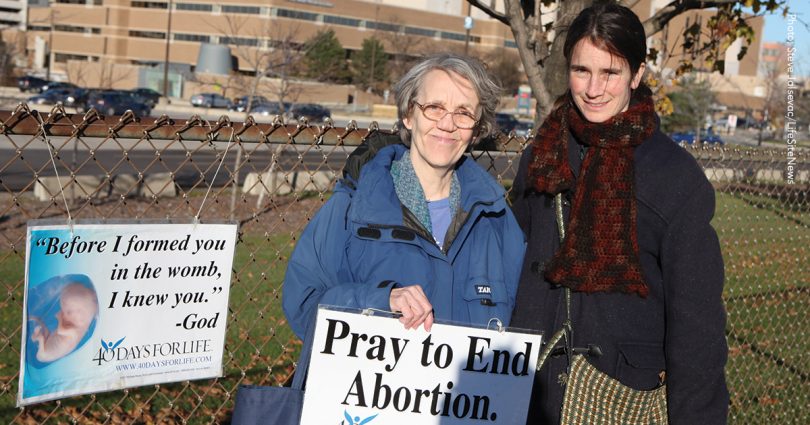 Two Canadian pro-life activists, one a frail 63-year-old great-grandmother and the other a lively, 38-year-old former postulant to a religious order, spent some time together in August 2011—in jail. Both were imprisoned in the Vanier Centre for Women in Milton, Ontario, for offering counsel to clients of Toronto abortion facilities. They were both in the prison’s maximum security wing for a month and a half.

For Linda Gibbons, mother of four (counting a baby she aborted before becoming a Christian), grandmother of five, and great-grandmother of two, it was familiar territory. She had already been behind bars for nine years for counseling near abortion facilities.

Previously, Mary Wagner spent four months in Vanier in 2010 before being acquitted of mischief. To be in the same prison population with Linda is “a joy,” Mary told Celebrate Life from Vanier. “She has become like a mom to many of the women.”

Similarly, when speaking to Celebrate Life from the same prison, Linda said of Mary, “She’s a diehard; she’s an evangelical Catholic, whereas I’m an evangelical Protestant. She’s like Mother Teresa, a little Mother Mary.” To have Mary with her is “a blessing, a mutual fellowship.”

In early November 2011, when both were free, Linda passed out literature and prayed outside while Mary entered an abortion facility and was re-arrested. Later that month, Linda watched Mary’s arraignment.

Both women have found the inmates at Vanier Centre to be far more open to their pro-life message than Canadian halls of justice, and have found plenty of opportunities in prison to counsel against abortion.

Mary admitted, “I’ve never been in a social setting where it’s easier to talk about abortion. The women all know that abortion is about killing babies. … I guess they haven’t been exposed to the language conditioning the rest of society has.” While in Vanier, Mary has attracted a handful of lapsed Catholic inmates who pray traditional devotions with her daily.

Linda adopts a more activist role than Mary, interceding with her much younger fellow inmates to prevent fights and reduce the sniping. “I think of them as my girls,” she explained. They respect her for her time served and because she herself had an abortion. “When you can tell them, ‘Been there, done that,’ they listen.

“I say, ‘You can tell God you’re sorry; you can tell God you love your baby and you miss your baby, and name your baby.’ Usually, then you see the tears flow; all of a sudden they get the idea that God isn’t holding this over my head … that sense of being able to grieve their child without feeling under the wrath of God.” She also observes her fellow inmates growing spiritually as she leads them through Bible studies.

The two women operate differently, though both simply want to counsel other women against abortion—rather than break the law.

Mary usually goes right inside the facilities’ waiting room, peacefully, to speak with clients. Even in the few minutes she has before the police arrive, she believes she’s won some victories. “One time,” she said, “a woman I had been talking to looked me right in the eye as though she saw the light. She … walked out of there.”

When the police arrive, they remove her, often to a distant part of Toronto, and when she returns and re-enters, they arrest her. She’s usually charged with mischief, a catchall term from the Criminal Code of Canada.

Mary, who has been arrested several times over the past two years, represented herself in court until early 2012, and has used court appearances to eloquently explain her position and condemn the law.

Linda stands on the street outside and tries to talk with abortion-minded clients on their way to the facility. She’s charged with standing inside the “bubble zones” established by injunctions around some, but not all, Toronto abortion facilities.

Why not simply stay outside the zone? Linda says she needs to be close to actually provide spiritual or medical advice. One year, when she and several others were able to counsel close up, they persuaded five women who already had laminaria inserted (to prepare the cervix for an abortion) to have them removed—not the kind of thing that can be yelled out across a busy street. “These women have a constitutional right to receive counseling, and I have a right to give it,” she asserted.

Linda believes the bubble zones are illegal because they were established by a temporary injunction 23 years ago, and should have been replaced by a permanent injunction or abandoned long ago. Moreover, in December 2011, her attorney argued before the Supreme Court of Canadathat she shouldn’t be charged criminally for violating injunctions issued by civil courts. A ruling is expected this spring.
Alissa Golob, youth coordinator at Campaign Life Coalition’s headquarters in Toronto, said,

Mary is inspiring because she is young and so intellectual. She has a degree. She could be doing anything. So people think, “This must be something worth fighting for.” Linda is inspiring because of her bravery. Here she is, a grandmother. She’s so thin and she’s weakening. All she does is hold a sign outside an abortuary, but she knows she’s going to be arrested.

Linda had her abortion in 1970, shortly before becoming a Christian. A few years later, she was drawn to the pro-life movement. She was shocked into activism shortly after seeing Dr. Bernard Nathanson’s documentary The Silent Scream. In 1994, at her first pro-life protest, when the police asked her group to move away from the facility where they were blocking access, she refused. “I thought of Our Lord’s words, ‘Could you not stay and pray with Me an hour?’” She was arrested, knowing that she would lose her job at the Canadian military headquarters.

She has since been arrested 21 times and was last arrested in December 2011. She remains incarcerated in Vanier until her trial in April, because she refuses to accept bail conditions that require her to avoid abortion facilities.

Mary grew up in a large, happy, devout, pro-life Catholic family that took in foster children. She was, said her mother, Jane, “a little mother to the rest of them. She has always been about kids. She went to all the pro-life marches. She’s no fanatic, but she is morally serious.” Mary worked her way through university waitressing, until management refused to back her when she declined to serve alcohol to pregnant women.

After university, she spent six months in a British Columbia jail for witnessing at an abortion facility, and then three years with the Sisters of St. John in the U.S. and France, but discerned a prevailing call to minister to women with unwanted pregnancies.

During her August 2011 incarceration in Vanier, Mary stated she was where God wanted her to be, though “it’s not very easy.” However, she added, “It’s not a huge sacrifice, not compared to the people in Nazi Germany who paid with their lives for resisting.”

On March 21, when an Ontario provincial judge sentenced Mary to serve 92 days in jail for mischief, he fulminated, “You’re wrong and your God’s wrong. … You appear to be governed by a higher moral order than the laws of our country”  (LifeSiteNews.com). Reached through her lawyer after sentencing, Mary said she remained committed to counseling abortion-minded women. She told her mother, “I am at peace.”