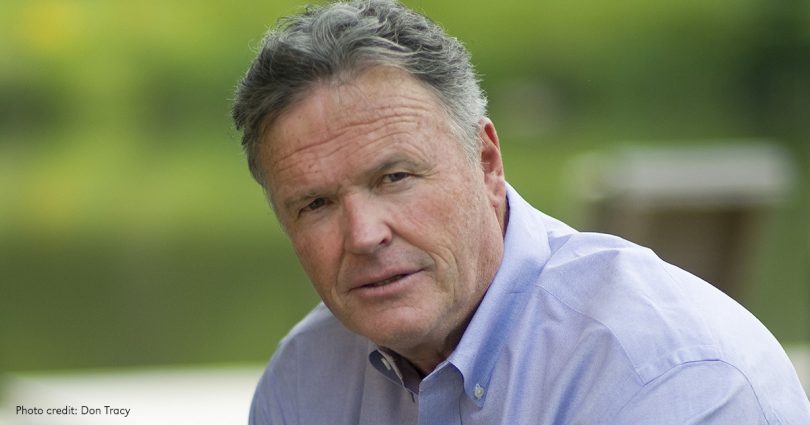 With the upcoming release of Childless, the third novel of his highly acclaimed series, Catholic author Brian J. Gail has now finished his chronicle of the American tragedy. His best-selling first novel, Fatherless (2009), has sold over 20,000 copies in some 20 different countries, and in its first two months, Motherless (2010) sold out its initial printing of 8,000 copies.

“Nobody wants to hear hard sayings if they’re put as a ‘no.’ John Paul II presented the theology of the body as a glorious yes,” he observed during his recent interview with Celebrate Life. Now Brian has presented that glorious “yes” to a new audience by writing a trilogy that is, at once, a sermon, a warning for our age and a realistic fiction thriller.

Brian didn’t set out to write a trilogy but to “reconcile the American dream and the Church’s universal call to holiness.” This father of seven children and former Madison Avenue advertising executive felt impelled to tell his children and the next generation the truth about God’s plan for life and love, and to show them the moral consequences of trading the divine plan for our own. “My generation [the baby boomers] pursued the American dream to the exclusion of the Church’s call to holiness,” he explained. “And in the process, we . . . handed our children stones instead of bread . . . . My generation has denied its children everything they need to survive, beginning and ending with truth.”

Those stones were the effects of the 1960s sexual revolution: widespread acceptance of the pill and other contraceptives, as well as the infiltration of violence, profanity and sex into American homes via cable television in the ‘70s and ‘80s. Broken families, moral decline and a burgeoning culture of death ensued, resulting in the collapse of American society in less than 30 years. Brian’s riveting novels suggest that the question isn’t what will fix America but Who can save souls, restore the family and create a culture of life. Only Christ can give us the bread we need.

Who is your intended audience?
BG: Our children, our priests, our seminarians and all others among the remnant—in that order.

Your characters’ conscience plays a big role in your novels. What’s the importance of forming a good conscience?
BG: In Deuteronomy [30: 19–20], Moses lifted up the Law in his hands and told our elder brothers in the faith that he was offering them a choice between life and death. I’d say the formation of a “right conscience” is about that important.

How far are we into the “Life Sciences Revolution”? What’s fact and what’s fiction?
BG: Time magazine recently published a cover story [Feb. 10, 2011] on this demonic end game. Its principal herald, [futurist] Ray Kurzweil, predicted … man wired to machine by neural implants, by 2045. … He’s the guy who predicted [in his 1990 book that a computer] would defeat the world’s reigning chess champion [which happened in 1997]. It’s being claimed that about two thirds of the … neural regions of the human brain have already been reverse-engineered [analyzed to understand their operation] and mapped.

Do you see people now beginning to grasp more clearly the connection between contraception and abortion, in vitro fertilization and other sins against life?
BG: I wish I could say yes. I can’t. One of America’s leading think tanks recently determined that history tells us empires collapse in stages. First, there is a cultural implosion. This is followed by an economic collapse. And finally, we have the complete disintegration of the political order. It is perhaps noteworthy that the cultural implosion itself has three stages. First, contraception becomes widespread. This leads to the widespread practice of abortion. This, in turn, leads to the widespread acceptance and practice of homosexuality.

There are lots of sermons in the first two books of your trilogy. What are you trying to say?
BG: The Gospel of life and love is the cornerstone of the new evangelization. Why? Because the gift to co-create life for all eternity is the primordial gift of gifts from a generous and trusting Creator. … But it’s a gift that carries with it an equally primordial accountability: the responsibility shared by the child’s parents to welcome and nurture and instruct this [child] in the mystery of the law of the gift [Pope John Paul II’s term for the biblical truth that self-fulfillment is only found in self-giving love and service to others], which is written into her own tiny heart.

Are you saying that clergy aren’t truly living out their spiritual fatherhood unless they also preach about life and love from the pulpit?
BG: Yes.

Are Fr. Sweeney’s [the main character in the trilogy] parishioners “getting it” or is the seed falling on rocky soil when he preaches?
BG: The cultivation of fertile soil for a productive spiritual life is first and foremost the responsibility of parents. It’s the clergy’s responsibility to add richness and depth in the faithful exercise of their divine mandate to “bind and loose”… and by facilitating the sacramental encounter wherein Christ reveals Himself to man and reveals man to himself.

In our time, man suffers from an epic and unprecedented identity crisis. He has lost touch with himself. Clearly, this suggests the unleavened people of God are entering into this great sacramental encounter [of the Eucharist] unworthily. Paul was fairly clear on this point. He said this was about the best way he knew to eat and drink condemnation upon ourselves [1 Cor. 11: 28–32, on the need to examine oneself before receiving the Eucharist].

Can you give us a hint of what Childless will be about? Is there hope in the end?
BG: The trilogy tracks 40 years in the life of a small mythical community… Fatherless is set in the 1980s. It’s morning in America. Man is handed a brilliant new apple with a two-headed worm [the pill and pornography] inside. Motherless is set in the first decade of the 21st century. It’s twilight in America. Man, effectively hollowed out, finds himself on the slippery slope born of his own technological genius. Childless is set in the 2020s and beyond. It’s midnight in America, the end of an age. But it’s also the dawn of a new age—an age a beloved former pope liked to refer to as … a new springtime of humanity.

Christina Novak is a freelance writer in Hartford, Wisconsin. She can be contacted at christina.novak09@gmail.com.