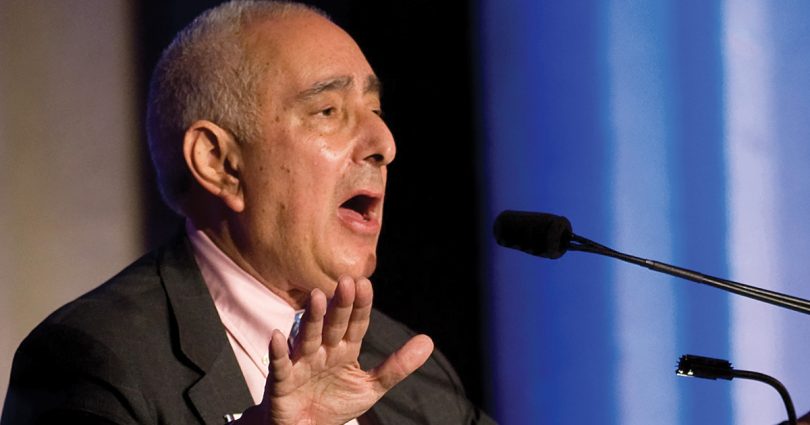 To be outspoken in defending life requires courage as well as common sense. Ben Stein not only has the courage to stand up against Hollywood, but the common sense to express in plain terms the values that are most fundamental to society. — Donald DeMarco

In addition to handing out Oscars for acting, Hollywood should also be handing out awards for not acting, that is, for having the courage in the real world (and not the reel world) to say what is right when society thinks it is wrong. . . . If it did, Ben Stein would certainly be a nominee for having the common sense to declare that “abortion is a violent killing of the most innocent of humans” (reprinted in The Human Life Review, Summer 1998, p. 98).

In a January 2017 interview with FOX anchor Neil Cavuto, Ben Stein cited the hypocrisy that is going on in Hollywood. . . . Although he did not indict all the citizens of “Tinsel Town,” he affirmed that many of its celebrities act as “a united blacklisting front who will go against anyone that they think is politically undesirable.” “To tell you the truth,” he said, “it hurt me a lot, when my career was at its peak, when I was for example pro-life, that word got around that I was pro-life, and it hurt me a lot.” . . .

Stein, fortunately, is honored outside of Hollywood. Bound4Life, a pro-life/pro-adoption organization dedicated to prayer, made Ben Stein its “Pro-Life Celebrity” for 2009. In making the award, it formally recognized that “Mr. Stein has been a clear and active voice in the pro-life cause. He has used his gifts and platform in acting, writing, and speaking to present the truth of human-hood without compromise.” The double meaning of the word “bound” is significant, referring to pro-lifers being journey-bound and yet bound and gagged by the pro-abortion establishment. In 2003, the National Right to Life Educational Trust Fund gave him its annual Pro-Life Award, which is probably dearer to his heart than the Emmy he won for his TV series Win Ben Stein’s Money.

The multi-talented Ben Stein is an author, commentator, lawyer, teacher, actor, voice actor, humorist, game show host, comedian, screenwriter, speechwriter, producer, consultant, and if that is not enough, a composer. . . .

Benjamin Jeremy Stein was born in Washington, DC, on November 25, 1944. He graduated from Columbia University with honors, majoring in economics, and graduated as valedictorian from Yale Law School in 1970. He was a poverty lawyer in New Haven, Connecticut, and then a trial lawyer for the Federal Trade Commission.

Despite his many triumphs, one success that stands out above all others is his fatherhood, which is the subject of his book Tommy and Me: The Making of a Dad. After trying to have their own children, Ben and his wife, Alexandra Denman, decided to adopt. Ben was slow at first both comprehending and enjoying his new role as a father. Things changed dramatically one night after he told his son a bedtime story. “Well, good night, Tommy,” he said to his son. And then his two-and-a-half-year-old son said, with perfect pitch and punctuation, “Good night, Daddy.” For poppa Stein, as he told CNN’s Bobbie Battista, “it was the sweetest voice I’ve ever heard. And I was simply putty in his hands from then on. There’s nothing that I would not have done for him, or wouldn’t do for him after that.” When people on business shows ask economist Ben Stein about a good investment, he always says: “The good investment is to go home from work early and spend the afternoon throwing a ball around with your son. That’s a really good investment. The returns on it are tax-free. There’s no possibility that you’ll lose on it. And your son will reap enormous benefits from it.”

One day, while Ben was cleaning out his son’s room, a chore not usually associated with a celebrity, he happened to catch a TV talk show in which people were gushing over the presumed fact that we are now living in a “Golden Age.” The S&P had tripled, and the S&P 500 had doubled over a relatively short period of time! More Americans are millionaires than ever before, etc. Stein was not enthralled. His thoughts turned to another set of numbers: “Last year, the Golden Age year of 1997, saw abortion ‘clinics’ and hospitals end the lives of about 1.4 million American babies” (“Ben Stein’s Diary,” American Spectator, May 1998). He thought of his son and how he “might have been sucked out and ground up in a ‘clinic’ or [a] ‘women’s health center’ (most absurd terms for killing rooms for little girls and boys), before we learned what everybody now knows about just how alive a baby in the womb is.” No matter how healthy the market is, it does not produce a Golden Age when so many innocent, human lives are prematurely extinguished by abortion.

For Ben Stein, being pro-life is hardly limiting oneself to a “single issue.” “I would not be on any other side,” he states, “than the side I’m on.” . . .

Life is broad and all-encompassing. . . . Being pro-life is the thread that holds together the tapestry of all human life. We can thank Ben Stein for his courage and his common sense.

The preceding text is an excerpt from Donald DeMarco’s book Apostles of the Culture of Life, which is reviewed in this issue of CLM.