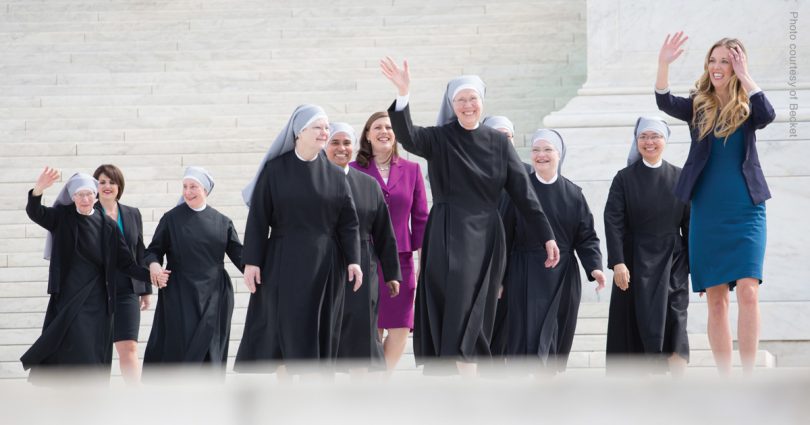 As the country finds itself immersed in the aftermath of a global pandemic and reeling from race riots and looting in several cities, we happily share some good news.

After several years of litigation over Obama’s 2010 Affordable Care Act’s “contraception mandate”—which forced employers to provide their employees with contraceptive coverage through their healthcare plans or face fines—the Little Sisters of the Poor were triumphant.

In a 7–2 vote, the United States Supreme Court ruled on July 8, 2020, to uphold religious exemptions enacted by the Trump administration. These exemptions allow employers to refuse to pay for abortifacient and contraceptive drugs within their company healthcare plans. The suit—brought on by the states of Pennsylvania and California—claimed that the exemption created by the Trump administration shifted the cost of providing contraceptive coverage to the states and was procedurally flawed.

Who are the Little Sisters of the Poor?

Started by Jeanne Jugan, the Little Sisters of the Poor is a congregation of religious women whose mission is to care for the elderly who have no one to care for them.

Jeanne Jugan was born in France in 1792. From a young age, she felt called to serve Christ, so at the age of 25 she joined the Third Order of St. John Eudes and began working with the poor. One frigid winter evening in 1839 she came upon a destitute and blind old woman abandoned and freezing. Sr. Jeanne carried the woman home, put her in her own bed, and cared for her. After that experience, Jeanne realized God was calling her to care for the poor and neglected elderly.

As Jeanne began to help more and more elderly people, word of her work quickly spread across France and beyond, and soon the Little Sisters was established. Young women of faith began offering their assistance, and within a few years, these caregivers grew into a flourishing religious community dedicated to serving the elderly poor. Today, the sisters provide care to more than 13,000 elderly in 31 countries.

In 1868, the first Little Sisters of the Poor arrived in the United States. Continuing the work of St. Jeanne, they offer the neediest elderly—of all races and religions—a home where they will be cared for with dignity and love.

The work the sisters have done with the elderly has been an immense blessing to people who have no one to take care of them. And this group of Catholic nuns, who uphold the sanctity and dignity of every human being, has fought tirelessly against the Obamacare mandate. 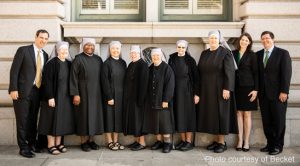 The lengthy battle began in 2011 in response to the Obama administration’s mandate that employers subsidize the provision of contraceptives for their employees. The Little Sisters refused to comply, spurring years of litigation.

Why the refusal? Contraception can serve as an abortifacient, initiating early chemical abortions by hindering the implantation of the newly formed human embryo. Additionally, contraception encourages the contraceptive mentality which views pregnancy as an “illness.” Abortion, then, becomes fallback contraception. The sisters could not, in good conscience, comply with the mandate.

According to Sr. Constance Veit, one of the Little Sisters, this was their third victory at the Supreme Court level, and it evoked a “mix of emotions,” especially in light of the coronavirus pandemic.

Sr. Constance told Celebrate Life Magazine: “We were very grateful that the Supreme Court recognized our right to continue to serve the elderly poor in accordance with our Catholic faith, and we were relieved to know that we can focus solely on our mission, especially during a pandemic that has taken a toll on our residents and sisters across the country. I was very relieved that our trip to the Supreme Court was over, grateful for our legal team at Becket and our supporters, and happy we could go back to caring for the elderly without the anxiety of our case hanging over us.”

Writing for the majority opinion, Justice Clarence Thomas stated: “For over 150 years, the Little Sisters have engaged in faithful service and sacrifice, motivated by a religious calling to surrender all for the sake of their brother. . . . But for the past seven years, they . . . have had to fight for the ability to continue in their noble work without violating their sincerely held religious beliefs.”1

Justices Samuel Alito, Neil Gorsuch, Brett Kavanaugh, and John Roberts joined Justice Clarence Thomas in the majority opinion. A concurring opinion by Justices Samuel Alito and Neil Gorsuch further explained that the federal Religious Freedom Restoration Act essentially necessitated the exemption. Justice Elena Kagan added that while the majority opinion was technically correct, she believed supporters of the amendment could still sue to get it reimposed on other grounds. Stephen Breyer joined the majority, while Justices Ruth Bader Ginsburg and Sonia Sotomayor dissented.

Sr. Constance is grateful to the Washington, DC-based nonprofit Becket law firm—whose mission is to protect the free expression of all faiths—for defending them. She is confident that they will successfully defend the Little Sisters as they look for a final resolution in the lower courts.

She told CLM: “I am confident the lower courts will . . . put a stop to this lawsuit once and for all. Above all, I am leaving everything in God’s hands. We know He won’t let us down.”

While Sr. Constance explained that she doesn’t believe the Little Sisters were specifically targeted, she does believe there is a concerted effort to push those of faith aside and limit the free exercise of religion to worship rather than accept that faith does have a rightful place in the public square.

“Through the people we have encountered over the course of the last few years . . . our eyes have been opened to the varied ways that religious liberty is under threat both in our country and around the world,” she said. “We have found great moral and spiritual support from many Catholics, as well as persons and organizations of other faiths.”

In representing the sisters, Ryan Colby, associate communications director for Becket, told CLM he was fairly confident in the outcome for the sisters.

“You can never predict with 100 percent accuracy how the Court will decide a case, but I was confident that the Little Sisters of the Poor would get the protection they were owed,” he said. “At Becket, we like to call ourselves happy warriors. That means we fight for religious freedom in both the court of law and public opinion with confidence in our arguments and a measured optimism in victory for the people we defend.”

Throughout the long court battle, the Little Sisters were confident that God would protect them. Sr. Constance stated: “Deep down, we believe that as long as we remain faithful to our vocation, God will protect us and bless us.”

While the victory was welcomed and is good news, the reality is that the legal battles of the Little Sisters of the Poor will likely continue. Justice Samuel Alito noted in his concurring opinion that Pennsylvania and New Jersey will likely pursue the arguments the Court declined to decide in this case, namely, whether the new rule is “arbitrary and capricious.”

If Alito had decided the new rule was compelled by the Religious Freedom Restoration Act, therefore not being arbitrary or capricious, it may have spared the sisters more legal wrangling. As it stands currently, the majority didn’t rule on that issue; it will now be litigated in the lower courts.

This question could cause future division among the justices and even worse if a different administration comes to Washington, DC, after the November election. Joe Biden, Democratic nominee for president, pledged to reinstate Obama-era policies that would force the Little Sisters of the Poor to provide access to birth control and abortifacients for employees.

Biden boasted: “If I am elected I will restore the Obama-Biden policy that existed before the [Supreme Court’s 2014] Hobby Lobby ruling: providing an exemption for houses of worship and an accommodation for nonprofit organizations with religious missions. . . . This accommodation will allow women at these organizations to access contraceptive coverage, not through their employer-provided plan, but instead through their insurance company or a third-party administrator.”2

The Little Sisters of the Poor would not qualify for the exemption because they employ and serve people other than Catholics.

Nevertheless, the Court’s ruling is undoubtedly welcome news for the Little Sisters and others who have fought so long and hard to ensure that their religious liberty rights are protected.

“The population of seniors is rapidly growing in every country, including the United States, and they will need care in the coming years,” said Sr. Constance. “We know God has a plan for us, but we could serve more needy older persons if we had more Little Sisters in our ranks. Please join us in praying for vocations to our community.”