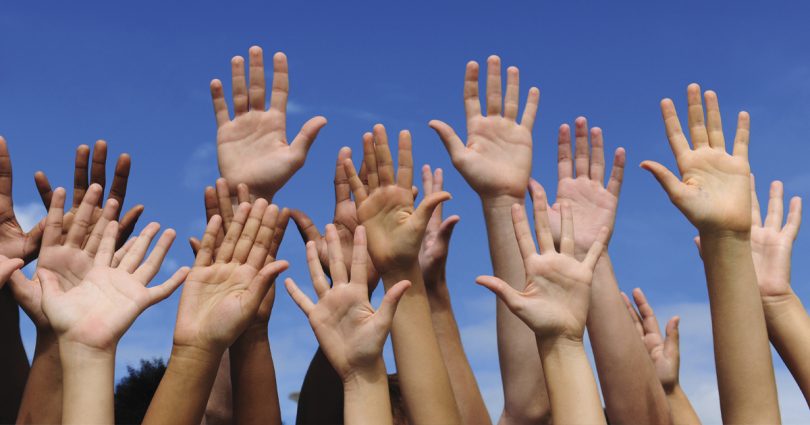 The Lord said, “Daily, the blood of thousands of aborted American babies1 cries out to me. I need more warriors to fight for My precious preborn. Whom can I send?” “Here we are, Lord,” multitudes of youth responded, with a thunderous cry. “Send us.” And they were sent out: in new pro-life youth groups, in YouTube videos, in flash mobs (see sidebar), in word and in deed. Their courage is saving babies here—and around the world.

When slavery was permitted in the U.S., slaves “had no rights and were just a piece of property,” declared Rachel del Guidice, president of the National Pro Life Youth Congress (PLYC), which educates, advocates, motivates, and equips teens to build a culture of life. “Today, people say the unborn is not a person. The abolitionists were a voice for the voiceless, the slaves. We are the voice for today’s voiceless, the unborn.”

The PLYC began in Akron, Ohio, in 2004, with two teenage girls serving as summer interns with what is now Right to Life of Northeast Ohio (RTLNO). They launched the precursor of the PLYC’s Excellent Citizenship and Virtuous Leadership initiatives. Today, the PLYC is sponsored by RTLNO affiliate Life Education Fund, which also sponsors Students for Life, a college group.

Excellent Citizenship exhorts teens to protect all human beings, from their biological beginning to death. Members can run for office in the PLYC, which functions as a “mini-Congress” that has national, state, regional, and local officers. Four “congressional sessions” train students in the four cardinal virtues (justice, temperance, fortitude, and prudence) as they apply to leadership.

“Prudence is not merely knowing the good, but doing the good,” emphasized Rachel, a homeschooled senior who lives in rural Shreve, Ohio, adding that the PLYC is nondenominational but has a heavy Catholic presence. “If every person in the Church did something—pray, fast, or advocate—we wouldn’t be where we are today.”

The PLYC boasts more than 50 chapters, with over 1,000 members in 10 states and Canada. Any school, church, youth group, or organization can join the PLYC as a chapter, explained Gregory D. Frank, the PLYC’s executive director and cofounder, and RTLNO’s network director. Many PLYC graduates are now serving as Students for Life officers on university campuses.

Beginning a PLYC chapter isn’t for the spiritually timid. When Leah McKee began Titans for Life at Triway High School at Wooster, Ohio, she endured nasty comments and saw pro-life posters ripped off of lockers. The Titans for Life witnessed to peers by participating in American Life League’s National Pro-Life T-Shirt Week and wearing Precious Feet pins, among other forms of activism. “It’s a great starter for pro-life conversations,” Leah said enthusiastically, about Titans for Life.

Before high school senior Justin Cicchella could begin the Geauga Catholic Teens for Life at Newbury Junior-Senior High School in Newbury, Ohio, his mother miscarried at 12–14 weeks. While the family gathered around the tiny casket and cried “over my lost brother, there were people killing babies as old as my brother every day—and it was legal!” lamented Justin, captain of his football team and role model for “other teenage boys who might not think you can be cool and pro-life.”

The PLYC’s motto is Jeremiah 1:7-8: “The Lord answered me, ‘Say not, I am too young.’ To whomever I send you, you shall go; whatever I command you, you shall speak. Have no fear before them, because I am with you.” Its members take it to heart. In 2007, when an abortion mill opened in Green, Ohio, PLYC prayer warriors began lobbying for life and praying the Rosary outside the mill. On the 21st day after the mill opened, it shut down permanently!

“We are the voice for the voiceless,” Rachel reiterated. “We are the abolitionists of today!”

“The youth are not the future. We are here—and now!” declared Jake Dagel, 19, founder and executive director of Teen Defenders, an international pro-life networking group dedicated to educating and empowering teens to take their battle positions in the war against the culture of death. “The youth will end abortion!”

If that sounds like a brash statement, so was Jake’s awakening in 2007 to the slaughter of the preborn. During his freshman year at Spalding Catholic High School in Granville, Iowa, he watched, as part of a pro-life presentation at his school, the Center for Bioethical Reform’s video on partial-birth abortion.

“By networking with teenagers, ages 13–19, and molding them into pro-life warriors,” said Jake, “we’ll start a shock wave in the United States. When we do that, we can change the culture!” And then change the world. “Teen Defenders will take part in various campaigns, such as door knocking, praying at the abortion clinics, 40 Days for Life, Silent Day of Pro-Life Solidarity, and many more,” its website explains. Teen Defenders already has 60,000-plus teens worldwide following its activities through YouTube, Facebook, and its website.

Jake travels the country exhorting teens to slough off apathy and be radical for life, and helps cosponsor pro-life events, such as American Life League’s “Protest the Pill Day” last June (see Celebrate Life and www.ThePillKills.com). For the past two summers, he has joined Baltimore-based Defend Life’s Face the Truth Tour, holding up graphic signs showing aborted babies at various East Coast locations.

Jake, now a college freshman who aspires to serve in Congress, strongly supports the human personhood movement, which works to achieve the legal recognition of every human being, born and preborn, as a human person. “To deny personhood is to deny the fundamental right of every human being: life,” declared Jake. “Until this nation rises up and stops compromising, abortion will not end. We must stop passing incremental bills that do nothing for the cause of life, but instead dehumanize the child and strip the sense of emergency from the demonic act of child slaughter.”

Say yes to God and life and anything can happen, testified Lia Mills, who was 12 years old when she entered the pro-life arena after seeing a video on abortion.

Several months later, in February 2009, as an assignment for her public-school seventh-grade class, Lia wrote a speech for a school speech contest. She felt God’s prompting to write on abortion. Despite opposition from her pro-abortion teacher and a judge who refused to listen to her speech, this powerful young orator won the contest. Later that year, Lia became Teen Defenders’ spokesperson.

“Why do we think that, just because a fetus can’t talk or do what we do, it isn’t a human being yet?” asked Lia, in her astonishing speech that reflected wisdom well beyond her years. “Some babies are born after only five months. Is this baby not human? We would never say that; yet abortions are performed on five-month old fetuses all the time. Could it be that we only call them human if they’re wanted?”

When Lia’s parents uploaded their video of her five-minute speech onto the Internet to share with family and friends, the video went viral—more than one million views to date!—and was translated into several languages. It also hit a diabolical nerve, because Lia began receiving death threats.

It wasn’t Lia’s first “life” battle, said Kimberley, Lia’s mother. Early in Kimberley’s pregnancy, twice doctors told her she had miscarried. Then, during labor, Lia’s heartbeat stopped twice. But God had a plan for baby Lia: to one day save the lives of other babies. Several women reported that, after seeing Lia’s video, they chose life for their babies.

Lia, now 15, has produced several more awesome YouTube videos, including Are the Unborn Human?, Are the Unborn Persons?, and Is Abortion Justified in Cases of Rape or Incest? “We can go down in history as the generation that ended the horrible genocide of abortion,” Lia urged her peers. “Everything we do, every little act” will lead to the tipping point of life, liberty, and justice for all—born and preborn!

To learn more: Every Tuesday at 9 p.m. Eastern Time, the PLYC holds a teleconference (call 877-884-6685, extension 22) to answer teens’ questions about forming a chapter or pro-life resources. To schedule Jake as a speaker or ask him questions, e-mail him: [email protected]. Lia is also available for speaking engagements and can be contacted through her YouTube account or by e-mailing Jake.

Can you protest against abortion and still be full of joy? Yes, if you’re part of a pro-life flash mob, exclaimed Peter,* 22, who helps organize these joyful events, which are filled with bright yellow balloons imprinted with “LIFE” and are the bane of Planned Parenthood.

A flash mob is a group of people who assemble, seemingly spontaneously, in a public place. Pro-life flash mobs began in early 2011 when Peter, then an intern with Students for Life of Illinois, got word that a “Walk for Choice” rally would be held in downtown Chicago on February 26, to protest H.R. 3, the No Taxpayer Funding for Abortion Act (passed by the House of Representatives in May). A large flash mob clandestinely gathered at Daley Plaza, and disarmed the pro-abortion clan by suddenly unveiling a few hundred giant LIFE balloons and erupting with joyful dancing, singing, and chanting.

The anonymous, countercultural flash mobs appeal to a teen’s impulse to do something daring, something secretive, something that flies directly in the face of evil— abortion, Peter explained.

Pro-life flash mobs have also sprung up in Texas and at Planned Parenthood’s Teen Capitol DayRally in Sacramento, California. In Detroit, Michigan, a flash mob surprised attendees, including comedienne Joan Rivers, as they arrived at a Planned Parenthood fundraiser.

“They’re there in a flash and in a flash they’re gone,” said Peter, emphasizing that anyone can and should organize or participate in a pro-life flash mob, including seniors. What better way to promote life, he asked, than “celebrating the wonderful gift of life?” You can see videos by searching for “pro-life flash mob” on www.YouTube.com. To learn more or get LIFE balloons, e-mail Br. Chad at [email protected].

1 The number of medical and surgical abortions committed daily in the U.S. is approximately 3,288. Numerous abortions also occur outside of abortion mills, as a result of using abortifacient contraceptives, discarding human embryos during the in vitro fertilization process, and destroying human embryos in research labs. It is estimated that each year, in the U.S., contraceptives alone kill 6–10 million preborn babies (source: Infant Homicides through Contraceptives by Bogomir M. Kuhar, Pharm.D., available from American Life League). For more information on contraception, visit www.ThePillKills.com.—Ed.

Marion Amberg writes from New Mexico and is the author of Penny Prayers: True Stories of Change (Liguori Publications).